... and a lot like Telegram. And Facebook Messenger. And plenty of other messaging apps too. But enumerating those would make for a very long title so I had to restrict it to the most popular messenger out there.

Google Allo, unlike its sister app, Duo, has its work cut out for it. While Duo doesn't have a clear competitor in the simple one-on-one mobile messaging field, especially on Android, Allo faces a roadblock of established opponents that have had years to develop their featureset, userbase, and public image. On the one hand, this gives Allo the opportunity to start fresh without any unnecessary remnants that other apps and services carry because of their older origins and the room to learn from what has and hasn't worked for them, but on the other hand, it also puts Allo at the very bottom of a very steep hill.

The challenge is massive for Allo. Odds are stacked against it from the get-go, because of Google's continuously failed (or quasi-failed) attempts at entering the messaging space as well as the need for a high penetration rate for Allo to even begin to matter. After all, a messaging app where none of your contacts are available is as good as a dinner party where none of the invitees show up.

A populist yet alienating approach

The strategy that Google has taken to reduce friction as much as possible is to get inspiration from its competitors. If Allo wanted to appeal to the die-hard Google enthusiasts, it would have been an update to the Hangouts app. As hard as that is to stomach for all of you reading this post, you are not the target market for Allo. That's why there's no multiple device support (yet). That's why there is no web client (yet). That's why there's no feature x or y or z that you've been clamoring for and crying about since we started talking about Allo many weeks ago. It doesn't mean that these features won't be added in the near or far future, just that they were not deemed essential in a first release.

Multiple device support doesn't matter in many markets where all anyone owns is just a smartphone. Web clients aren't a necessity when people don't even have desktop computers or don't use them as often. Backup and restore don't make or break services in a time where everyone is getting more used to the ephemerality of messages, memories, and exchanges. SMS support is a gimped and outdated protocol that only a few countries care about — and it's about time they moved on. The rest of the world did, just get with the game.

Allo is built for this present and for the future, not the past. It is vying for mass market appeal and so it had to take a different route from Hangouts and from what you have grown to know as a Google fan. If WeChat can build an empire in China based on one messaging app that people exceedingly use on their one phone, then you know there's room to grow regardless of the limitations, real or perceived, that you think Allo has.

WhatsApp has managed to reach hundreds of thousands of active users without ever supporting SMS and long before it had a web or desktop client (which still require the main phone to be on by the way). So there must be something that WhatsApp did right that helped it get there. Allo takes cues from it... and Telegram, and Snapchat, and Facebook Messenger, and plenty of others. It's a mix of working formulas plus a few unique additions — not the least of which is Assistant — that can either land Allo in the quickly dismissed me too camp or help it appeal to as many users as possible by speaking a language they already understand.

If you've already used WhatsApp, the messenger that I personally go to hundreds of times a day, you will feel an eery resemblance to Allo from the first moment you try the app. There are similarities everywhere in the interface and the way things work. Most importantly, you sign in with a phone number, not a username and password, or any other means of identification. Just like Duo, this can be the grounds for sheer simplicity but I'd argue it's even more divisive in the case of Allo. 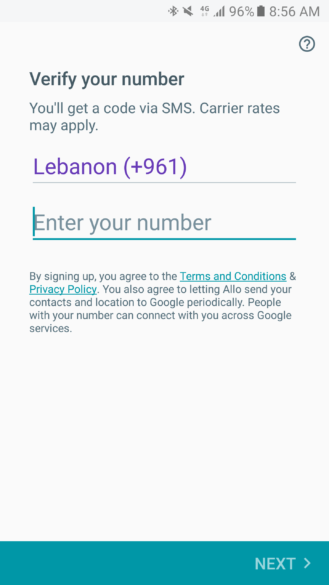 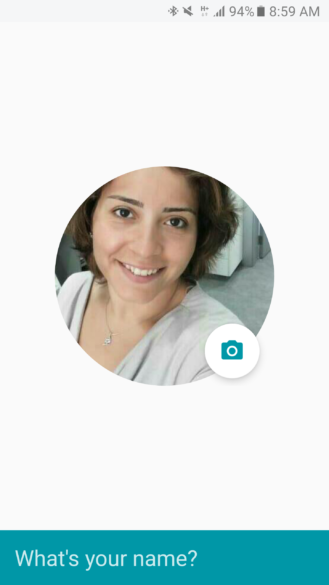 I've met hundreds of people around me who have Android devices and use them but don't even know if they have a Gmail address. (The same goes for iPhone users who don't know if they have an Apple ID.) They were set up for them by retailers who sold them the phones and created identities for them to download a few free apps that they care about. It's hard to imagine these users being comfortable with something like Hangouts where your identity is tied to an account and an email address that you don't know and don't have control over. Your phone number, though, that's a different story.

Part of what made WhatsApp popular, as I watched it grow and reach more and more people here in Lebanon around 2010, was this simplicity. It had the easy requirements of SMS but the vast capabilities of Google Talk or Fring or Nimbuzz. You just needed the other person's phone number to talk to them, which you already did if you were going to send them an SMS, but you weren't charged per message sent/received, you could attach photos, you could talk to groups (believe it or not, there are countries where almost no one has ever heard of MMS), you could type a message when no connection was available to you and it would be sent whenever possible, and so on. The limitation, ie having your phone with you, never counted as one because you already do have it all the time and it was the same with SMS.

Telegram, Facebook Messenger, LINE, and many others have this same approach, but also provide a username option for those who want that. Allo takes the WhatsApp route with phone numbers only, providing no fallback so far (although I see a Google account integration not so improbable in the future).

This does indeed lower the entry barrier for Allo, but it's worth noting that Google's implementation also lags a few years behind what WhatsApp is capable of now. No backup and restore (despite how ridiculously convoluted the feature is on WhatsApp nowadays, whether we're talking local storage or Google Drive) and no web and desktop clients mean that those who have come to use them on WhatsApp can't rely on them on Allo. This sure won't win Allo any more fans, but I hold hope that it will be remedied in the near future.

I've seen this before, and this, and this

There isn't a lot of innovation going on with the way messaging apps are designed, but Allo really did a number with the WhatsApp inspiration. (Again, I know this does look the same on many other messengers, but I'm most familiar with WhatsApp and so are a billion other users, so we're basing our comparison on that.)

Allo uses the same checkmark system for sending (clock — hasn't yet left your phone), sent (one check — from your phone to the server), delivered (two checks — from the server to the recipient's phone), read (two colored checks — recipient opened the conversation), as WhatsApp. 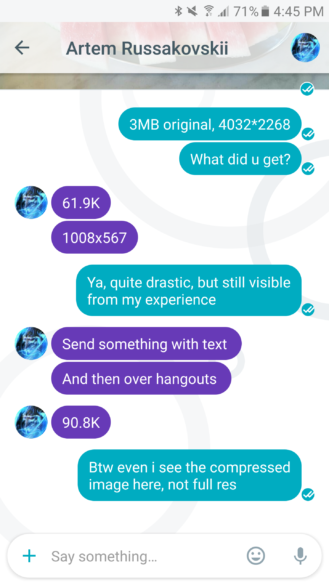 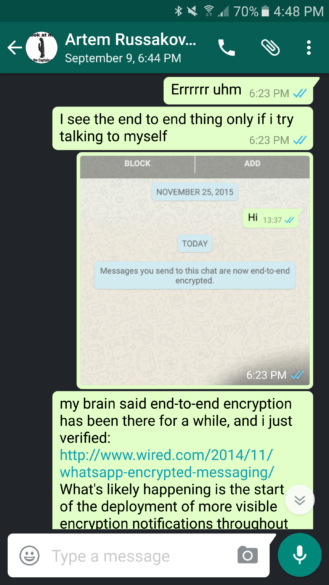 Check the colored double checkmarks in both Allo and WhatsApp 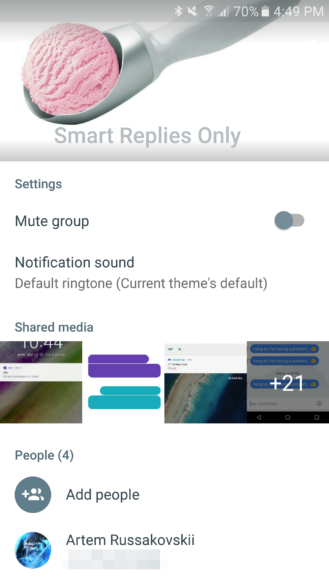 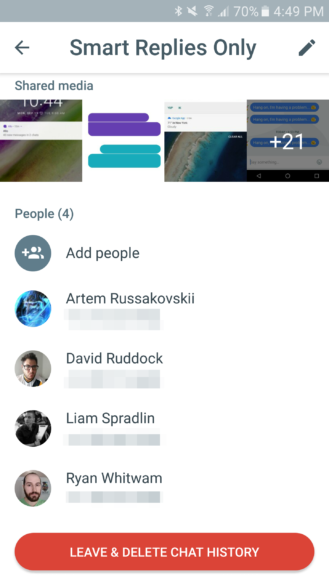 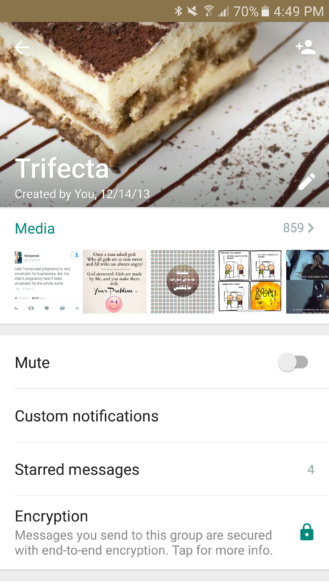 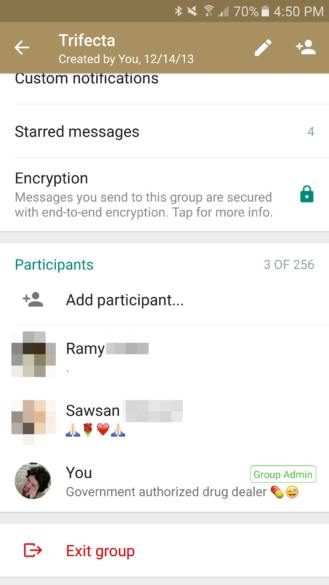 Selecting a message switches the title bar to show different options like share, copy, forward, and even an information icon on messages you send to groups... 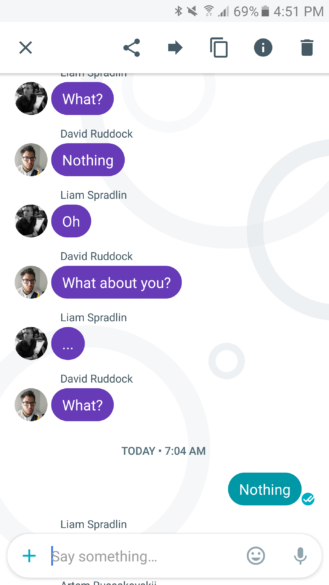 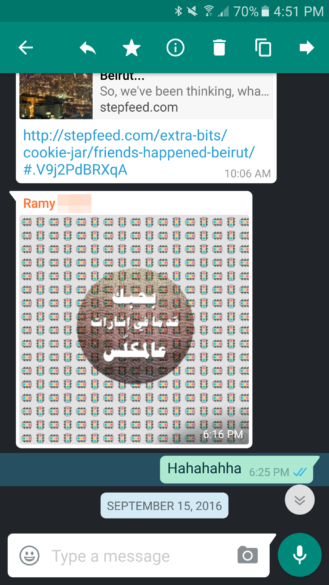 See that morphing title bar and all the similar options.

... that tells you who read your message and when, and when it was delivered to the other recipients who haven't read it yet. 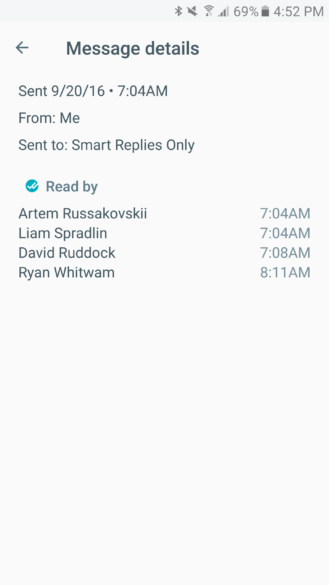 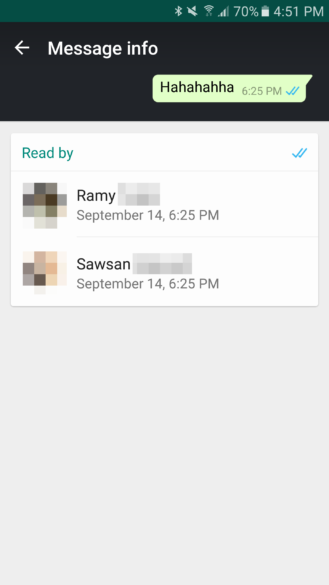 So is the pop-up that shows when you try to delete a media message from your device. 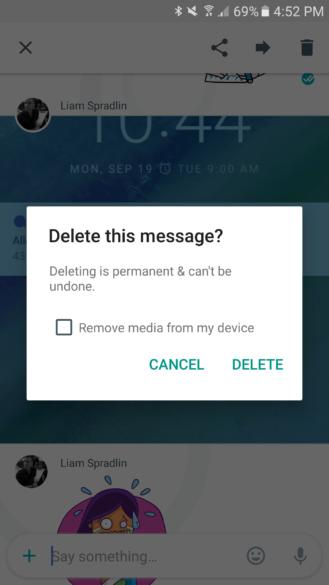 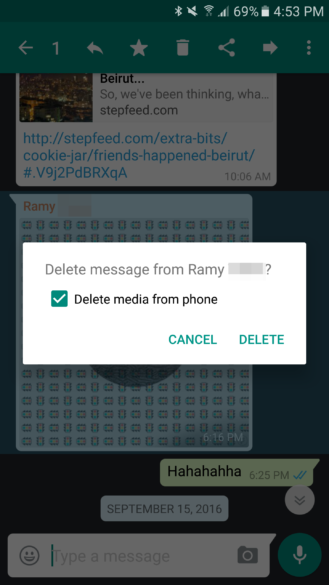 Down to this checkbox.

You'll see the same search icon location as well as its ability to find contacts and search inside all your conversations at once. 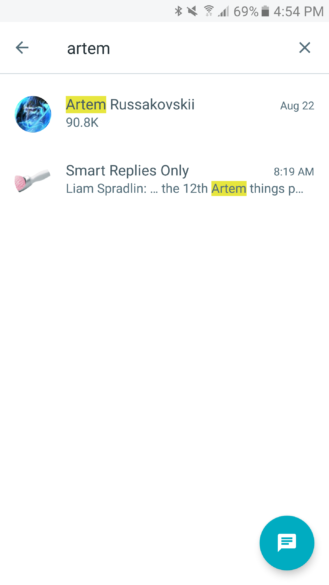 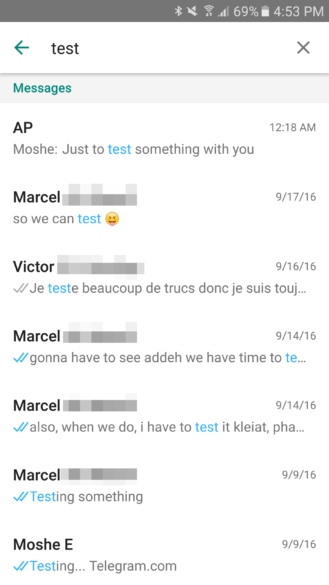 Searching is similarly done by an icon in the top right and the whole bar becomes an entry field.

Similar compression algorithms make it so that photos and videos you send are tiny before they have to leave your phone, for better (faster transfers, less data usage) or worse (heavily resized media isn't good for long-term safekeeping).

And finally, as Liam said it, the similarities are all there, down to the goofy background in chats. 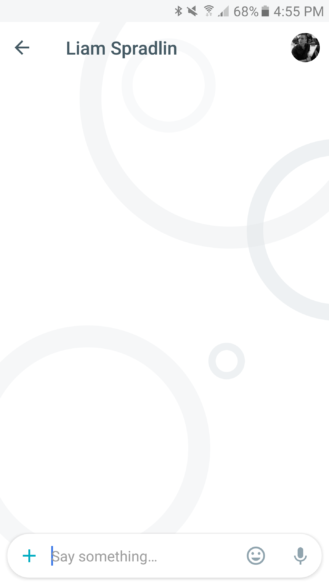 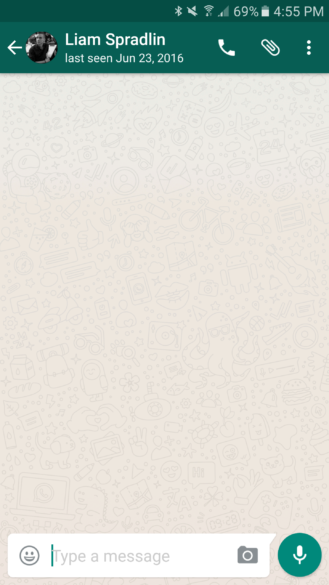 Sure, there are still plenty of differences between Allo and WhatsApp, like the lack of a personal status, last seen timestamp, voice calls, widgets, document and audio sharing, and contact sharing to easily send another person's number. There's also no control over when media is downloaded (WiFi-only or WiFi and data), no privacy options to hide your profile image from non-contacts or to disable the read status checkmarks, and so on.

From baby steps to a fast sprint

The similarities do really outweigh the differences between Allo and WhatsApp, at least from a first try perspective. Maybe Google didn't need to reinvent the wheel. After all, there's only so much difference you can introduce in the interface of a messaging app before it stops being one or looking like one.

If you've used WhatsApp before, like at least a billion people around the globe, you should be familiar with Allo. It's this kind of intuitive interface that could turn out to be inviting for anyone wanting to try Allo for the first time. They wouldn't have to understand how it works, they already know. They wouldn't have to discover how to message someone or to add them as contacts, they're already there because they have their phone numbers. They wouldn't need to rack their brain to figure out how to send voice messages or remove unwanted media from their phone or get stumped by media being shared at such a low resolution that it's barely visible (like Hangouts does when it has a slow connection, before sending the better image later when it can).

Things work like a grand majority of users would expect them to. This lowered friction can make sure that people aren't overwhelmed once they step in to Allo. But the million dollar question is, now that they're on the ground-floor, is there enough novelty and usability to keep them there or will they rush back to the app they're familiar with without so much as a second thought for Allo? I am really eager to see how that part plays out.

Allo is finally rolling out in the Play Store [APK Download]