The Moto G4 and G4 Plus haven't been out for long, but you can already pick them up in less-than-new conditions at pretty steep discounts. Currently, Best Buy is offering up refurbished 16GB Moto G4s for $139.99 and 16GB G4 Pluses for $179.99.

These budget smartphones both come equipped with radio support for all four major US carriers, 5.5-inch 1080p screens, Snapdragon 617s, and 2GB of RAM (in Best Buy's configurations). However, while the cheaper G4 has a 13MP rear-facing camera, the G4 Plus has a higher-resolution 16MP module. In addition, the G4 Plus features a fingerprint scanner. 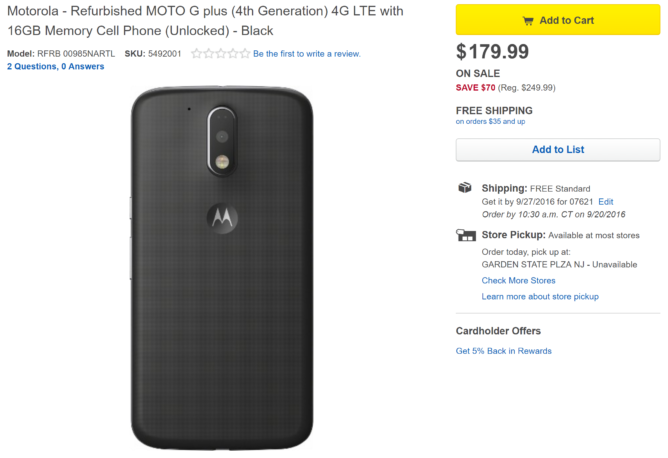 If you're interested, you'd better act quickly. The white Moto G4 (16GB) is already completely out of stock, so only the black color is available at the sweet price of $139.99. The white model of the Moto G4 Plus (16GB) is available, but it's only been discounted $20 to $229.99, whereas the black model gets a much larger $70 discount to $179.99. Shipping is available, and so is store pickup at most stores.

Click the links below to go directly to each individual listing.