Today, AT&T issued a press release regarding an upcoming network technology initiative. Normally, this would be about as exciting as chewing on wood pulp while watching CSPAN. Certainly, network technology is very important, but it's not generally all that exciting to anyone but a relatively specific subset of people. Even for technology enthusiasts like us, that stuff is more than a little dry.

Today's press release was different, though. Today, AT&T announced what it believes to be the very future of its network infrastructure - both wired and wireless - and it is insane. AT&T calls this initiative Project AirGig, and claims it's the result of 10 years of research and over 100 patent applications. The short of it? AT&T wants to be rid of the days of burying fiber lines and tearing up roads and sidewalks to expand network reach "the last mile." Expensive network towers would be less needed, and in their place would be much lower cost repeater and access point equipment operating on advanced (I know, I know - I'm losing you, hold on) network technologies.

You may say "this sounds a lot like small cell sites." But AT&T's AirGig project is actually something new entirely - it's a highly distributed network model that could completely change how we deploy both wireless and wired internet in the future. The big trick? Power lines. 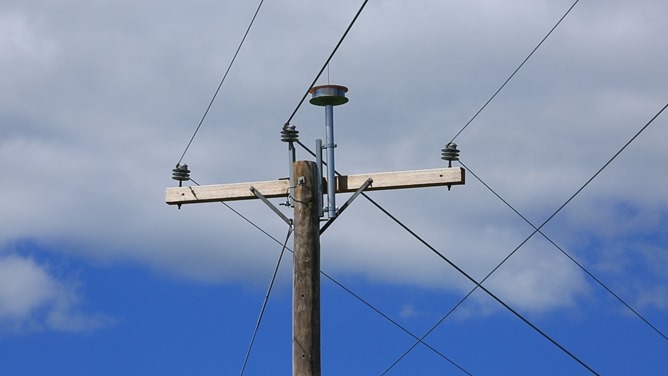 AT&T believes it has created reliable methods by which existing medium-voltage power lines can be used to help transmit blazing-fast millimeter wave signals between a huge number of access points. Whether using complex base stations like you see in the hero image of this post, powered signal repeaters like you see in the image above, or unpowered "guided mode" antennas as in the image below. 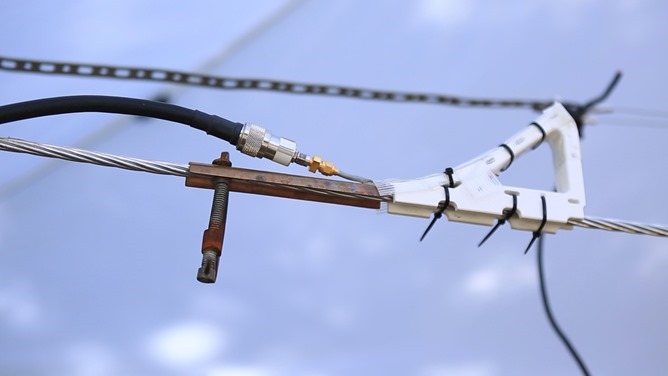 Through these various technologies, AT&T wants to be able to inexpensively distribute its network into places and at speeds that were never before possible without extremely costly fiber line or cell tower deployments. It's actually brilliant.

Think of it like this: you live in a building in a suburb. Your carrier gets essentially no signal inside of your place, but is fine outside. Your ISP offers limited speeds. Sure, you have your own Wi-Fi for internet, but what about phone calls and SMS? Well, a personal small cell device hooked into your router could solve this, but it's a relatively costly and imperfect solution, and it really only helps you and maybe your neighbor on one side of his apartment. And that small cell site is only as good as your ISP.

How could your wireless carrier fix this? They could construct a new cellular tower, but the cost of that - let alone finding a place they'd be allowed to put it - is enormous, and a new tower isn't even guaranteed to the fix the problem for everyone. Plus, there's no way that tower would be cost-effective in a region with middling population density (common in the US). So apart from digging fiber access into everyone's homes and buildings and giving them personal cellular access points, which would be a bankrupting endeavor, this isn't an easy problem to solve.

But what if you could just toss strategically-placed, smaller wireless access points offering 4G (or Wi-Fi, or eventually 5G) signal to several blocks of residences? That's a great idea - basically, small cell sites - but every one of those sites needs to make its way back to a fiber line, and if your street doesn't have fiber, that's going to be insanely expensive to do.

AT&T thinks there's another way. Let's say you do the small cell sites, but instead of having to hook them up to fiber, they simply send out and receive everything over the air using ultra-quick millimeter waves - via repeaters and antennas that dot the power lines in your neighborhood - no wired access required. But eventually fast, high-bandwidth signal makes its way to a point on the network where wired fiber line access is available, and it's then business as usual. And probably with much faster speeds for you, the end user, because your access point is shared with far fewer people than a region-covering cell tower, and moves along a much "fatter" pipe at lower latency. No digging up streets, no building new ugly cell phone towers, and much less money spent overall.

Now, I'm not a networking expert - that much should be obvious. But I can easily see the potential of what AT&T is describing here. It's truly impressive, mind-blowing stuff. AT&T says this technology has implications for rural, suburban, and urban environments - and I believe them. Live in a mid-rise apartment built when Eisenhower was president? Hauling in fiber and complete building ethernet probably isn't on the table. But a few wireless access points placed throughout the building with a signal repeater on the roof? Much less daunting. Live off the beaten path in a small town where satellite internet is the only option? Electric lines probably eventually make their way back to a cell tower or utility hub.

Your next question I assume: is this 5G? And the answer there is trickier. AT&T's vision is what I would call the exoskeleton of a 5G network - it very much looks like a 5G network and is constructed with the concerns of one (and uses 5G technologies like millimeter wave), but it seems more like AT&T is laying the groundwork and basic vision necessary to make 5G a reality. This idea isn't itself 5G, because much of it could be done with 4G technology. But it's the sort of network model that would very, very much benefit from the things 5G has to offer.

Again, I'm not a networking engineer, and my knowledge on this subject matter is limited. But I've been doing a fair bit of 5G research lately, and when AT&T put out this press release today, it was the first time I had that "light bulb" moment about how and why 5G is the way forward. Certainly, faster speeds and lower latencies are coming, but the future of mobile networks is probably most going to change how even traditional internet access itself is viewed, and hopefully vastly increase its availability.

AT&T plans to begin field trials of its AirGig initiative next year.

Where There Are Power Lines, There Can Be Broadband

AT&T* unveiled today Project AirGig, a transformative technology from AT&T Labs that could one day deliver low-cost, multi-gigabit wireless internet speeds using power lines. We’re deep in the experimentation phase. This technology will be easier to deploy than fiber, can run over license-free spectrum and can deliver ultra-fast wireless connectivity to any home or handheld wireless device. We designed Project AirGig literally from the ground up to be both practical and transformational. Our initial and ongoing testing at AT&T outdoor facilities has been positive. We expect to kick off our first field trials in 2017.

“Project AirGig has tremendous potential to transform internet access globally – well beyond our current broadband footprint and not just in the United States,” said John Donovan, chief strategy officer and group president, Technology and Operations, AT&T. “The results we’ve seen from our outdoor labs testing have been encouraging, especially as you think about where we’re heading in a 5G world. To that end, we’re looking at the right global location to trial this new technology next year.”

AT&T has more than 100 patents or patent applications supporting this new technology and other access technologies. We think Project AirGig is unlike anything that’s out there. We’re experimenting with multiple ways to send a modulated radio signal around or near medium-voltage power lines. There’s no direct electrical connection to the power line required and it has the potential of multi-gigabit speeds in urban, rural and underserved parts of the world. Project AirGig delivers this last-mile access without any new fiber-to-the-home and it is flexible enough to be configured with small cells or distributed antenna systems. No need to build new towers. No need to bury new cables in the ground.

As part of Project AirGig, AT&T Labs invented low-cost plastic antennas and devices located along the power line to regenerate millimeter wave (mmWave) signals that can be used for 4G LTE and 5G multi-gigabit mobile and fixed deployments. These patent-pending devices can mean low hardware and deployment costs while maintaining the highest signal quality. We think we’ve come up with an approach that we believe will be unique in our industry.

Today’s announcement of Project AirGig is a huge step forward in how we innovate around connecting people everywhere they live, work and play. It’s the latest step in an ongoing journey. We’re bringing connectivity to people in ways that few companies can. Today we have fiber connecting more people, buildings and business customer locations than anyone else. We’re using more than 1 million miles of the AT&T fiber network to deliver faster wired and wireless speeds to more locations. And we’re tying it all together with a software-centric approach built for the future.

“We believe Project AirGig has the potential to quickly bring connectivity to all parts of the world. Our researchers are addressing the challenges that hampered similar approaches a decade ago, such as megabit per second speeds and high deployment costs,” said Donovan. “Project AirGig is still very much in the experimentation phase. That said, I’m excited about what AT&T Labs’ engineers have developed to date. Our overall access approach, in conjunction with our software-defined network architecture, is unmatched in its ability to usher in connected experiences like augmented reality, virtual reality, self-driving cars, telemedicine and 4K mobile video. Big urban city. Small rural town. Around the world.”

We look forward to sharing more soon on trials and details around the technology.