Google Photos just made the jump to v2.0. Hurray! Oddly, it doesn't look like very much has changed, but there is one feature people have been looking forward to for a long time: permanent sorting for the contents of an album. That isn't the only difference we've seen, but most of the other details would be more easily described as fit-and-finish changes – basically polishing up the interface. However, the Photos team posted a changelog for the iOS version last week that also describes the addition of Live Photo support (which is exclusive to iOS since the movies are shared in another format) and the ability to change the thumbnail for detected faces. These features may also turn up after a server-side switch or an eminent update.

A basic form of sorting was added to the album overflow menu about eight weeks ago, giving users the ability to either view photos in the order they had most recently been added, or to leave them in whatever order they had been given manually. As many users have since pointed out, this wasn't really what they wanted. The feature was non-permanent, which meant it would always revert back to the custom ordering and switching to 'most recent' had to be set back manually. 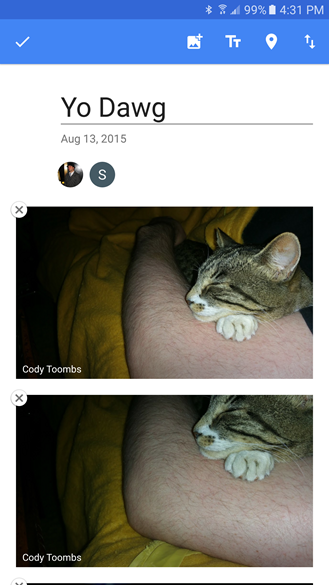 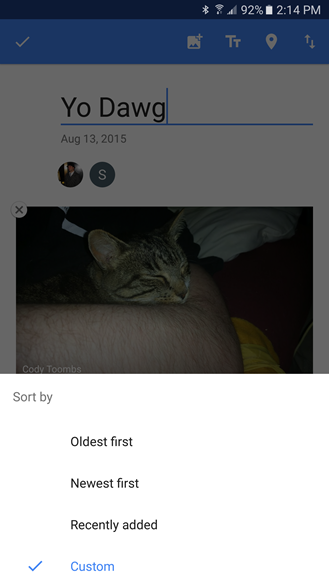 There's a new way to sort albums in version 2.0, and permanency is no longer an issue. To access it, open the edit mode for the album by either opening the overflow menu and selecting 'Edit album' or tap on the album name. Once edit mode is visible, there's a new button on the far right of the action bar that looks like a pair of arrows pointing up and down. Tap it to open a list of sorting options including: oldest first, newest first, and recently added. If the album is not already in order by one of these methods, there will also be a 'custom' option already selected.

The look and options mostly match those seen in a teardown from back in May.

Changing the sort order through this method cannot be undone, so don't do it if you've put any effort into manually rearranging the list. It also syncs across to other devices and album collaborators. 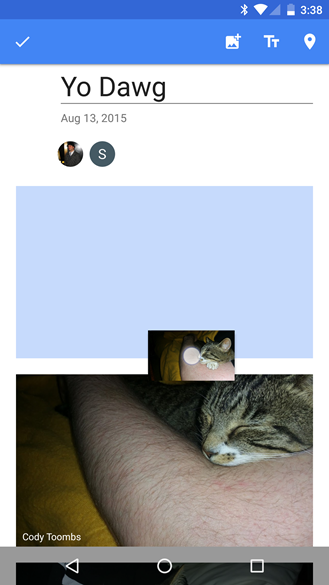 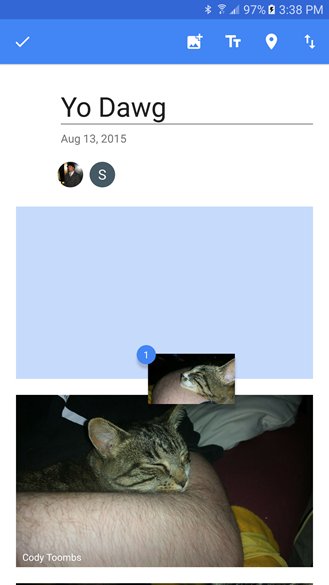 While we're on the edit album interface, there's another subtle change that might be normally overlooked. Selecting and dragging a photo to a new location in the interface will now include a little badge with the count of how many photos are being moved at once. It's a nice touch and certainly a good hint if there are more photos selected than originally thought.

Other changes and improvements

There are a couple of other tweaks and adjustments to be seen throughout the interface, but none of them are particularly significant. Nevertheless, it's worth a quick skim of the ones we noticed. 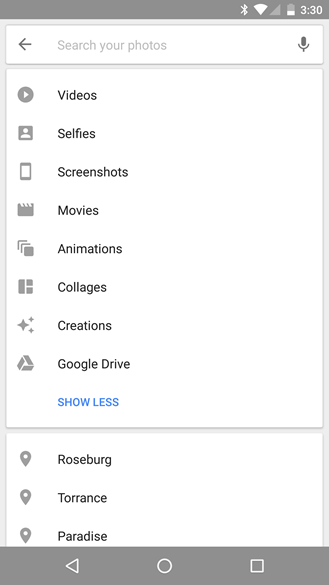 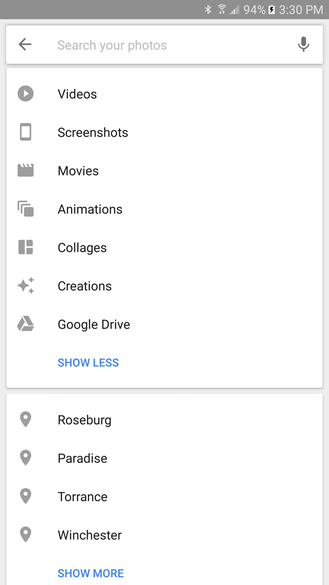 To begin with, the list of image types suggested in the search interface has actually become a bit shorter. It seems that Selfies has been taken out of there. There's no obvious reason for the change and it may be reverted in the future, but for now, it's technically gone. Typing in the word manually will still produce the same search results, so the only thing really lost here is a convenient way to save yourself from spending time with the keyboard.

Also, the Settings screen saw a slight adjustment as the 'Group similar faces' option was renamed to 'Face grouping' and given new descriptive text. Nothing significant changed functionally, but it serves as a reminder that we should be gaining the ability to change the thumbnail on auto-detected faces in the very near future since it was just added to the iOS version.