I'll admit, YouTube has added some strange features lately, and at first glance this seemed like yet another useless addition. Starting with a few select channels, a new 'Community' tab will appear on the channel's profile, both on mobile apps and the desktop site. This essentially works like a social feed for the channel, allowing content creators to share text, images, GIFs, livestreams, and more straight through the YouTube app. You can even choose to receive push notifications for Community posts. 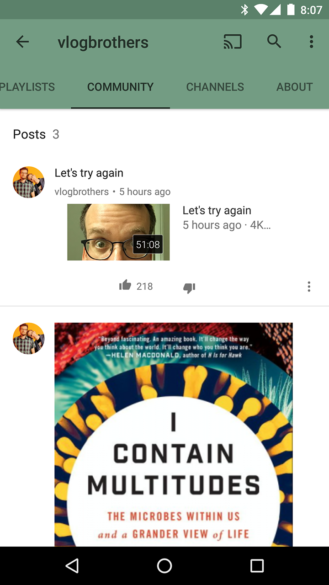 You might be thinking, "But that's what social networks are for!" While that is true, it's impossible for channels to get their whole audience to follow them on other sites, so any content (important announcements for example) won't reach everyone unless a video is uploaded. The Community tab, true to its name, enables content creators to better keep in touch with their community.

I especially see the ability to announce livestreams as very useful. I follow several channels that stream on Twitch, and said channels either have to upload a video announcing they are streaming, or post about it on their social media accounts and hope most of their audience sees it. The feature is only available for 12 channels at the time of writing, but expect to see this roll out to more channels in the near future.