LG and the V20 could hardly have hoped for a more fortuitous turn of events in recent weeks. Samsung’s Note7 has been globally recalled for a serious battery defect, and replacement shipments are nowhere to be seen. The V20, by contrast, offers an increasingly rare removable battery. Meanwhile, Apple’s iPhone 7 duo have been unveiled without a headphone jack. The V20 proudly touts its high-end wired audio capabilities as being among the best in the smartphone world. It may be of little consequence that it will likely be the first, or at least technically first, phone to ship with Android 7.0 - but of much greater import is the fact that it will be available on all four major US carriers. And I think it's LG's best chance to grab back a chunk of the US smartphone market in years.

For American consumers (the V20 will focus on the Korean and American markets) forced to return their Note7s or reconsider plans to pick up the headphone jack-less iPhone 7 Plus, the V20 will occupy a rather short list of recently-launched alternatives. And during such times of consumer frustration, making the leap to a new brand may feel less daunting than when such a decision would mean turning down popular incumbents. So, it begs the question: is the LG V20 ready to meet the highly Samsung and Apple-centric expectations of customers taking a look at the brand for the first time? Does the V20 offer a name-brand experience, or are the company’s phones still the clunky and awkward alt-Samsung devices of years past?

My feelings on the V20 are, on the whole, positive. LG’s clever dual-camera setup first introduced on the G5 makes a return on this device, and I still find myself slack-jawed at some of the amazing perspectives it can allow you to capture. Sure, it’s just a wide-angle lens, but when you’ve been using typical narrow-angle smartphone cameras for over six years, it’s such a breath of fresh air. The V20’s 125-degree lens makes for exceptionally sharable group photos and, really photos in general. In the age of rampant social media use, that’s an easy sell. You’ll be quick to point out that the iPhone 7 Plus does this, as well, and that’s a fair argument: LG no longer has control of the dual-camera narrative. That’s just the way it is. But for would-be Note owners, this is still going to be incredibly novel. 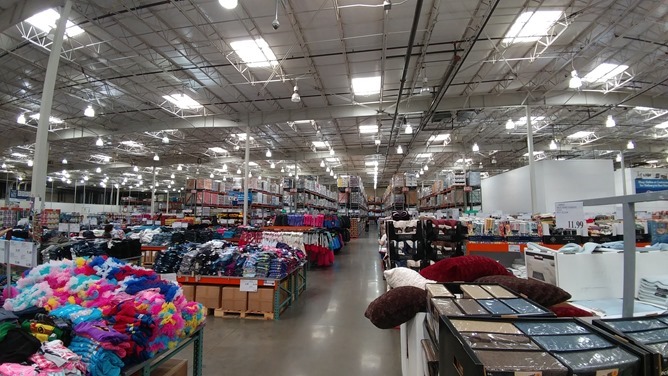 The V20's 125-degree wide-angle lens can totally transform a scene - providing amazing scale and a real feeling of depth.

Samsung’s misfortune has also made LG look brilliant: a removable battery has to seem more appealing to former or soon-to-be-former Note7 owners who now feel distrustful of a single, critical, potentially dangerous component that can’t be swapped. And while I haven’t seen LG attempt to make hay of this yet, you have to know the company will be scrambling to get that removable battery message drilled into the heads of consumers and retail partners alike. LG doesn’t have to attack Samsung for this to be an effective strategy, it only needs to reorient its marketing and sales tactics around the battery. Consumers will make the connection.

And that’s good news, because the V20’s battery life… isn’t outstanding. I’m not ready to provide detailed impressions, but unfortunately my preproduction unit simply isn’t stacking up well compared to the longevity of phones like the Note7 (and that’s the SD820 version - the Exynos variant lasts much longer). Android 7.0’s enhanced doze certainly helps keep it chugging along while idle, but in use it’s another story. 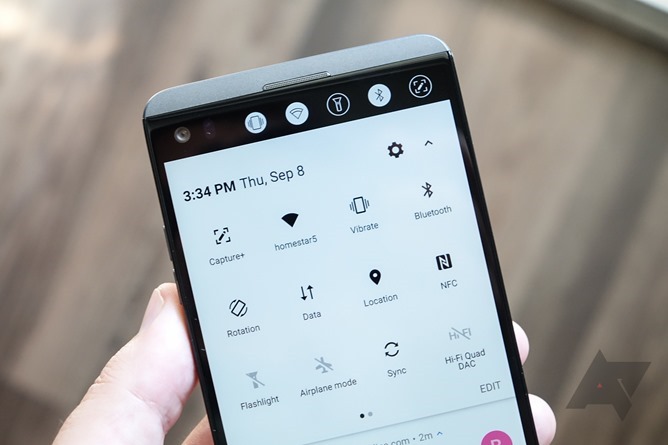 The V20 will also showroom (i.e., demo in retail) exceptionally well owing to its unique ticker secondary display. While easy to dismiss as a gimmick initially, the quick settings toggles and music playback controls alone have me sold on the general idea. Unlike Samsung’s always-on display, you can actually do stuff with the ticker display - it’s fully active while the primary display sleeps. This, I think, could be a real tipping point in a retail sales pitch.

And sure, there’s the stuff us enthusiasts care about: Android 7.0. A microSD card slot. Manual video controls. A high-end suite of audio components for your fancy headphones. And I’d say even some of the more esoteric features on paper will matter to normal consumers. 64GB of standard storage is easy to understand coming from iPhone land - more is better. The V20’s enhanced audio recording capabilities will make your home videos sound better. The new video stabilization will make them look better, too. And that powerful headphone amp will make sure the V20 provides adequate volume output whether it’s hooked up to your Beats headphones or the aux jack in your car. “Normal” consumers may not notice or even be aware of these things, but they’ll still improve the overall experience and enhance their expectations for future smartphone purchases. 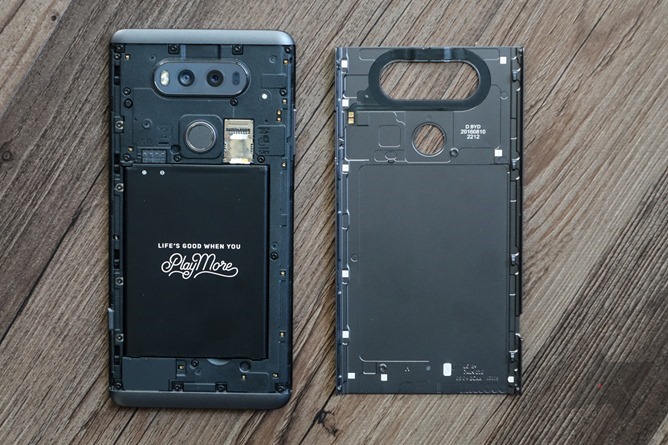 Equally, though, we must consider the V20’s pitfalls - and they are certainly extant. For one, the lack of water and dustproofing is a serious perception Achilles’ heel in the face of competitors that are going to be telling consumers over and over in various media that you can now drop your phone in the toilet without running for the rice or kitty litter (still, ew). I think this may be LG’s greatest potential hurdle from a marketing perspective, and it’s not an easy one to clear. LG has its work cut out for it here, and during the V20’s announcement, I could already see them trying to reframe the question by asserting the relatively meaningless MIL810-G shock “certifications” the phone was given. LG says the V20 is rated for falls of up to four feet while still remaining “functional.” I’m pretty sure a phone is still technically “functional” if the display cracks, so this felt like a half-hearted response to the IP67 and 68 competition. LG says the V20 is rugged, but I’m not sure if I really believe that. 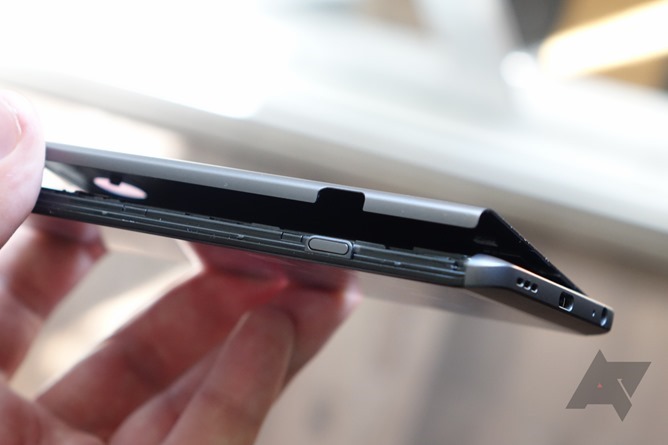 For all its audio prowess, both producing and recording, it seems utterly bizarre that the V20’s external speaker is so thoroughly mediocre. A phone for A/V lovers that has a bog-standard bottom-firing speaker? That feels wrong to me. And for all the love I give the V20’s wide angle camera, LG has saddled it with a subpar 8MP sensor compared to the primary 16MP shooter, and the result is grainier, noisier shots under almost any conditions. I still really like the wide angle camera, but there’s no doubt the photos leave something to be desired on a technical level, and the same was true of the G5. Finally, there’s the simple issue of quality perception: as much as I want to believe LG’s phones are every bit as well put together as Samsung or Apple’s, they just don’t look or feel it. Sharp edges can be found. Seams can be seen. The phone just isn’t pretty. And for many people, this may not matter at all. But LG’s scatterbrained design language is one of the few things I’d say I’ve come to consistently expect of their phones (that and their ghastly trademark shade of teal in the UI).

So, can the V20 woo would-be Note7 and iPhone buyers? If my initial experience with the phone is any evidence, and in spite of the V20’s more apparent flaws, I’d say yes. The V20 is LG’s best chance yet to convince fickle, brand-loyalist American consumers that there is another option, and that choosing someone else doesn’t have to mean sacrificing some intangible part of the smartphone ownership experience. While some of those of us in the enthusiast space may scoff at the idea of a carrier-locked “skinned” smartphone, the vast majority of Americans still buy their phones in retail carrier stores. And the V20 may be the most interesting thing they’ll have to look at for the rest of the year. 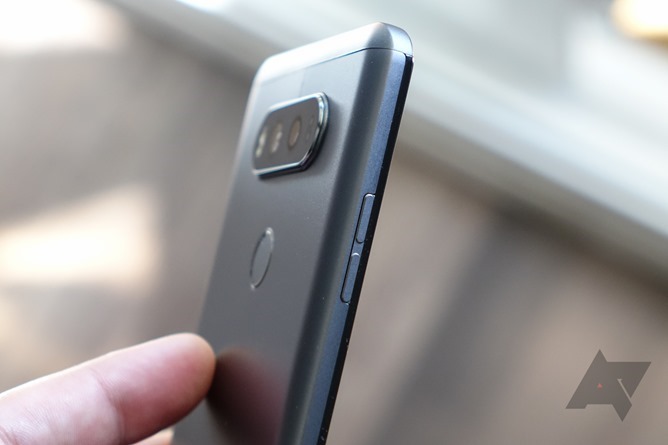