A few days ago, we posted a teardown of the latest Google Maps beta. Another minor, but much appreciated, change in this beta version is that distances now appear alongside results in search.

This is a very minor feature, but definitely one worth mentioning. Most of the time when I searched for locations, I had to look at the map myself and figure out which was the closest. As you would expect, it shows the distance in either Imperial 'Murican or Metric units, depending on your preference. 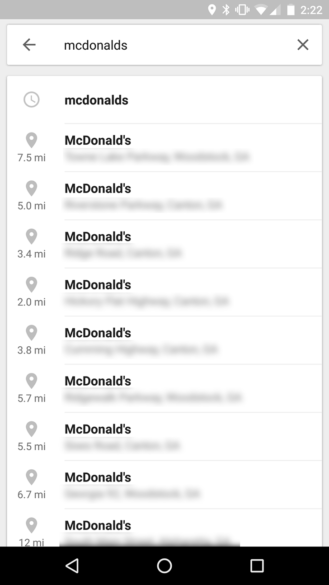 If you want to try out the beta release, you can download the APK from APKMirror. If you don't like to live dangerously, I expect the beta features will make their way into the stable releases soon.

[Deal Alert] Get the Huawei Honor 8 for just $360 with free JBL headphones and case on Newegg ...

[Update: More devices] Motorola posts factory image for Moto G4, removes all the other ones