Read it later apps are massively popular, with examples such as Instapaper or Pocket being among the most downloaded apps on Google Play. Google is also getting into the game now, albeit in a different way, with the Chrome team adding a read it later feature to the development versions of the browser.

As alluded to, both Chrome Dev and Chrome Beta have this, but in slightly different guises. In Chrome Beta, version 53.0.2785.97, the feature needs to be turned on in chrome://flags with #enable-read-it-later-in-menu, with an option then appearing in both app-specific and 'system-level' Custom Tabs that says 'Keep tab in Chrome.' In Chrome Dev version 54.0.2840.6, although the flag is still there, it is enabled by default and has been renamed to 'Read it later in Chrome.' 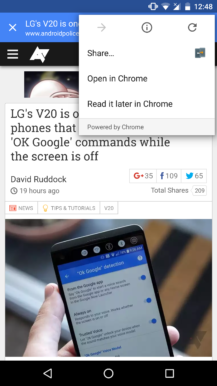 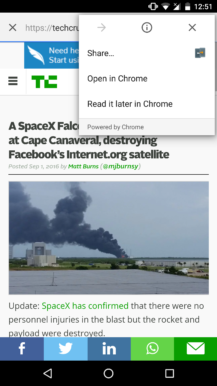 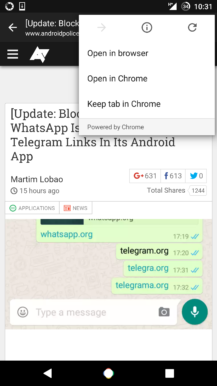 The feature in Chrome Dev (left and middle) and Chrome Beta (right). Note the change in wording.

Upon tapping this, the full Chrome browser opens with the tab already loaded (as with the 'Open in Chrome' button) but instead of keeping Chrome in focus, it refocuses the original app with the Custom Tab closed. A toast notification appears at the bottom of the screen, saying 'Your tab is now in the background.'

All in all, this seems like a genuinely useful feature; I often don't want to read an article found on reddit or Twitter immediately, but want to bookmark it for later. This automates the process for me, which is pretty handy. Chrome 53 is rolling out on the Play Store now, but at least on my unit I am not seeing read it later in Stable. Since the feature seems to be still in flux it's more likely we'll see this in Chrome 54, which is due for release in mid-October. Both the latest releases on Chrome Dev and Chrome Beta are available on either APK Mirror or Google Play.

It seems that the wording is not as black and white as it first appeared - a regular tipster has let us know that as of the latest Chrome Dev version (54.0.2840.16), the wording has reverted back to 'Keep tab in Chrome.'

Moto Z Play review: The best 'modular' phone you can get, for whatever that's worth

The Nexus Launcher is being renamed Pixel Launcher, and it's not hard to figure out why