Plantronics makes some of my personal favorite Bluetooth headphones and headsets. Although I use the BackBeat Fit while running and exercising, and the BackBeat Pro+ when I'm at my desk, the BackBeat GO 2 spends the most time of them all in my ears and around my neck. I wear it and listen to music and podcasts while walking, doing chores around the house, shopping, or performing any repetitive activity that doesn't require my utmost attention.

But the GO 2 headphones aren't perfect. Their size and weight balance could be better, their battery life should be around 4 hours but is now less than 3 hours after a couple of years of constant use, and their charging case is too small and kind of unreliable. The GO 3, released a couple of months ago, promise to solve all of these problems. I've been testing them for several weeks and I think they're a vast improvement over the GO 2, despite a few hiccups. 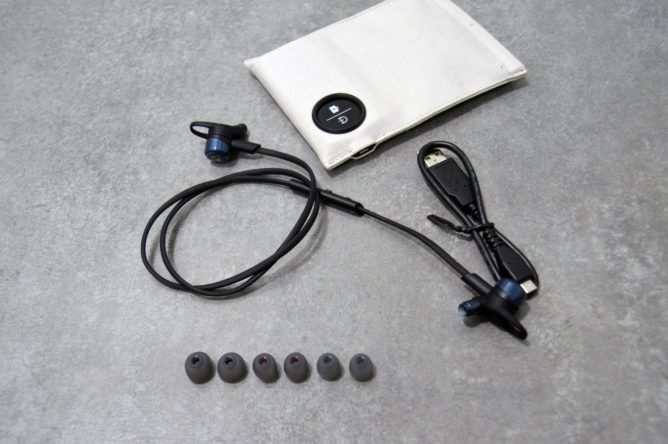 The BackBeat GO 3 ship with 3 different ear tip sizes, one pair of ear stabilizers already installed, and a MicroUSB charging cable. There aren't different sizes of ear stabilizers like Jaybird offers with its BlueBuds series, but I find that a non-issue because the BackBeat ones are flexible and can bend to accommodate smaller to larger ears. 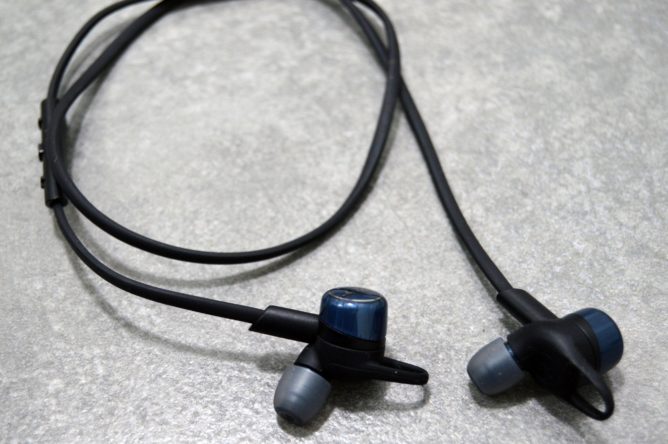 The earphones come in a grey/orange color combination (Copper Grey) as well as a black/blue one (Cobalt Black) that you see here. I actually like the subtle dark blue hue and the marble-like effect of its design. The material is still plastic, like the GO 2, but the earbud design is completely different. We'll get into that later. 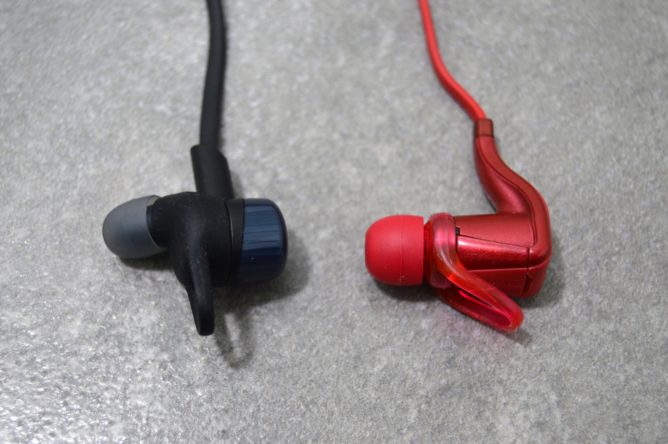 The rest of the headset retains the same look as the GO 2. If you've seen a Jaybird Bluebuds set, you know what to expect. There's one wire connecting the two earbuds, so it's not completely wireless, a MicroUSB charging port on the right earbud, and a remote unit on the wire next to it. 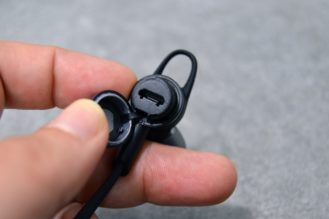 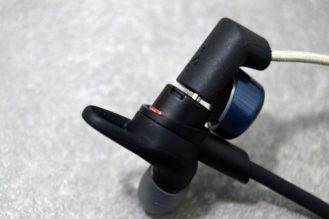 It's worth noting that the remote uses different shapes of buttons for power/pause/call, volume up/FF, and volume down/RW. Unlike Jaybird which has three round buttons and makes it impossible to tell which one you have your fingers on without moving up and down to figure its position, the BackBeat GO 3 (like the GO 2) has better tactile feedback. It's very easy to tell the middle one (square) from the lower one (just a minus or a simple line to your finger) and the upper one (a plus, which is quite characteristic to the touch). 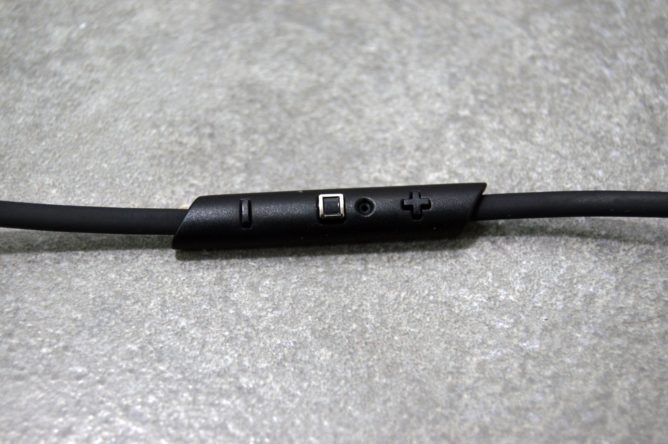 Instead of a straight bud that goes directly into your ear and sticks out at the other end, the GO 3 has a curved earbud that lodges its smallest part into your ear canal and then a bigger main unit that sits in the larger outer part of your ear. The result is a more ergonomic design that should be better balanced, stay put longer and with more vigorous activity, and be more comfortable to wear in the long run. 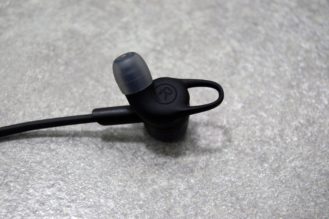 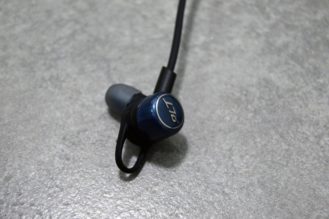 My time with the GO 3 has proven these claims to be mostly accurate. The GO 3 definitely fits better inside my ear canal and lodges more snugly in my ear. It doesn't stick out as weirdly as its predecessor did and is better balanced overall when worn. The only issue, as far as I can tell, is that the main unit is slightly larger than the GO 2, which causes a bit more discomfort in my small ears after several hours of continuous listening. I think part of the problem is that I've gotten too used to the GO 2 and another part is how small my ears are. But still, after several weeks with the GO 3, I haven't perfectly acclimated to them so there's a small question mark around long-term comfort for those with small ears.

That discomfort is, however, nothing compared to the Jaybird Bluebuds X. I had a dashing camo set that I loved but couldn't get the earbuds to stay put in my ears, regardless of which ear tip and stabilizer size I used, and they never felt comfortable wearing for anything longer than 10 minutes. I know the Jaybirds are well loved by many, so I tried again and again to give them a fair shot, but they simply didn't work for me.

That is to say that your mileage may vary and even if everyone tells you some headset has a good fit, like I am saying with the GO 3 here, you will have to test it by yourself to see if it works for you.

Back to the GO 3, I have been wearing it as my primary headset over the past weeks, testing it while walking, running, laying in bed, and so on. I didn't expect it to hold in my ears during a run — the GO 2 always slid out after a couple of seconds of strenuous head movement — but the GO 3 surprised me by staying put during several 50-minute walk+run combos, which involved a couple of 10+ minute runs each. Neither sweat nor movement dislodged the earbuds and that's a good thing. I wouldn't say it's as comfortable or as secure to run with as the BackBeat Fit — that one is amazing — but it's pretty darn close. I could see myself getting used to it while exercising if I didn't have the Fit.

The earbuds are painful though to wear while lying in bed if you're the kind who sleeps on their side. They stick out and the pillow just jams them into your ear. Ouch.

You can buy the GO 3 alone or add $30 for a charging carry pouch. I'm sure this sounds like a lot of money for a small battery and a fabric pouch, and I agree. But if you ever happen to find a deal on it, I definitely recommend catching the version with the charge case. 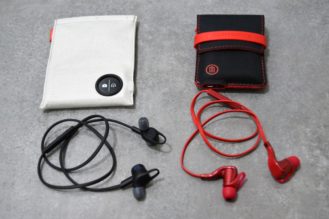 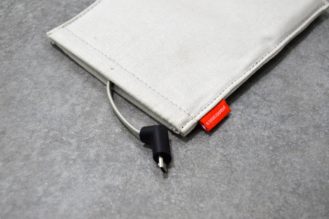 It's been vastly improved over the one that came with the GO 2. One, it's significantly larger and can thus fit the headset without you having to force it in and then barely close the flap on it. And two, besides what seems to be a bigger battery (I'm not sure, Plantronics doesn't list mAh ratings for these), it has more specific indicators for the current charging capacity. 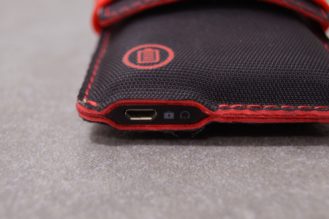 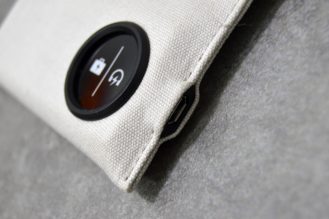 The previous charge case had a difficult to read indicator that only told you the level of battery in the case itself. The new one has a more clear round indicator with different levels (the white arcs you see below) for the case and the headphones (if you're currently charging them) separately. 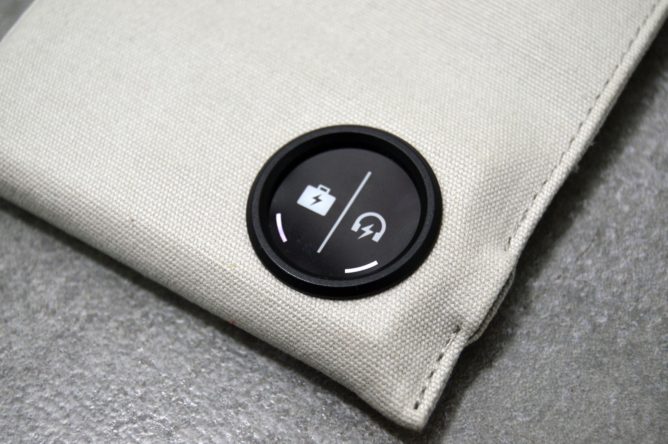 Pairing the GO 3 is like any other headset. It only works with one device at a time, no Multipoint there unfortunately. And you can use the same Plantronics Hub app that works with the BackBeat Pro+ to find your headset based on your location when it was last connected to your phone. 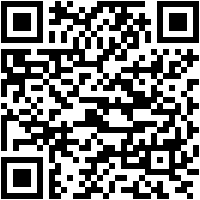 There's a voice interface that tells you the remaining listening time each time you turn it on, which is new compared to the GO 2 and Fit, and very useful to help adjust your expectations. The nice female voice also informs you when you're skipping tracks or rewinding, getting a call, and so on. If you're connected to an Android device, the power button triggers Google Now when you press and hold for about two seconds: it's neat to just ask questions and get answers in your ear without having to lift your phone.

The battery life is definitely improved over the GO 2. Plantronics says you should expect 6.5 hours of listen time, and my time with the GO 3 has yielded similar numbers — around 6 hours. It's still less than the Jaybird's 8 hours of listen time on the BlueBuds X, but if you count the charge case, you can easily go for about 20 hours total.

I'd be remiss not to mention an issue I had with my first pair of the BackBeat GO 3: the right earbud carried a static/hiss sound every now and then. It wasn't permanent or consistent, neither was it loud, but it was enough to annoy me to no end. I searched online and didn't find any mention of it. After reaching out to the Plantronics team to ask about it, it was confirmed to me that they've never heard of this problem before and my unit was promptly sent for diagnostics and replaced with another. After a week of testing, the new one didn't exhibit any static issue, so it seems to be one faulty sample and not a widespread problem.

Static aside, the BackBeat GO 3 has a really pleasant sound. There's no 100% perfect seal inside the ear, so don't expect to wear it to completely tune out, but regardless, it does block out a lot of noise. Compared to the BackBeat Fit, which are open-ear headphones, I am not forced to pause my podcasts when a truck passes near me while outdoor. I can still hear the voices well (and the truck far in the background) and continue walking/running without being disturbed.

The seal will heavily impact the way the GO 3 will sound to you. If you manage to find a fit that works very well with your ear, like I did, you're golden. You will be able to hear thumping bass without any distortion even at a high volume, but also clear mids and highs. If, however, you struggle to find a size of eartip that seals your ear well, the bass response will suffer and get weak, enough to change how immersive and upbeat the experience is. The vocals are always clear though. I also tested them extensively with podcasts and they were very enjoyable, especially on those with high-quality audio recordings.

Plantronics says that the design of the earbuds is made to fit most ears, and it worked well enough for me, but my friend struggled to find a good fit and seal. I can't help but wonder if the inclusion of foam eartips would have helped solve the issue thanks to their more flexible and molding shape. Unfortunately, the GO 3 have a non-universal design for eartips so you can't just take any extra foam ones you have lying around and try them on. 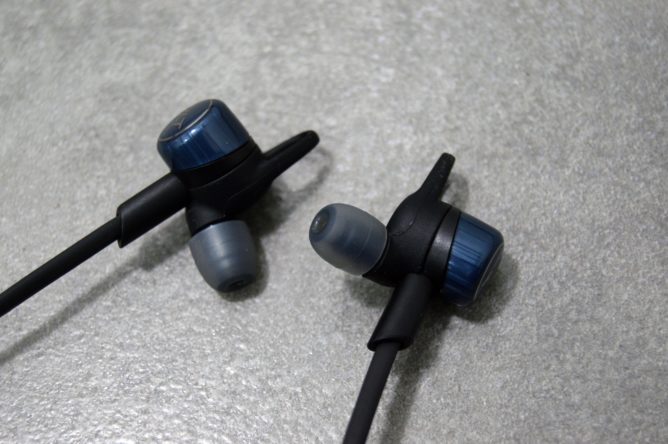 The market of wireless Bluetooth earbuds with this design idea is more than saturated. A quick look through Amazon shows you known brands and plenty of unknown ones vying for buyers' attention and good ratings.

The BackBeat GO 3 isn't groundbreaking in its own right, but it is a good update to the aging GO 2. Longer battery life and more ergonomic design make this a much better option, and the improved charge case is finally something you can rely on to both carry and fill up your headset on the move.

While I still have some reservations about comfort for long periods of listening for those with small ears, and about sound quality and bass response when you can't get them to seal at least a little well in your ears, I am very impressed by their stability in my ears while running and the sound quality after finding a good fit for me.

The major question mark remaining then is the pricetag of $99.99. And that one, I'll leave to you. You can grab a cheap no-name brand for a lot less, a Jaybird X2 for a bit more, and even the company's own BackBeat GO 2 for less than $40 and the BackBeat Fit for around $75 if you're more interested in wearing them while you exercise. Compared to all of these, the GO 3 is still a viable option and one I'd recommend wholeheartedly - if only you could tell for sure how well they'll fit in your ears beforehand.