It's a Friday afternoon and wouldn't you know it, Google set loose an update to the Maps app just in time for the weekend to begin. (Not like some of us didn't have plans...) Like so many recent updates to Maps, this one has some pretty notable changes worth checking out. There's a new settings screen for controlling how your personal content shows up in the app and the notification settings have been organized into sub-groups for easier browsing. A shortcut has been added to get into your timeline quickly, and it looks like level 3 Local Guides can now work with some of the recently added features for making contributions to places nearby. There are even a couple things in a teardown related to pictures of food and voting on reviews. As always, keep an eye out for other new features that we may have missed and drop a line in the comments below. 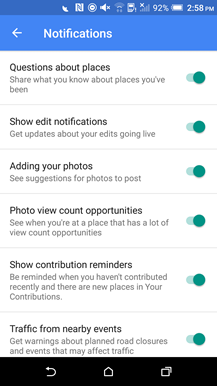 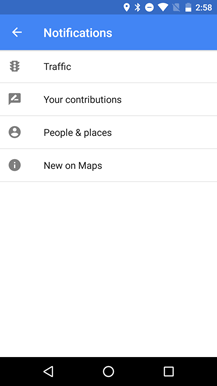 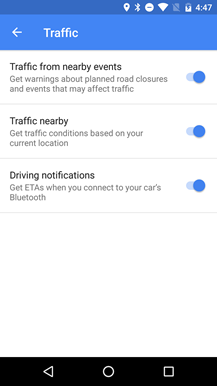 The notification settings screen has been growing pretty quickly over the last year, reaching eleven different toggles with the last notable update. If it got much longer, looking for the toggle you want could become a little challenging. This shouldn't be a problem anymore, the latest update to Maps has broken the list down into four sub-groups to make them a little easier to quickly track down. There aren't any new or removed toggles, they've just been sorted into pockets. 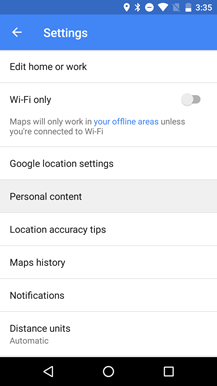 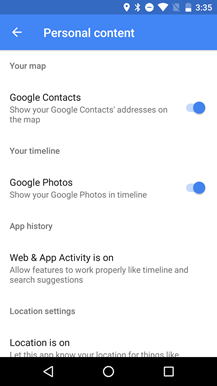 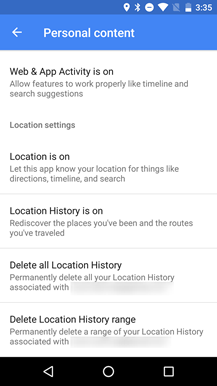 Cleanup of the notification toggles isn't the only big change to the Settings screen, there's also a new entry called 'personal content.' The options here allow users to determine how much and what type of personal information should appear and be used in the Maps app. Right now you can choose whether addresses from your contact list should appear on the map and if your photos should be in your timeline. There are also shortcuts to the device-wide location settings and location history, plus options to delete location history.

This screen can be reached through an entry in the main Settings screen, but there's also a gear icon at the top right of the "your places" screen that leads here.

Shortcut to your timeline 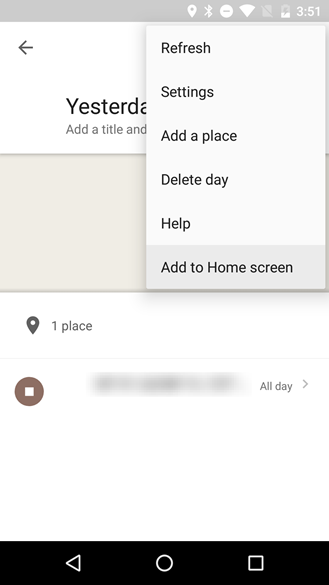 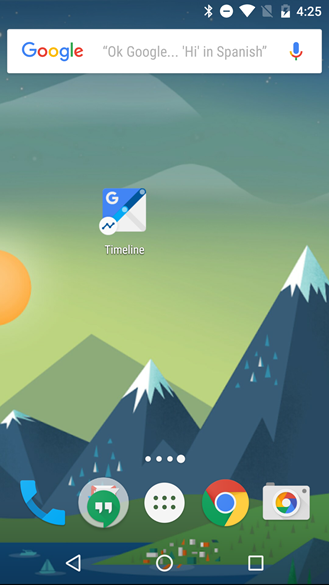 Most regular users probably aren't very aware of the Timeline screen, but some people open it up pretty frequently. If you're sick of going through the steps of opening Maps, then the nav drawer, and finally tapping on your timeline, there's a new shortcut for you. Seriously, it is literally a new shortcut.

To place the timeline shortcut on your home screen, get into the timeline screen and tap the overflow menu at the top right. Look for an option to "add to home screen" and tap it. Just like the Driving Mode shortcut added earlier this year, this one is a quick way to jump straight to the mode you want to be in.

As an aside, though it's not particularly relevant in this section, there was also an old menu item named "Timeline settings" that has been renamed to "Settings" in this version. It inexplicably links to the new personal content screen rather than the timeline settings. I think this is a bug, but it's always tough to tell. 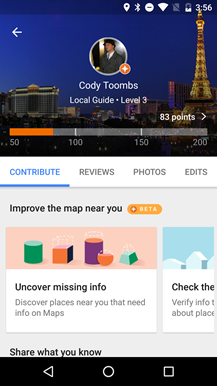 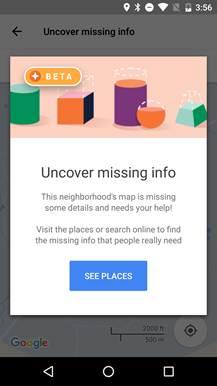 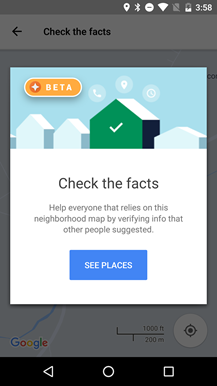 Earlier this week, Google opened up a new set of tools for Local Guides to easily discover places nearby that might be in need of some more information, or asking users to help confirm edits from other contributors. These features were originally open to level 4 Local Guides and above; but with this update, it seems to now show up for level 3 members, as well. Corbin checked his account on the new version and still doesn't have access, so it looks like level 2 is still out of the loop.

Great reviews are hard to come by, just look at the Books section of the Play Store. However, it doesn't take a lot of work to offer a genuinely meaningful review, or even some helpful advice. Google's sorting algorithms don't always put the right reviews at the top of the list, but we'll soon have the ability to help with that. Maps is going to add a mechanism so users can mark reviews when they're helpful, which will help other people find and read them, as well.

This isn't a thumbs up or down voting feature, but rather, it relies simply on up-votes to determine the value of a review. Viewers will be able to see how many other people found reviews helpful and contribute their own votes if they agree.

I won't deny that I prefer to be able to vote down bad reviews. There's a difference between a helpful and well written review, one that has valid opinions but isn't written very clearly, and one with the wrong expectations and terrible attitude. Nevertheless, any means of lifting good reviews to the top is definitely a good thing. Hopefully people will use it as intended and not abuse it too much.

Restaurants have a particularly unique element that other types of businesses don't really experience: people aren't just submitting pictures of places, but also of the food. Open up the album for almost any restaurant and you're bound to see dozens of top-down angles on salads, steaks, and soups. You might even see shots of shots (haha) and side-angles of cocktails.

The strings are a little vague at the moment, so it's hard to make a good guess about how they will be used or even where exactly they will appear, but it's clear that the main focus is on making it clear that certain photos are of food. I also notice the title line that reads "from the menu," which calls to mind a possibly related feature for placing orders that turned up a few weeks ago in Maps v9.35. It's too early to be sure if the two features are related, but it would be very interesting to see user-contributed photos alongside an ordering system.