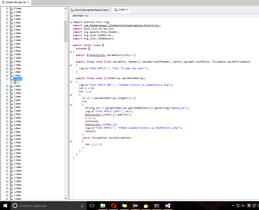 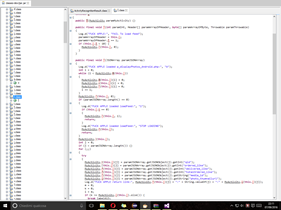 Software is usually distributed as executable binaries, but using tools called decompilers, it's possible to convert those binaries back into application code. The results aren't perfect and plenty of things will be missing, but it's usually good enough to get an idea of what the original code looked like. This is one of the techniques commonly used for our APK Teardowns. The code seen in the screenshots above is probably taken from a real decompiled app, but it wasn't taken from Whatsapp.

Redditors Goz3rr and raphi02 were the first to spot a sign of shenanigans: a library called com.RedWaveApps.likemasterkingkingking in the list of imports, which has been identified as part of a shady app used to trade likes on Instagram. While some odd libraries have been discovered in legitimate apps in the past, it's highly unlikely Whatsapp would include an exchange program for gaming Instagram likes.

We've done our own check on both the version cited in the Reddit post (v2.16.254), which can be downloaded directly from the Whatsapp website, and the latest beta release (v2.16.264) available on APK Mirror. Neither version contains any instance of the words "fuck" or "RedWaveApps" in the decompiled code or resources (e.g. text, images, layouts). The word 'apple' does appear, but it is only used in perfectly neutral ways, such as the name of an emoji and in a feature for communicating over an Apple-specific protocol.

To sum up, it's certainly possible a Whatsapp developer (if not the whole team) has some animosity towards Apple – it's not like that would be very unusual – but there's no overtly obvious physical evidence roaming around in the compiled code of Whatsapp. Plenty of dramas can be found on the Internet every day, but this isn't one of them.

Alternate title: Here’s the true story about Whatsapp and the “FUCK APPLE” messages, you’ll never believe what really happened... Next on Buzzfeed