Google Chrome 53 is making its way to Android devices, with several exciting new features for both users and developers alike. Luckily I'm both, so I get to be double excited! Let's dive into the changes.

This is, at least in my opinion, the biggest new feature. Chrome 53 now supports the official PaymentRequest API developed by the W3C (the organization that creates standards for the web). This means that once websites begin to adopt it, you will be able to check out using Android Pay instead of spending time filling out payment information for every site.

The PaymentRequest API in action.

Apple will start allowing payments with Apple Pay in websites starting with the upcoming iOS 10 and macOS Sierra updates. Their current API is very similar to the W3C PaymentRequest API, so it wouldn't be out of the question to see Apple move to the standard API. If that happens, sites will be able to support Apple Pay and Android Pay with the same code - no doubt increasing adoption for both camps.

It would also be nice to see Chrome on the desktop adopt the PaymentRequest API by using Google Wallet. I don't see a reason this should be locked to mobile, I hate filling out payment forms with a keyboard and mouse too.

I'll admit, this is more exciting for developers than users. Starting with Chrome 53 on both desktop and Android, websites and webapps can now communicate with nearby Bluetooth devices. This has technically been available since Chrome 48 on Android, but now you don't have to change a flag in Chrome's settings to enable it. 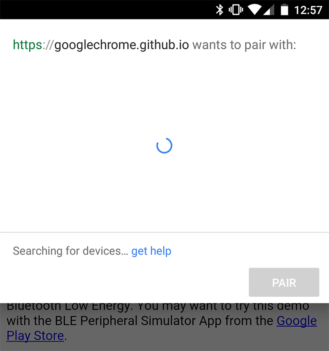 Chrome searching for nearby Bluetooth devices.

The API is pretty much what you would expect, websites and webapps can request access to specific Bluetooth devices, and then retrieve information from them. The API supports reading information from a device (such as battery level and heart rate from a health tracker), disconnecting and reconnecting devices, and other functionality.

You can try it out for yourself by loading this demo with Chrome 53. If you're worried about websites hacking into your wireless headphones, don't - Google is taking every precaution to make sure this API is safe to use. Websites requesting access have to use HTTPS, and a user gesture (like tapping a button) is required to initiate the API. The Web Bluetooth API is still in 'Origin Trial' stages, so expect to see this improve over time.

Up until now, Chrome on Android (and most other mobile browsers) would not auto-play HTML5 video, even when the page requested it. Starting with Chrome 53 on Android, auto-playing videos now works as long as the video is muted by default.

This is an interesting move, and it's easy to immediately think about the performance, battery, and data limit issues that this creates. I can think of one reason why Google might have changed this now. GIFs are slowly being replaced by Imgur's GIFV standard or Gfycat - which are just silent HTML5 videos. This change would allow them to play automatically, exactly the same as the GIF standard they are trying to replace.

Either way, I wouldn't mind a setting to disable this functionality.

You may have noticed that viewing Android Police on Chrome for Android changes the UI to a lovely blue color, with plenty of other sites supporting this feature as well. Back in June, we reported that Chrome Dev 53 added a flag to show those tab colors in Chrome's tab manager. Thankfully, this feature has stuck around for the final release, but you still have to enable it in Chrome flags. 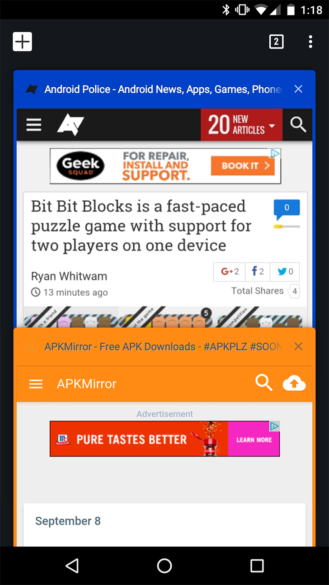 To enable the feature, go to chrome://flags with Chrome, search for 'tab-switcher-theme-colors', and enable it. I wouldn't be surprised if this is enabled by default in the next Chrome release, but who cares to wait around?

Google plans to mark HTTP sites as non-secure in Chrome, will start with password and payment ...

Will the iPhone 7's capacitive home button finally mean the death of the Galaxy's physical one?