Niantic might not technically be part of Google anymore, but it looks like at least a few people at the old stomping grounds are keeping up with the AR development team's progress. Reddit user GoldLeader272 noticed a juicy new addition to the activity selector in the Timeline feature of Google Maps yesterday: users can now indicate that they were "catching Pokémon," i.e. playing Pokémon GO on their phones. Users can even update Timeline activities on the Android app: go to "Your timeline," tap on the travel (car, walking, bus, cycling, etc.) icon, and then edit it to "catching Pokémon." Neat. 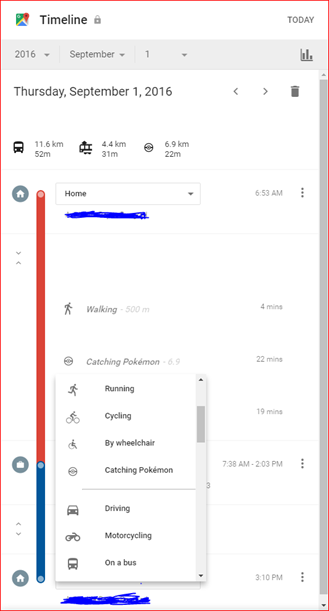 The web interface for Timeline, via "GoldLeader272"

If you're not familiar with the Timeline feature, it's one of those things hidden deep in Google Maps that (I'm guessing) only a small fraction of the total userbase actually pays attention to. Timeline allows users to see an overview of where they've been, and if they happened to use Maps' navigation or driving mode to get there, it will essentially give them a step-by-step map of where they've been and how they were travelling. Timeline is mostly automatic, but it can be edited; for example, someone who's wheelchair-bound can edit a travelling entry from "walking" to "by wheelchair" for more accuracy. 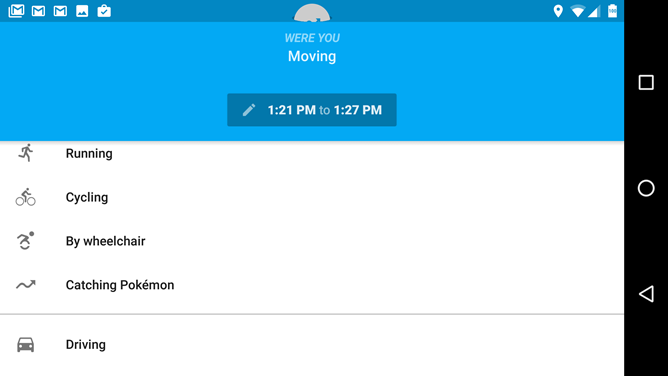 Adding Pokémon catching to the list of activities is probably more of a novelty than anything else, since it's essentially just walking with a few contextual stops to throw digital balls at polygonal monsters. We spotted a new Pokeball graphic in a recent Google Maps for Android update last month, but we're not sure exactly when Google actually added the functionality.

Also, I think that this means Google is now better tracking Pokémon than Niantic is, at least until they roll out that new tracking function to more users. Which they should do. Niantic. Any time now.

Weekend poll: Has the Note7 recall made you less likely to consider a Samsung smartphone?