If you're a YouTube Red subscriber, it's well worth taking a moment to try out the YouTube Music app. It's still in the process of filling out its feature set, but each update fleshes out areas that really make it a very compelling way to consume music. The latest version bump adds one of the most needed features yet: streaming support for Chromecast Audio. It also brings a partial redesign to the player controls. There is also a subtle change that gives some hope that we may finally see YouTube Music make the jump to Android TV in the near future. 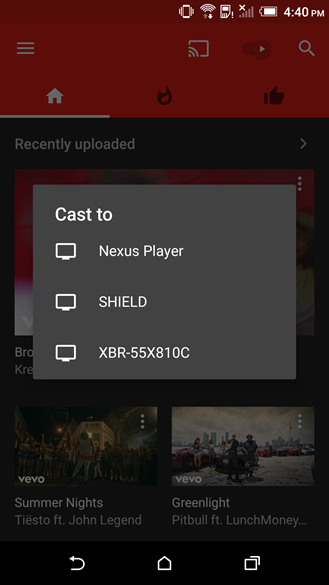 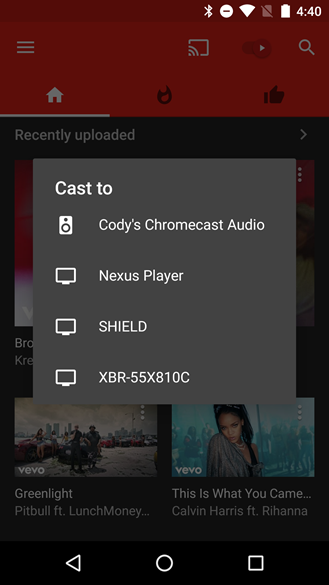 It has been a long time coming, but YouTube Music can finally stream to Chromecast Audio and Google Cast-enabled speakers. Just tap the Cast button to open the list of available devices and items with a speaker should begin appearing in the list.

Powering up your Chromecast Audio might require an extra minute or so while a small firmware update is downloaded and installed. I'm not certain, but it seems this update will also enable the web interface for YouTube to begin audio-only streams. At least I'm pretty sure it wasn't possible about a week ago. Note: the YouTube app still can't do audio-only streams.

If you've been looking forward to using your Chromecast Audio with YouTube Music (and YouTube on the web), this is the perfect time to fire it up and try it out. And if anybody at YouTube is reading this, can I put in a request to get Android Auto support next? 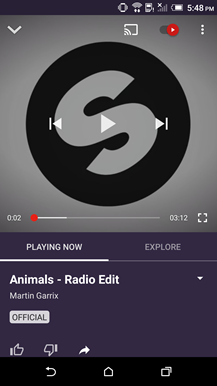 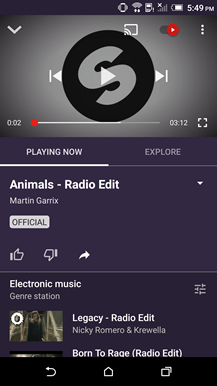 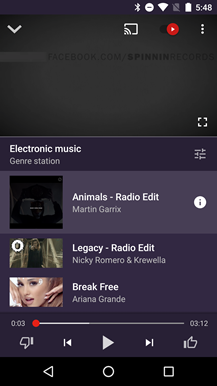 There have been some changes to the design of the player screen and controls. The new layout is a little more faithful to the way most people probably want to watch music videos. To begin with, the player controls are no longer drawn on top of the video player, but instead have been moved down to a persistent bar across the bottom of the screen, much like they are in Play Music. There are still some controls that overlay the video player, but they are generally relevant to changing settings than controlling playback.

Previous versions also opened on a zoomed in and cropped version of the current video, but as the lower panel dragged up, videos would shrink to a more traditional aspect ratio. The new version is locked into the regular aspect ratio from the start. The informational segment is effectively gone, or rather cut down to a much smaller block of space, and the playlist is always visible instead of hidden below the fold as it was in the previous version.

There was very little to see in the teardown of this update, but one minor detail did jump out at me. A change was made to the application manifest, adding the flag supportsPictureInPicture and setting it to false. This flag obviously relates to the Picture-In-Picture feature added with Android N.

So, why do I think this means Android TV support is coming, especially since this flag specifically turns off a feature? Well, to put it simply, it's unlikely that the YouTube Music developers would bother to disable a feature for a platform if they haven't at least tried the app on there. It stands to reason that this means YouTube Music has at least been tested, and until support is actually ready, this particular feature will be disabled. This is obviously just speculation and guesswork, but it's not an unreasonable assumption.

Android TV is no longer a ghost town for apps, but YouTube remains one of the most important content providers for the platform. The YouTube Music app could go a long way in adding another compelling experience for users. It's a natural fit for the TV and may even help to drive Red subscriptions.