After many, many delays with the Turing Phone, it seems like Turing Robotic Industries (TRI) is back, but with far, far more outlandish claims. In a mailing list newsletter, CEO Steve Chao announced a new phone as part of The Outer Blueprint, a program by TRI to integrate artificial intelligence into smartphones. 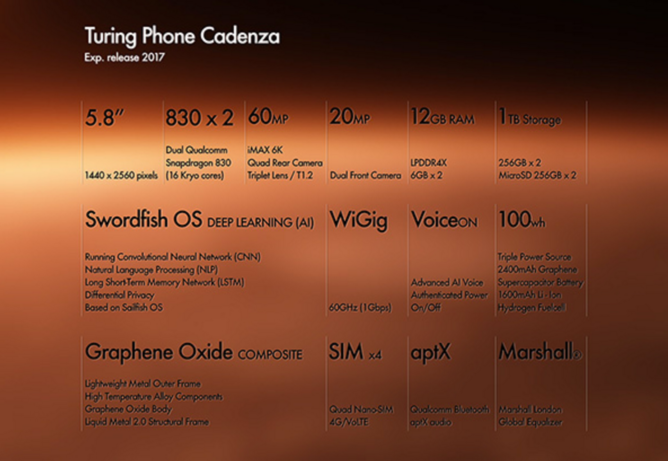 Turing is calling this new "perfectly designed device" the Turing Phone Cadenza, and they're expecting to release it next year. Some purported specs include two Snapdragon 830s (yes, not one, but two processors that haven't even been announced), a 60MP "iMAX 6K Quad Rear Camera, Triplet Lens/T1.2" (???), a 20MP dual front camera, 12GB of DDR4X RAM (just... why?), 512GB of internal storage with two microSD slots, a 100Wh battery with graphene and hydrogen fuel cells (lolwut), and the ability to simultaneously read four nanoSIMs. I have no words.

The Cadenza will apparently use Swordfish OS, an unannounced operating system based on Sailfish that will utilize AI deep learning. There are a whole bunch of other AI terms/buzzwords listed.

We'll admit it—we thought this was a prank or parody when we first received this as part of Turing's mailing list, since none of their social media pages discuss anything like this, but everything points to this being legitimately from Turing. If this was faked, then it was very well-executed.

We look forward to seeing what comes of this. If nothing else, it should be fairly entertaining. Have a look at the full newsletter here.