Samsung announced a major upgrade to their budget SoC offering today, which will go by the name Exynos 7570. It will be the first of its kind—targeted to IoT devices and lower market smartphones—to be built on the power efficient 14nm FinFET process. Also noteworthy is that this new model will have built-in connectivity hardware for WiFi, Bluetooth, and GPS rather than relying on third-party vendors to provide those components for end user devices.

This SoC won't be making an appearance in your Galaxy S8 next year, but is suited to the cheapest cell phones and most appropriately the connected devices that don't need so much processing and video rendering capacity.

As noted by the good folks at AnandTech, this comes as a surprise to market observers because it had long been thought that the manufacturing cost for a 14nm process would be too high to use in mid-range SoCs, let alone budget ones. The benefits of going to 14nm from the 7570's predecessor's 28nm process size are both that more processing power can be packed into the same physical space but also less battery drain. Samsung estimates a 70% performance improvement along with a 30% gain in energy efficiency. 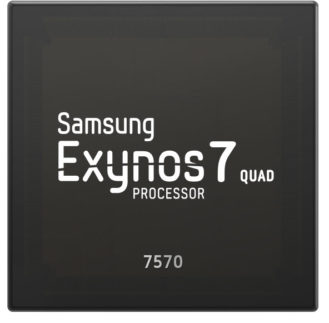 And while previous budget SoCs from Samsung have had integrated modems, they have not had built-in WiFi, Bluetooth, and GPS (GNSS) connectivity like the 7570 does. Having smaller components helps but shifts in the industry also likely explain Samsung including their own implementation.

The 7570 will have four A53 cores, but Samsung hasn't told us the clock speed just yet. Likewise, there's no word on the GPU but the fact that it will not support resolutions higher than 1280x800 indicates that it won't be very powerful.

It's not the sexiest product announcement, but having capable hardware available at low prices is good for everyone.

Samsung Electronics, a world leader in advanced semiconductor technology, today announced that it has begun mass production of Exynos 7 Quad 7570, the company’s newest mobile application processor (AP) built on 14-nanometer (nm) process technology for the budget smartphone market as well as other IoT devices. Being the first mobile AP in its class designed with the advanced process node, Exynos 7570 is also the first Exynos processor to fully integrate a Cat.4 LTE 2CA modem and connectivity solutions including WiFi, Bluetooth, frequency modulation (FM) and global navigation satellite system (GNSS) in one chip.

“With Exynos 7570, more consumers will be able to experience the performance benefits of the advanced 14nm FinFET process in affordable devices,” said Ben K. Hur, Vice President of System LSI Marketing at Samsung Electronics. “By successfully integrating various connectivity solutions, Samsung is strengthening its competitiveness in the single chip market”

Last year, Samsung was the first in the industry to adopt advanced 14nm FinFET technology for its premium processors and has since expanded the adoption to other segments, bringing premium features to more affordable smart devices. As part of such efforts, Exynos 7570 is the first in its class with 14nm FinFET, making it highly power-efficient while enabling outstanding performance.

Exynos 7570, with four Cortex-A53 cores in 14nm, delivers 70 percent improvements in CPU performance and 30 percent improvement in power efficiency when compared to its predecessor built on 28nm. The new Exynos also offers a fully connected mobile experience by integrating a Cat. 4 LTE 2CA modem and various connectivity solutions, such as WiFi, Bluetooth, FM radio and GNSS.

By supporting screen resolution up to WXGA, record and playback of videos in Full HD, and improved ISP (image signal processor) for 8Mp/13Mp front and back cameras, Exynos 7570 presents a wide array of benefits for smartphone users.

Geekbench 4 now available on Android for all your benchmarking needs

Google planning to enter the ride-sharing business with Waze