Maru takes a different approach: while the phone-desktop combos above all rely on more or less a single operating system with different user interfaces for different hardware, Maru mixes standard Android on a phone and Debian Linux on the desktop. Though Maru shares storage, processing power, and connective hardware on the phone between the two operating systems, they're still separate pieces of software. The interesting bit is that unlike some other implementations of this idea, the desktop and phone environments run simultaneously on the docked phone and the monitor. A mouse and keyboard need to be paired over Bluetooth to control the desktop environment. 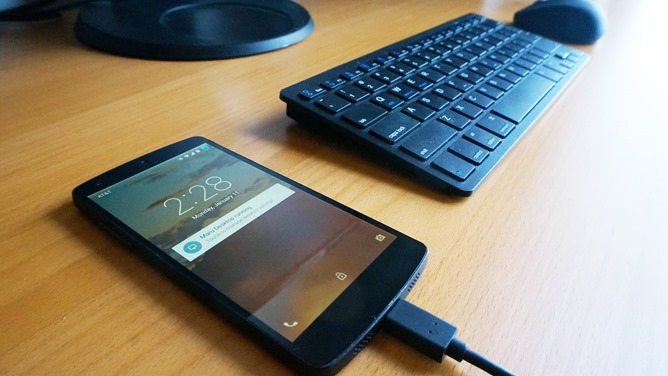 There are a few drawbacks. Though both the Android and Debian components are "pure" without any unnecessary additions, the Android build is Lollipop, now two full releases behind AOSP. Without a hardware dock it's hard to add desktop-class components, like an external hard drive or a hard Ethernet line. But the biggest barrier to users at the moment is that only one Android device is currently supported: the long-in-the-tooth Nexus 5. Hey, you might as well give it a try, since it's not going to get an official build of Android Nougat.

But all these problems can be fixed. Android is open source, Debian is open source, and Maru OS is (wait for it) also open source. Preetam first announced his Maru project back in February, but the code is now up on Github. He's asking for new contributors and hoping to spur excitement with the idea of a community-created alternative to the combination devices listed above, with new devices support being a particular priority. We'll be following their progress with interest.

Moving Chrome apps to desktop apps is now easy, thanks to Electron Chrome