Several years ago we learned that a port of the classic Duke Nukem 3D was coming to Android, courtesy of mobile games developer MachineWorks NorthWest. But that version of the game is no longer in the Play Store.

In January of 2015, news broke of another Duke Nukem Android port. To celebrate the 19th anniversary of the King, developer Voidpoint was faithfully re-creating the insanely fun adventures of Duke Nukem. Apparently the developer had acquired the rights to not only Duke Nukem 3D, but the expansions (Duke It Out in D.C., Duke Caribbean: Life’s a Beach, and Duke: Nuclear Winter), Duke Nukem 64, and the PlayStation’s Duke Nukem: Total Meltdown. All of this together was to be known as Duke Nukem 3D: Hail to the King Collection.

The plan was to piece it together on a new engine, called EDuke32, to keep the authenticity of the originals, but also to push them along into the modern HD gaming era. Some changes were made to accommodate a shift in societal norms, but everything was meant to make Duke Nukem fit into today’s awesome gaming landscape (let’s not talk about Duke Nukem Forever, okay?). 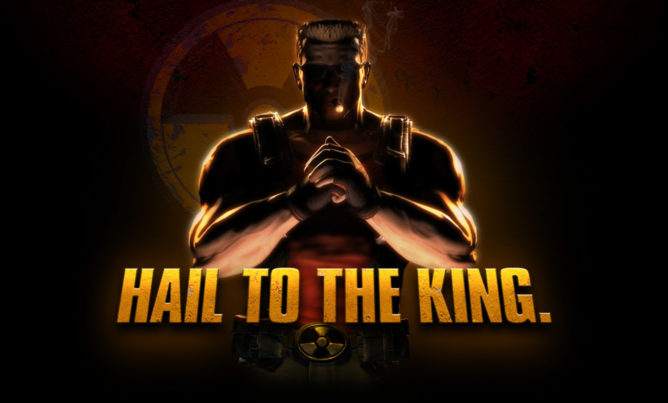 So here we sit on the brink of the fourth quarter of 2016 with no Hail to the King Collection on our favorite Android-powered devices. Recently Android Police reached out to Richard Gobeille, the founder and lead developer of Voidpoint, for an update on the collection. The response we got was not a good one.

In short, the collection has been canceled — rather, the game will not be released in the state that Voidpoint intended. Through a series of licensing issues and clerical errors, the Hail to the King Collection will likely not see a listing in the Play Store.

The longer version of the story starts with the transfer of the Duke Nukem IP to Gearbox Software and 3D Realms, the creators of the original Duke Nukem 3D, to the Danish developer Interceptor Entertainment. When Mr. Gobeille approached 3D Realms for the licensing rights to start work on the Hail to the King Collection, things turned sour. At the time of the contract creation, the representative from 3D Realms had the legal authority to authorize the license for Duke Nukem. However when Mr. Gobeille and he signed the contracts, he no longer had the authority to do so. Clerical errors like this happen quite a bit in the licensing world, but are normally not an issue. In a normal transfer the new owner of the company can validate the representative’s signature and all is usually fine. Remember, though, that 3D Realms was going to Interceptor and the Duke Nukem IP was going to Gearbox.

Therefore, these contracts were rendered voidable. U.S. contract law is complicated at times, but at a very basic level a contract is rendered voidable (note: different than void) if one party is bound to it while the unbound party has the legal ability to choose to oppose it. Gearbox, observing its right, opted to do so.

While it is easy to get angry with Gearbox for impeding the release of the Hail to the King Collection, we need to take a step back and look at this from all perspectives. From Gearbox’s standpoint, publishing the collection would not be profitable for its bottom line. While there are quite a few fans of Duke Nukem, Gearbox does not believe there is a large enough market (i.e. a 20-year-old first-person shooter on Android) to let Voidpoint publish its Duke Nukem re-creation. Also, perhaps Gearbox thinks of Android as phones and tablets, instead of other devices with controllers like the Fire TV and SHIELD TV. Mr. Gobeille is quick to point out that Voidpoint is proud of the touch controls that it has created for the games, but also that these mechanics would work excellently with a controller. Therefore, he believes that Voidpoint and Gearbox think of "Android" in different ways.

Another thing to note is that the relationship between Voidpoint and Gearbox is not as hostile as this whole story might seem. Unfortunately these issues happen, and both parties understand that. The bummer is that Voidpoint was nearly finished with the Hail to the King Collection,with only a bit of polishing left before a final release.

The bright side to this is that Voidpoint may be able to use all of its hard work on a future cooperation with 3D Realms, and perhaps the Hail to the King Collection will be released in some capacity down the line.