Google's restore options upon setting up a new device have been gradually improving over the past few versions of Android, culminating in being able to transfer data from an old Android device in Lollipop, rather than restoring from a Google account. Google's taken another step with Nougat, with the ability to restore from an iOS device.

Selecting the iPhone or iPad option results in the setup process telling users to go to a web address on their iOS device and following the instructions. The URL is www.android.com/switch, which prompts users to transfer over contacts, photos, music, email, and find favorite apps. This is mainly achieved by creating a Google account and uploading data to it from your old iPhone/iPad. In the case of contacts, this is a 5-step long process which involves exporting iCloud contacts into a vCard file and importing them into Gmail. For photos and music, meanwhile, the data needs to be uploaded, through Google Photos or Google Play Music Manager. 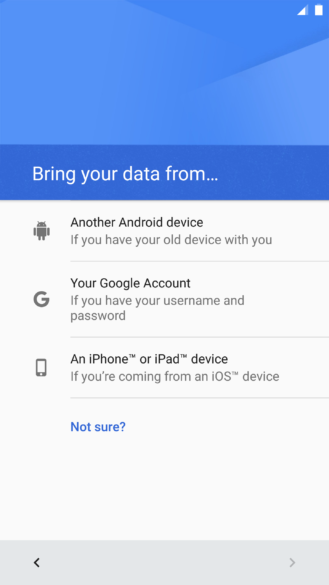 Main image and above: the iOS option in device setup.

It's not clear when the android.com/switch website went live, but the iOS option in Android's device setup is a welcome addition, making it even easier to move to Android from other mobile operating systems. However, it would be even better if this was automated through an iOS app, much like Apple's app is on Android.

Duke Nukem 3D: Hail to the King Collection for Android has been canceled