What's better than unlimited data? You guessed it: unlimited data you can use to stream videos, music, and games at the same speed you can stream anything else. Well, Sprint has decided to offer us lucky consumers the opportunity to use unlimited data for the things that motivate most of us to consider these plans in the first place. Of course, you have to pay $20 more per month, per line for that right.

Just a week ago, Sprint looked at T-Mobile's controversial unlimited data plan and released their own, cheaper one. Just like the T-Mobile equivalent, Sprint's so-called Unlimited Freedom plan puts no hard cap on data usage but throttles media streams to a bitrate that would effectively cap the video quality at 480p and music 500 Kbps.

Unlike T-Mobile's, though, Sprint's Unlimited Freedom does allow 5GB of tethering data—not quite unlimited, but better than nothing.

To appease the people that want to stream videos above 480p or stream games above 2 Mbps, Sprint is now offering an upgraded version of the plan—called Unlimited Freedom Premium—for an extra $20 per month, per line. Note that while the original plan reduces the per line rate for adding a line to your plan, the premium surcharge is the same amount for each line. 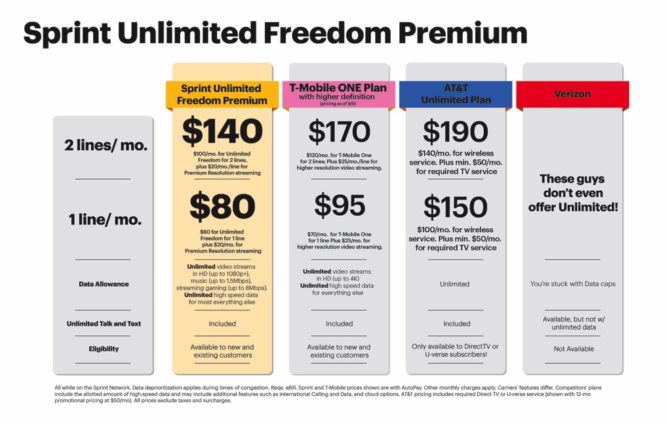 Sprint's comparison of unlimited data plans makes theirs look good, for some fair reasons. Do note that T-Mobile's HD plan is less restrictive, only capping videos and doing that at 4K quality. Sprint isn't making promises above 1080p, which is probably fine for most, but still applies a cap to music (1.5 Mbps) and streaming games (8 Mbps).

Note that the AT&T plans are not an apples to apples comparison; the pricing includes a DirecTV subscription of $50. I don't think Sprint or T-Mobile are offering home broadband or cable TV in their mobile plans—if you have or want to have either DirecTV or U-Verse, AT&T matches Sprint's pricing for two lines if you consider only the mobile component. AT&T has no selective throttling restrictions.

It's worth noting as well that while the FCC has been mum on these and other similar plans, it is hard to justify them under the principles of net neutrality. Quite simply, for the carriers to have a claim to being neutral, they can't treat any type of data differently as these plans do.

The argument Sprint and others will likely use if prodded by regulators is that these throttling policies are part of acceptable network management practices. A more net neutral way to sell mobile broadband would be to sell the plans on speed tiers. For now, you just have to pay more if you want video, music, and games to be treated more like the rest of your data.

Opera reports server breach, fears saved passwords and other user data may have been compromised