Out of the entire list of apps in Google's lineup, Maps is probably the most consistent about delivering new and interesting features with almost every release. Version 9.35 began rolling out to users signed up to the beta channel yesterday and it's no slouch. Regular drivers can look forward to a new screen to welcome them when they arrive at their destinations, and dropped pins now contain Plus Codes so it's extremely easy to convey fairly precise locations to people through text, IM, and even over the phone. Moving over to a teardown shows that speed limits and current speed are going to be shown during navigation. There are hints that Maps is going to enable us to order food, hunt Pokemon, and answer questions about questions. 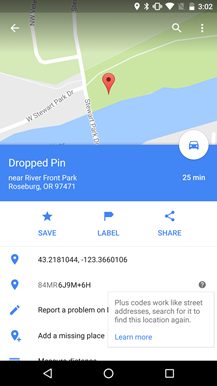 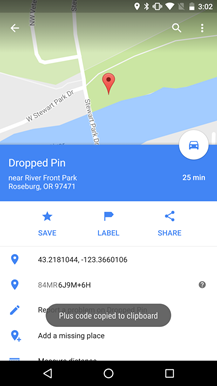 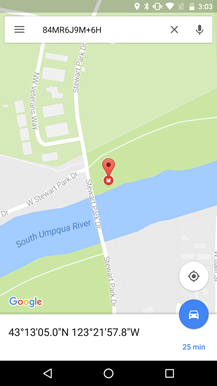 Coordinates suck as a means of communicating a location. They have to be kept as an ordered pair, they're pretty long, and there's no good way to shorten them without losing resolution. Two years ago Google's Zurich office developed an alternate method dubbed Open Location Code (OLC). It solves all of these issues and quite a few more.

Last year, OLC support was added to Google Maps (web and native apps) and nicknamed Plus Codes, but it was only useful when you already had a code to look up. If you need to get a code for a location, the suggested method required opening a browser and visiting a fairly obscure site called plus.codes to get it. If this sounds confusing or easy to forget, don't worry because Google Maps on Android can now calculate these codes for you.

To get a location code, just long-press to drop a pin in the map view. Once it's there, tap or drag up the info panel at the bottom and look for an 8+2 formatted code like 849VCWC8+P9, usually just below the coordinates. Sometimes the code won't show up if the map is zoomed out too far. Tapping on the line immediately copies the code to your clipboard for quick pasting into an instant message or SMS. Unfortunately, it seems the web interface still doesn't provide codes yet, but that's probably coming very soon. (Right, Google?)

Note: The first four characters of the code are slightly gray, which is meant to serve as a reminder they can often be left out if the recipient will already know the general region (within a roughly 100 x 100 kilometer square). For example, if you're already looking in Mountain View, California, the code above can be shortened to CWC8+P9, which is so short it can be read to somebody over the phone.

This feature might seem like a small thing, but it really makes Plus Codes very usable by regular people. It was already easy to look up the location they pointed to, and now it's super simple to get them. So to put this another way, please teach this to your friends and parents in preparation for the next time you're going to meet them at a park, music festival, or any other open space. This is one of those things we should embrace because it actually is that good, and it will become more useful as more people learn about it. 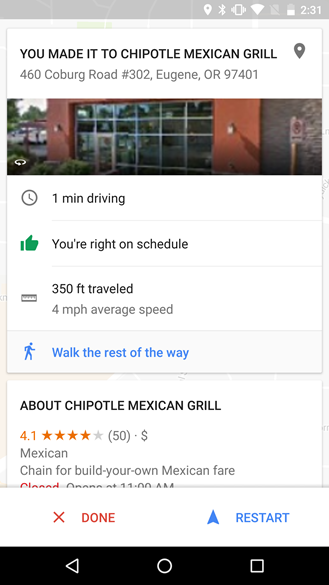 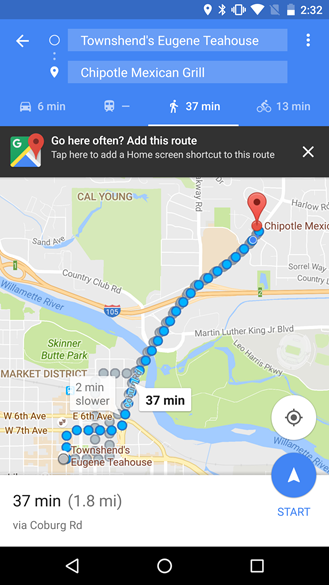 The other clear addition comes as a new behavior in Navigation mode. The update to v9.35 now shows a "You made it to ..." screen upon arrival at each destination. It contains your total drive time, if you're late or on schedule based on estimated drive time, how far you've traveled, and your average speed.

A "walk the rest of the way" button is at the bottom of the card. Tapping on it will launch the navigation setup screen with walking auto-selected as the means of conveyance. This is useful if you're driving to a parking garage and then going to your final destination on foot. If you're headed to a landmark or business recognized by Google Maps, another card will show up in the list with the standard details. Finally, there are buttons to clear this screen or restart navigation to the same destination, just in case you drove by it and have to find your way back.

Google Maps is a pretty great app and service, but that's not always clear from the comments that come out each time there's an update. This is because there are always passionate users hoping to see features that would be of value to them. For a long time, the most common request was for full offline navigation and search capabilities, which arrived last year. Now it looks like another one of the common requests is about to be delivered: speed limits and live speed reporting.

There's not much to explain about this feature that isn't completely obvious. There's going to be a number showing the speed limit in a given area and another number to show your current speed. Right now, there's nothing in here to suggest Google Maps will warn you if you're exceeding the posted speed limit.

The speed limit feature will be enabled by default when it goes live, but there's going to be a checkbox to disable it in the Navigation Settings screen.

It's pretty obvious from the strings that both miles and kilometers are supported. Strangely, one of the labels is specifically named for North America, which begs the question if there's a terminology distinction or if there's going to be some special behavior.

Edit: There was a screenshot previously in this position that contained what was believed to be a glitched speed limit sign. It turns out there was a misunderstanding and there is no such glitch that produces a speed limit sign on the arrival screen. We apologize for the mistake. The information above remains accurate – a speed limit feature is still definitely in the works.

It's not clear if the speed limit feature will go live with a server-side switch or if it will require another update, but it certainly looks like it's getting close.

A word from the writer: Yes, we know you want a persistent option to ignore toll roads. I didn't say all your prayers had been answered...

I'm not quite sure what to say about this one, but there are a couple of strings that suggest Google Maps will soon allow you to place an order for food from within the app. It's not really that surprising given how many people actually rely on Maps to find and select restaurants.

There's not actually much more to go on right now, so it's hard to guess at the context for these strings, when they will appear, and how much will be possible. It goes without saying that many people would find it convenient to find a restaurant nearby, build and place an order, then drive over and pick it up, all using the same app.

Have you been asked if a restaurant serves beer in a country where alcohol is illegal? If a drive-thru restaurant offers good seating? If an adults-only <cough> establishment is family friendly? These questions don't make any sense, but they actually do come up from time to time. Google doesn't want to waste time with pointless questions, so you'll soon have the option to report them.

If a question doesn't belong, you'll be able to flag it as irrelevant for a place or country, redundant or confusing, strange or unclear, or give some other explanation for why it's not really working for you.

Every once in a while there are images worth calling out, but they don't actually come with anything else to point out or explain potentially linked features. There's no point to writing a lot, but a few rapid-fire comments are warranted.

We all know the Local Guides program invites users to try out a few things before they are rolled out to the general public. It looks like Google is going to start marking some of these things with a beta badge with the Local Guides logo.

There's no clear use of this one yet, but now there's a Pokeball icon floating around. If you're a dedicated trainer, it might be time to keep an eye on the Maps app now, too.

And finally, we get to a cute new welcome screen for Navigation mode. 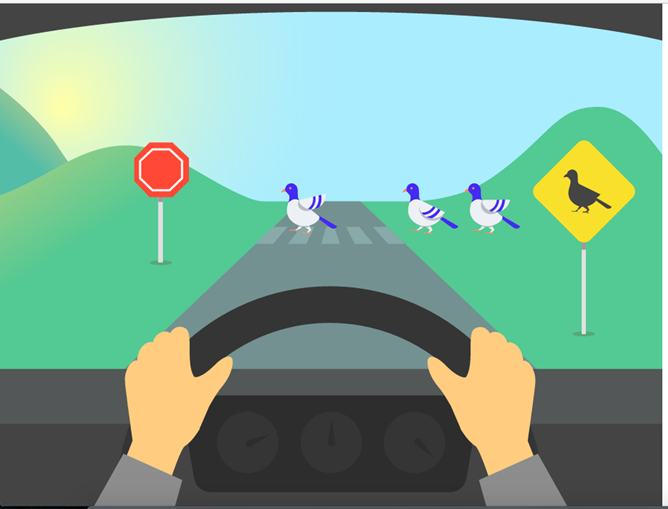