Multiple mobile analytics firms have weighed in on the state of Pokémon Go, and the news could be better. Usage is down from its peak in mid-July, which you'd expect for any product that explodes like Pokémon Go. However, the trend continues to be downward for Niantic as daily active users, downloads, and time spent in the app continue to decline.

Pokémon Go was instantly the biggest mobile gaming phenomenon ever when it was released in early July. Our initial Pokémon Go post and APK download basically broke Android Police because of all the traffic it pulled in. You could go anyplace in the real world and see clusters of people playing the game. More recently, the excitement has died down. Now, I don't see nearly as many Pokémon Go players when I'm out. According to Apptopia's data, Pokémon Go use topped out at around 45 million daily active players. Now, it's around 30 million and still falling. 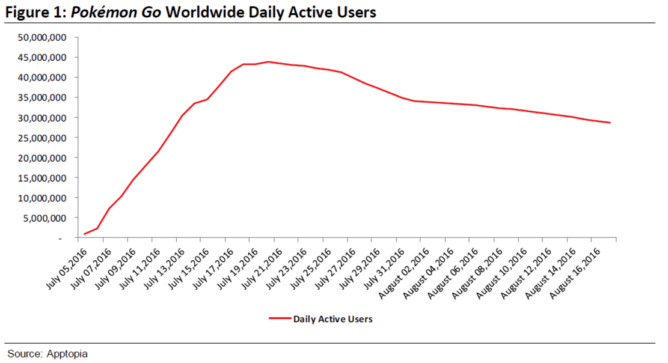 Niantic's slowness to address bugs in the app, as well as the removal of Pokémon tracking probably caused many casual players to hang up their Poké Balls. There's also not a whole lot to do in the game if you don't live in a densely populated area. Rural and suburban players have probably caught all the Pidgeys and Rattatas they could ever want. It's not like Pokémon Go is done for with "only" tens of millions of active players, but it's probably never going to be the strangely social gaming experience it was during those first few weeks.

Project Fi's WiFi Assistant is coming to all Nexus devices in the US, Canada, the UK, and more