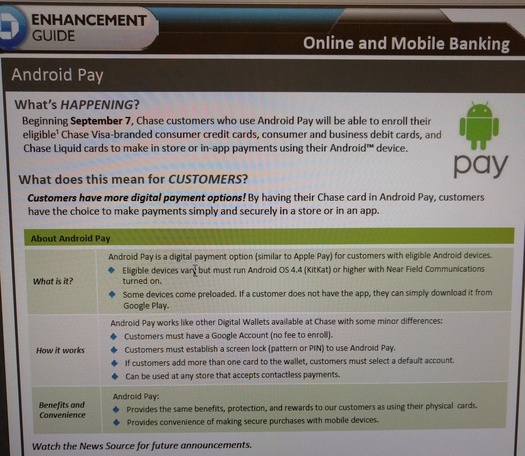 This leaked internal document is pretty straightforward; Android Pay will begin support for Chase cards on September 7th. This includes Chase consumer credit cards that are Visa-branded, both business and consumer debit cards, and Chase Liquid cards. Only the first sentence of the doc is relevant to us, as the rest of it is just a recap of what we already know. But what a magnificent sentence it is.

(Edit: This article previously called Chase Pay a "disaster." Chase Pay can't be considered a disaster because it hasn't fully rolled out yet. We regret the error.)

This news will no doubt come as a relief to all of you Chase users. No longer will you have to comment "Chase... you greedy bastards" or "Android Police should just put [NOT CHASE] on the title of these articles", because support is on its way to hush you all.

The first Android N maintenance release will probably be Android 7.1