The latest app to join the rather exclusive 1 billion club on Google Play is... drumroll please... Instagram. This is quite surprising when estimates only put the number of accounts at 500 million, but I guess the downloads counter doesn't differentiate between unique installs or not. Either way, it scares me that Facebook owns the two biggest social networks in the world.

After the Facebook app, then WhatsApp, then Messenger, Instagram is the fourth of Facebook's apps to get 1 billion installs. Again, scary. Getting 1 billion installs is no easy feat - especially since at the last count Android only had 1.4 billion users. Okay, so the metric isn't completely fair since those users are unique whereas Instagram's 1 billion installs are not (or any other 1 billion installs on the Play Store, for that matter). Joining the club in any circumstance is pretty cool, though. 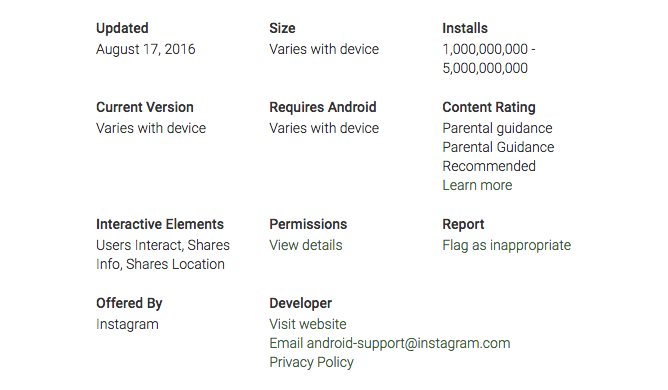 In getting to 1 billion installs, Instagram becomes the 19th app to achieve this. What app will be next, the 20th member of the gradually-getting-less-exclusive club? Twitter? Pinterest? Hmm. My bet is on Snapchat.

[Revolutionary] Google Allo will let you search all of your conversations... inside the app