T-Mobile made a big change to its plans yesterday by getting rid of all of them except for T-Mobile One, which offers unlimited data. There are a number of big drawbacks to that plan, but Sprint likes the sound of those drawbacks, so it has followed suit with a plan called Unlimited Freedom. It's a lot like One, but a few bucks cheaper with a slightly different set of restrictions.

Unlimited Freedom includes unlimited calls, SMS, and LTE data. However, it throttles certain types of data like T-Mobile. At each tier, Sprint has trimmed a few dollars compared to T-Mobile. For a single line on Unlimited Freedom, you're looking at $60. The next line is $50 and each one after that up to ten is $30. This plan does include 5GB of hotspot data, for which T-Mobile wants $15. Sprint says it's the best value now (see below, but ignore the incorrectly named Tmo plan—that's One, not Simple Choice). 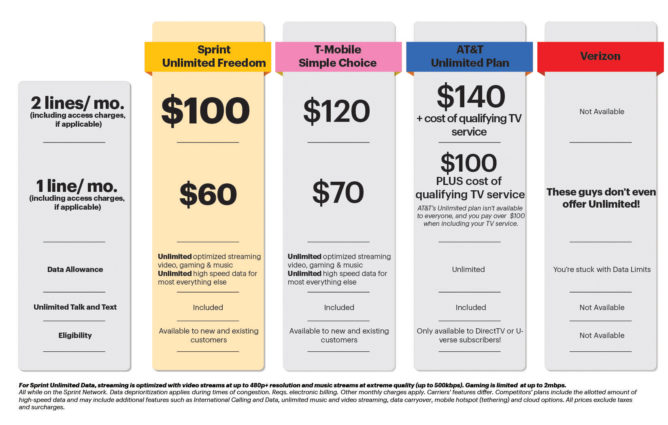 As for the throttling, Sprint says you'll get 500Kbps for music, 2Mbps for gaming, and 480p video (doesn't specify a bitrate there). It seems like the video "optimization" will be handled with straight up throttling. T-Mobile tries to get Binge On partners to limit video streams to 480p on their end. This is only one of Sprint's plan options, so you can still get something else if you want un-throttled data. . There is a premium video add-on buried in the FAQ, but there's no price listed. It's also "free" through October. So, the throttling doesn't start until then.

Sprint's Unlimited Freedom plan is available today, and there's a version of it on Boost Mobile as well.

Unlike Hangouts, Allo lets you delete messages from your chat history