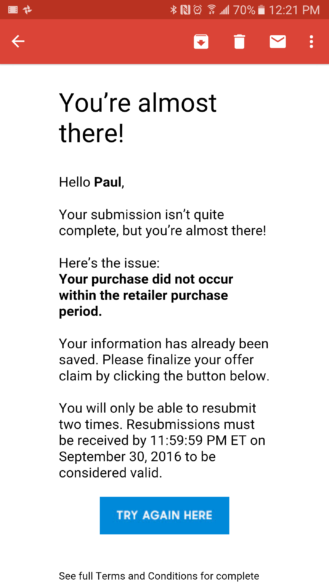 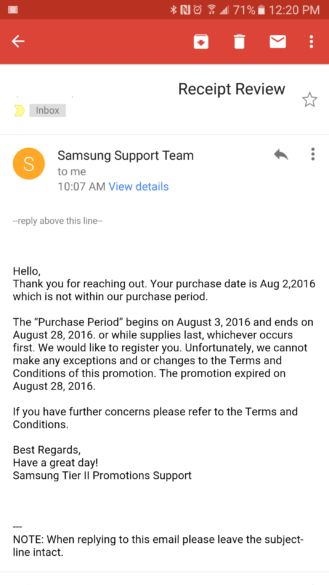 The reason for this issue seems to be that T-Mobile began accepting Note7 pre-orders on August 3rd at midnight EST, but since T-Mobile is based in Washington, a state on the west coast, they use Pacific time for their ordering system. So if you pre-ordered a T-Mobile Note7 on August 3rd at 1am EST, the system recognized the order as being placed on August 2nd at 10pm.

Samsung's gift redemption website is only accepting applications if it sees that your pre-order was placed between August 3rd and August 28th, so it's programmed to automatically reject orders placed outside of those dates. Because of the time zone issue, Samsung's system is also seeing extremely early T-Mobile orders as being placed outside of the date range.

As a result, many early Note7 pre-orderers on T-Mobile are having issues claiming their gifts. The affected customers have contacted Samsung and T-Mobile customer service, but obviously neither were really able to help.

But now, we've received a statement from Samsung indicating they're not only aware of the problem, but that they'll be reaching out to affected customers soon to correct it. Here's the word from Samsung:

There was a minor error in our redemption system. This has been fixed and everyone who purchased their device within the promotion period will receive their device. Our fulfillment agency should be reaching out to affected customers over the next few days to confirm with them.

So, all should be well soon enough, eager T-Mobile Note7 pre-orderers.

Researchers have developed lithium batteries with twice the capacity of current ones and expect ...

Google is phasing out Chrome apps except on Chrome OS, will no longer work by 2018