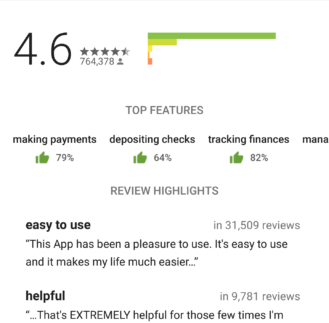 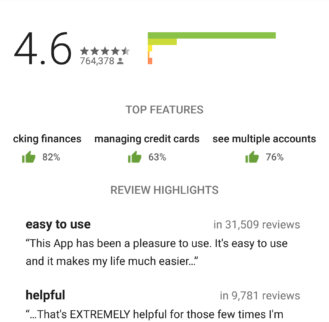 Top Features is situated above Review Highlights and contains user feedback about certain abilities of the reviewed app. It has a horizontally scrollable bar that can contain varying amounts of features; for instance, Chase Mobile has five features, while Spotify Music has eleven. Currently, Top Features is only available on popular apps such as the aforementioned Chase Mobile and Spotify Music, Gmail, Facebook, etc. We aren't sure what precisely designates an app to be eligible for Top Features, although popularity and the number of reviews are probably factors.

The new process asks reviewers three questions about the app. Basically, Google will ask if x function is available in the app; if it is, you give a thumbs up; if it isn't, you give a thumbs down; and if you're unsure, you click "Not Sure". The process itself is pretty straightforward, but it is unclear how exactly Google comes up with these questions; all we know is that they eventually contribute to Top Features. This seems like it could have been inspired by Google Maps' crowdsourcing of information about places. 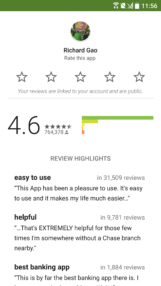 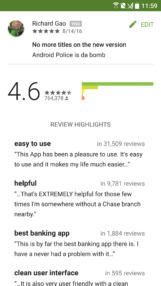 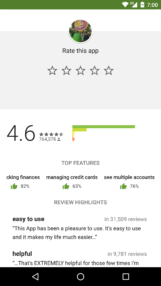 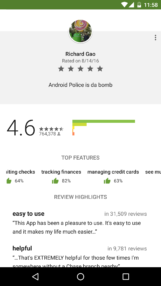 Other changes include various tweaks to the design of the reviewing process. The whole thing looks a lot cleaner and more Material Design-inspired. In addition, reviews can no longer have titles. Considering I'm too lazy to write titles for my reviews, this is a welcome change for me; however, if you always put a lot of effort into creating witty ones, you may be disappointed.

Overall, the changes Google is testing are welcome. Top Features will better assist Android users by prominently displaying what functions an app contains, and the new review process is easier on the eyes. The adjustments are currently only available to a select few on the Play Store app.

Allo and Duo's new app icons are much nicer, more consistent with other Google products

Exclusive: Photos of the 2016 Nexus "Sailfish" in the [metallic] flesh