Evan Blass (@evleaks), who was supposed to have retired a little over two years ago, is still one of the best in the leaking game. His latest reveals, the HTC Desire 10 Lifestyle and Desire 10 Pro, are a bit strange in that while the Pro model is pictured, it's the Lifestyle model that is detailed thoroughly. Blass says that his source is someone who was briefed on HTC's plans, so the information should be fairly reliable.

VentureBeat (where Evan is a writer) is reporting that the Desire 10 Lifestyle will feature a 5.5-inch 720p display, an unknown Qualcomm Snapdragon SoC, and Android 6.0 Marshmallow with HTC Sense. The main camera is a 13MP BSI sensor with a single LED flash, while the front-facing one is a 5MP sensor that is also BSI-equipped. Both cameras are capable of 1080p video. The Desire 10 Lifestyle will also feature "Boomsound Hi-Fi Edition" stereo speakers with 24-bit audio pumping through both the speakers and headphone jack.

The Desire 10 Lifestyle will be available in configurations of 3GB RAM/32GB storage and 2GB RAM/16GB storage. It will come in several colors, all of which will be blinged-out with lots of gold trim. A pair of high quality earphones will come in the box. 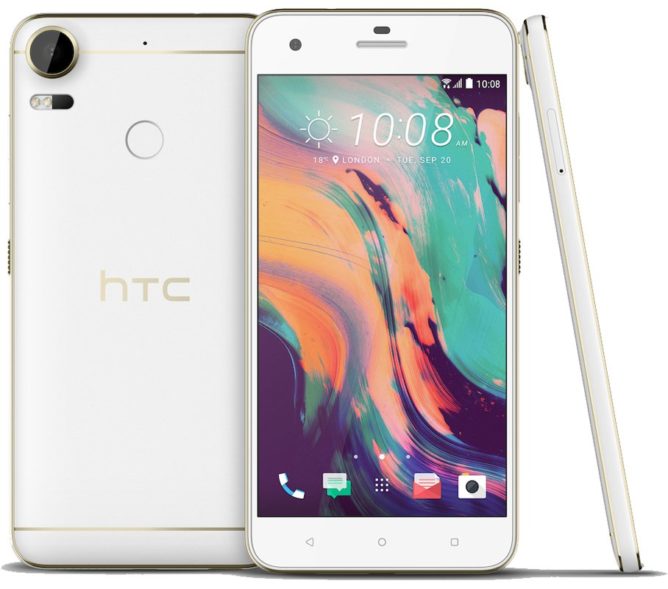 Moving on to the Desire 10 Pro, this more upmarket device will likely incorporate similar design elements to its Lifestyle brother, if not reuse the entire shell. From pictures of the Pro model, we can see that the gold trim first mentioned for the Lifestyle is prevalent here, as is a single-LED equipped camera. There appear to be chamfers on both the front and rear, although nowhere near as severe as the flagship 10's rear chamfer. The camera protrudes a decent bit here. There is a circular fingerprint sensor on the back and capacitive keys up front. We can also peep a ridged power button (always a nice touch) with volume buttons above it and what appears to be laser autofocus next to the flash.

If we dig even deeper, we can see that the date on the clock widget is September 20th. This not only corroborates VentureBeat's suspicion that the Desire 10 Lifestyle will launch in late September, but also a tweet of @evleaks's saying that the Desire 10 will arrive at the end of Q3. HTC has been known to leave little hints of expected launch days in renders, so we're not just grasping at straws here.

Unfortunately, we don't have any information regarding how much both phones will cost.

This new $1 app lets you use Cardboard apps on the Samsung Gear VR, no root required