While the dream of all top-tier smartphones supporting wireless charging seems to be fading, there are still a fair number on the market equipped with the feature. It's a sweet way to juice up your phone without the hassle of dealing with wires and plugs.

Tronsmart has just released a new wireless charger called the Chocolate and passed along some coupon codes to share with you. The only truly notable feature about the charger is that it supports the new, faster generation of wireless charging with speeds up to 10W (1.4 times faster than the older generation).

Samsung's latest handsets, including the Galaxy Note7, Note5, Galaxy S6 edge+, Galaxy S7, and Galaxy S7 edge, are all compatible with this technology and will charge significantly faster on this wireless charger than those with older technology. If you are using an older phone that doesn't support fast wireless charging, never fear, the Chocolate will work just fine with any other Qi equipped devices, it will just be a bit slower.

I haven't used this device myself, but the initial 5 reviews are all positive (though they all are of the 'I got this in exchange for a review' variety). I have, however, tested other Tronsmart chargers and have not encountered any issues with its products. Considering this charger costs less than half of what Samsung is asking for its fast charger, and comes from a reputable company, this looks like a pretty solid deal. 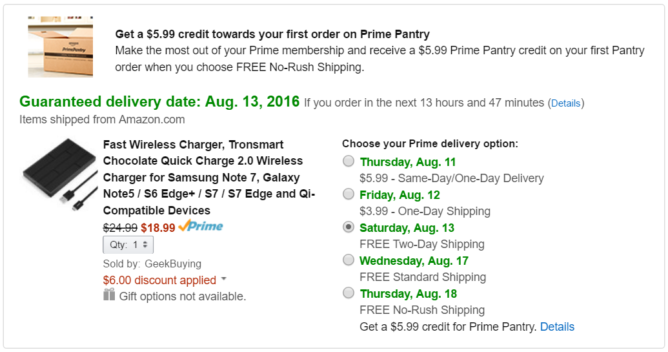 Ok, now for the part you've been waiting for; here are the codes. Charge your cards so you can charge your phones folks. Let me know if you encounter any issues in the comments below.