So, it appears that Pokémon GO will now pop up a warning when you're moving at a certain speed, indicating that you're in a car. The game will still work, but you have to confirm that you are not the driver. The one notable big fix (other than that iOS one included in the changelog for some reason) is the bonus for nice, great, and excellent Poké Ball throws. If you chose your name poorly, you can change that now too (but only once). 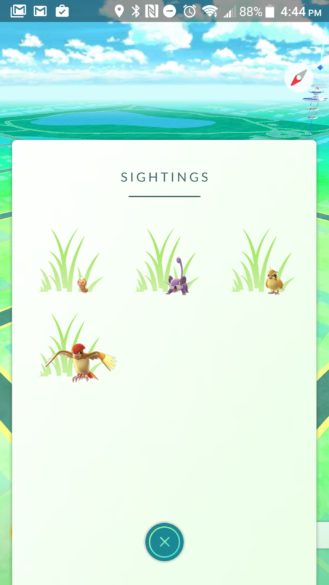 This isn't in the changelog, but the nearby panel is called "Sightings" now and there's grass next to each Pokémon (see above). There's no hint of a new tracking feature yet. You can get the update from the Play Store, or grab it from APK Mirror right now.

Niantic's changelog on the official site lists an interesting item that wasn't in the Play Store:

"We’re currently testing a variation of the “Nearby Pokémon” feature with a subset of users. During this period you may see some variation in the nearby Pokémon UI."

We're not sure what that variation is, and if it actually lets you track Pokémon. It might just be a visual tweak. We've got the fuller full changelog above. Let us know if you spot any changes to Nearby.

SwiftKey v6.3.9.79 update rolling out with fix for busted sync

Play Store app's "People" area, +1s on app pages may be getting phased out