If you're a regular user of the dedicated YouTube Music app, you're probably accustomed to updates that add fairly non-obvious changes. The latest update includes a hidden gem that makes the offline mixtape feature considerably more useful. According to an official changelog posted late last night, we should also see screen rotation, but it seems that didn't actually make it into this release. As usual, there's a download link at the bottom so you can skip Google's staged rollout. 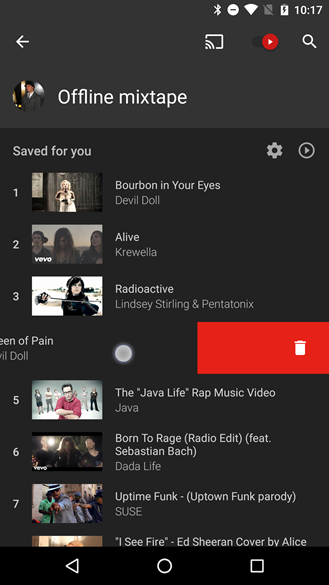 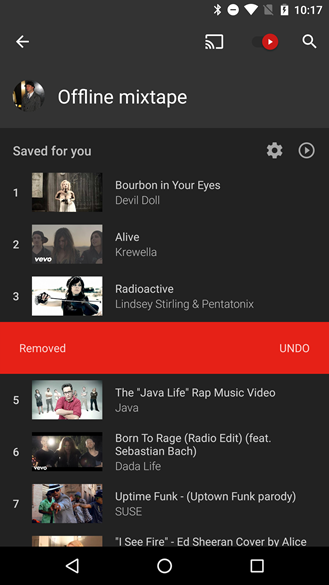 The Offline Mixtape is a neat way to quickly load up a few tracks for listening when you're going to head into places where data is non-existent or costly. However, it suffered from one notable problem: there was no way to fix bad picks. That's not going to be a problem anymore because users can now swipe away unwanted tracks to remove them from the playlist.

Swipes have to go from right-to-left and there aren't any visual signs that this gesture exists, so discoverability might be a problem After removing a track, its space in the list remains for a couple of seconds with a button to undo the action. A few minutes after removing a song, YouTube Music will fill in the set with enough songs to get back to the original count. In my experience, it usually took about 3 minutes before new tracks were downloaded. Your current total will be shown at the top of the list (pictured below).

There are still a few more improvements I would expect to see in the offline mixtape, particularly the ability to re-order the list, but many of these things will surely come around in future updates.

Update: Evidently, this feature is tied to a staged rollout, so even with the latest update, you may not see it working right away. – Thanks, yochanan.

If you've been following along with YouTube's other purpose-specific app, Gaming, you may have noticed that support for landscape orientation was added just last week. An official changelog on the Play Store claims the same feature was added to YouTube Music with this update. As it turns out, this is an error.

To be specific, the changelog is referring to the main screen that shows up when the app is opened, and possibly some of the secondary screens like offline mixtape. There are already a couple of screens that have always supported rotation, including the music player and settings.

It's likely there was a mix-up with the builds and a small change was left out. We'll probably see another update roll out in the next few days with rotation support.

New Android Wear app update announces shutdown of Together by September 30... because Wear 2.0