The Nexus 6 isn't exactly a smash hit of a device - between a niche target audience, an unusually large form factor, and a high initial retail price, it hasn't gotten the same warm reception as some other designs in the line. But there are still plenty of Android faithful using "Shamu," and more than a few of them using it on T-Mobile... including multiple Android Police writers. Since the beginning of August, a considerable number of those N6 users on T-Mobile have been experiencing serious connection issues.

Multiple readers have told us that the data connection on their Nexus 6 phones is inexplicably cutting out, only on T-Mobile. Over on Down Detector, the recent page for T-Mobile network status is filling up with complaints of data access failure, again, almost exclusively from Nexus 6 users. There doesn't seem to be a pattern in the time or location, as reports are coming in from all over the country. A T-Mobile user affected by the problems told us that the customer service department could restore data with a manual over-the-air update via Wi-Fi, but that the problems returned in a day or two. 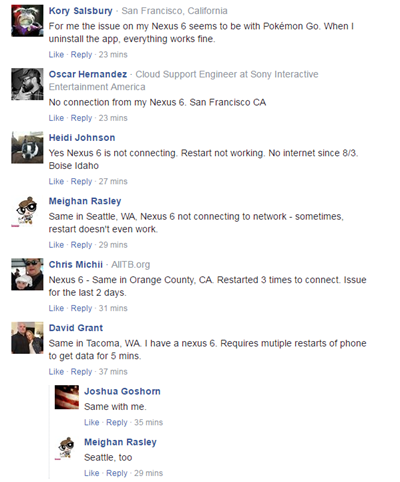 Secondhand reports from T-Mobile say that they're aware of the problem, that it isn't limited to just their network, and that they're working with Google on a more permanent solution. That may have to wait "until Monday," which would leave a small but vocal group of users in a serious bind over the weekend. A logical thought might be that the issue comes from the latest security update to Android, which was posted on Sunday (the first of the month). If that's the case, manually flashing back to the previous month's update might be a temporary solution.

The problem isn't affecting all Nexus 6 owners on T-Mobile - my "daily driver" is a Nexus 6 with a T-Mobile SIM, and it's working fine. Here's hoping that T-Mobile can find and resolve whatever is causing the problems; we'll update this story with news as it becomes available.

It looks like quite a few of our readers are experiencing this issue. Based on the fact that many commenters are seeing data outages on older Android builds or custom ROMs, the August security update seems to be a less likely culprit than we initially thought. Google is aware of the issue, according to this thread on the Product Forums, and they're working on a solution.