And the hype train is on. LG already teased the V20 a couple of days ago, saying it will be released before the end of the quarter — September being a good approximation — and it will be the first Android phone to ship with Nougat. That means that it'll most likely be available before the new Nexus phones but after the official release of Nougat. 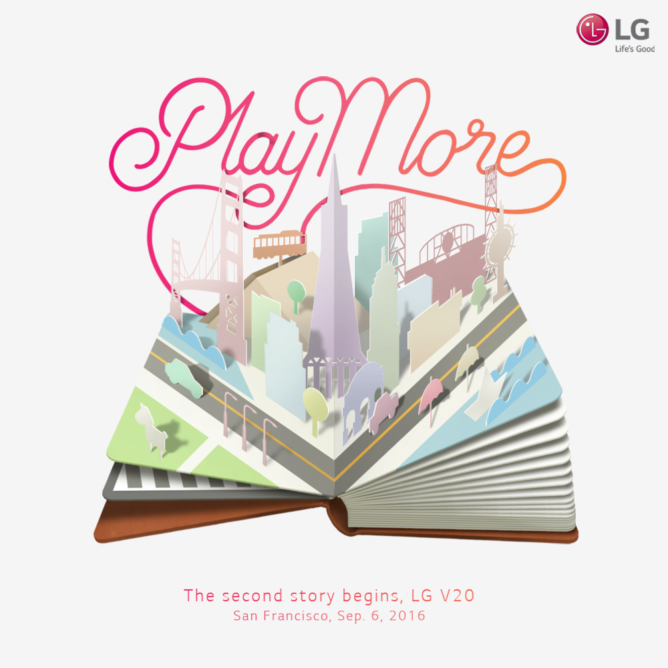 Now LG is letting one more piece of the puzzle out. The V20 will be announced in an event in San Francisco on September 6, which is about a month away from now. That's quite the wait but let's hope it's worth it. The invite emphasizes the Play theme again, as with the G5, so there's a chance of seeing the Friends resurface. That's something we're not overly excited by here at Android Police. As a matter of fact, the only G5 Friend we liked was the 360 Cam, and part of it was because it wasn't physically or in software tied to the G5.

We don't know anything about the V20 yet. It hasn't been leaked to high heaven like the Note7 was, so there are still many question marks regarding it. With the phone being in development for a couple of years at least, there's a high likelihood that LG didn't have enough time to scrap off its original plans after seeing the cold reception to the G5 and its Friends, but there might be a chance that a few things were improved or scrapped off. I'm just hoping that LG's software customizations are more toned down and that the phone's finish is at least better done than the G5. We'll see. It's a month from now, but I'm sure the leaks will start coming soon.