The Google Maps app is back again with a fresh update, and this one is certainly interesting. As far as live features go, there are some changes related to navigation that will help keep maps oriented north, even with accidental swipes. A teardown also shows that Google is planning to give advice about parking at different locations, and Local Guides can look forward to status indicators for edits. And finally, there's evidence suggesting the return of Launcher Shortcuts. 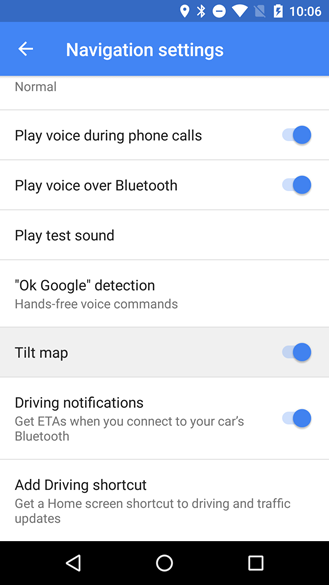 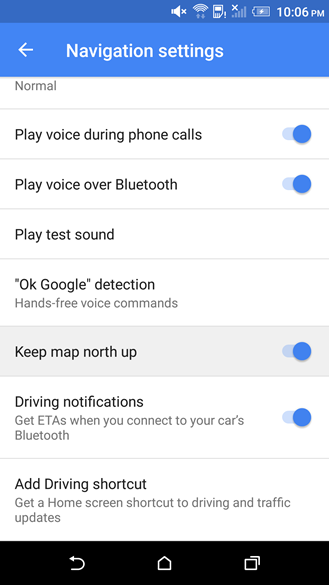 The Navigation settings screen may contain the only immediately visible change in this release. The Tilt map toggle that has been around for nearly two years has been replaced by a new setting called "Keep map north up." Despite its unfortunate and somewhat confusing name, it seems to serve a very simple function: to force Navigation mode to launch with the compass locked so that North is pointing up. If left disabled, map rotation will be in free rotation mode. This setting is particularly relevant to the next, and extremely related feature.

If you're fumbling with Google Maps while you're driving – something we all know you shouldn't be doing – it can be easy to brush the screen the wrong way and end up with a fairly useless view that contains neither you or your route. About this time, the re-center button pops up to save the day. The developers at Google knew this was an issue and quietly added accidental swipe protection. It only triggers on really fast swipes, and viewport will either go back to your current location or the position of an upcoming turn, depending on which direction you swipe. You didn't even know that was there, did you?

Now there's a new trick that makes the accidental swipe protection even more resilient. The animation above shows accidental rotation is now also protected. As long as the map compass is in north-is-up mode, fast 2-finger gestures that cause rotation of the map will automatically adjust back to the normal orientation. This will help with those moments when you fumble while trying to zoom out to see an upcoming turn following an intersection.

As with any update to one of Google's apps, there may be more features we've yet to see, so keep an eye out for more.

When you're driving to an unfamiliar place, you may get there and discover that the hunt for parking goes on longer than a song at a Phish concert. It happens all the time, whether you've gone across the country or just to the other side of town. But without some experience or advice from somebody you know, it's difficult to predict the situation. Google is planning to help out with that. Some new text indicates that Maps will soon give hints about the scarcity of available parking.

The categories are broken up into three obvious groups: easy, medium, and hard. There's no indication of where the data comes from and nothing to indicate that variables like time of day or specific events will play into the equation. This may simply be a measure of how much parking there is in an area, not the likelihood of availability. Whatever the case, this knowledge may prove invaluable when trying to decide if it's better to park elsewhere and hop on a bus or train for the last leg of the trip.

I've tried checking out about a dozen different places and none of them have shown this indicator, so I suspect it's not live yet. However, it's possible Google will roll this out to people over time or may be waiting to turn it on at a future date.

Active members of the Local Guides program like to know when their changes become part of Google's collected knowledge of the world. Sometimes it helps to just peek in and check how things are moving along, and it looks like Google is going to take some of the guesswork out of that. New status indicators appear in this version to let contributors know if their changes are still pending, accepted, or rejected.

New APIs and features are expected to appear with every new version of Android, but every once in a while those features creep out into the world before they are officially announced or shown off. Google Maps is now built to target API Level 25, just like the Play Store update from a couple days ago, so it's not too hard to believe some previously undocumented capabilities are already turning up.

A new definition file with an unfamiliar syntax has been added to Google Maps. It requires a simple line in the Android manifest pointing to the appropriate XML file, which contains a simple definition for fairly standard-looking shortcuts. However, this is not the same method typically used to create shortcuts. The content below shows two new shortcuts that will open up Google Maps to the address of either home or work.

The thing that stands out to me most is that this format looks perfect for Launcher Shortcuts, which Google temporarily tabled for a future release. The explanation from Google suggested that the feature wasn't ready and that it would be "deferred" to a future release of Android. Considering the relative simplicity of implementing the feature, this sounded like a polite way for Google to walk back a feature that had become too closely compared to Apple's own version using 3D Touch, meaning we'd probably never hear about it again. However, we may see it return after all, but with a new syntax; and with the increasing likelihood that Android 7.0 will actually launch as API 25, Launcher Shortcuts may even become a part of Nougat after all.

Google employs a cartoon yeti as a virtual tour guide in Verne: The Himalayas