There's a new version of the Google Play Store rolling out to users right now, but it doesn't appear to be brimming with any big, bold new features. However, there are some interesting bits and pieces floating around inside of the APK that point to some of the things we can look forward to in the future. A teardown of v6.9 points to a built-in app streaming interface and a custom purchasing experience for Cardboard. There are also quite a few odd little tweaks to various other things. We're still looking for more changes, so hit the download link below and take a look around for yourself.

Quite some time ago, Google got on board with Amazon's once-unique concept of streaming apps so users could get a feel for how a piece of software would look and work before installing it. Keep in mind, this isn't the recently announced "Instant Apps" feature that loads only a small piece of an app, this actually runs the app on a remote server and shoots an image back to the user so they can interact with it as if it were installed. 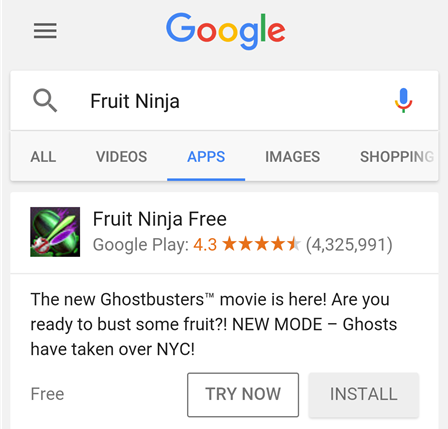 Oddly, Google basically buried app streaming in the 'apps' tab of Google's search results. Not only that, but the selection of apps and games that could be streamed was woefully limited. It wouldn't be surprising if most people had forgotten about this feature, or never even knew it existed. Well, people are going to know about it soon, because the app streaming capability is going to be directly integrated into the Play Store.

The experience appears to be very similar to what users would get today with web results. A "Try now" button will appear on the detail pages for apps, and it launches a video feed to a custom starting screen chosen by the developer. There's a 10-minute time limit to try out any app or game, after which users are encouraged to purchase the game to continue playing.

This is obviously a good, frictionless way to quickly trial a game or app. It's not that installing an app is that hard, but some people may be turned off by the prospect of purchasing something they might not like and then taking the steps to refund it.

It should go without saying that many apps still won't offer streaming as an option to try them out. Google has only offered this feature to select developers in the past. It's likely Google is planning to open streaming to a much larger group of developers in the near future, but many apps don't lend themselves well to a 10-minute trial or using them remotely, so the selection will likely stay game-oriented.

Gone are the days when Google had to provide a store experience to just phones. Tablets came first, then televisions, and in the very near future, virtual reality.

Cardboard began laying the groundwork for the upcoming Google VR. Like any platform, both of these depend heavily on developer support and apps that are easy to find. Late last year, the Cardboard app gained a pretty cool screenshot experience based on Photospheres from inside of apps, but users still had to pull their phones out of the headset to navigate recommendations from within the Cardboard app. From this lesson, it looks like Google is taking steps to give a more integrated experience to users in the virtual world.

The evidence is limited for now, but a UI for making purchases in a VR setting is in the works. It's not entirely clear if this is meant for Cardboard, Google VR, or both. Cardboard-related code has used both "vr" and "cardboard" in namespaces in the past, but with Google VR so close, it's perfectly reasonable that the two may be related. It's worth noting the screen orientation, which will be locked to landscape.

For now, the interface is probably meant mostly for servicing in-app purchases, but it can easily extend to buying apps in the future. Maybe this will become a part of the full browsing and buying experience someday.

The rest of these items are a bit simpler or follow-up on previous teardown sections, so they will remain pretty short. Nevertheless, some of these are well-worth keeping an eye on.

We've seen a couple of hints that Google may be using a new SDK version, and now the Play Store basically confirms it. After the first few Android N Developer Preview builds had cycled through, Google formally declared that Android 7.0 would be API level 24, even allowing developers to distribute apps through the Play Store targeting that version. Of course, the API levels and SDK versions are basically synonymous, which means most of the apps going through our teardowns over the last couple of months have targeted SDKs identified as either 'N' or 24, but this one targets 25.

What does it mean? Well, in all likelihood, developers at Google probably determined something in the API was incomplete or required some additional tweaks. Since API Level 24 has already been finalized, the appropriate solution is to rev it to Level 25 and move on. Does this mean Nougat will actually launch as API 25? We have really good reasons to believe so. This shouldn't cause any problems for developers already targeting and distributing apps that target API 24, but may mean there are a few special changes between the versions that require further examination.

A couple of months ago, we reported on an interesting optimization feature Google had started to work on with the Play Store. It would allow the app to preload some data over Wi-Fi, which would lower data usage over cellular and improve performance. At the time, it was limited to 20 MB of data, and a later version bumped it up to 30 MB. It seems that somebody decided it was a bad practice to lock in numbers like that, so the number will now be determined by Google.

Yeah, it's a silly change, but I had to include it now that the string has changed multiple times without making its grand debut.

While there's nothing to indicate what this is, it's just curious enough to warrant a quick call-out. There's a string related to something called "the new TC project." Evidently, Google is testing it.

This string has been translated to all of the different languages, which doesn't usually happen with very many things that are still in early testing. However, it's still not used anywhere in code. There's not much more to say about this one cryptic string, but as always, we'll keep a close eye on it.