It has been about six weeks since the last YouTube Gaming update rolled out, and it's clear the developers have been keeping pretty busy on making changes. The latest update has quite a few improvements to be found throughout the app, not to mention at least one feature that might be considered pretty huge. Topping the list is a new live comment stream that overlays gameplay videos so you can see the action and watch the commentary at the same time. A few features have been moved to more convenient places and a video history is now available. Finally, there's a new easter egg, and it's pretty awesome. 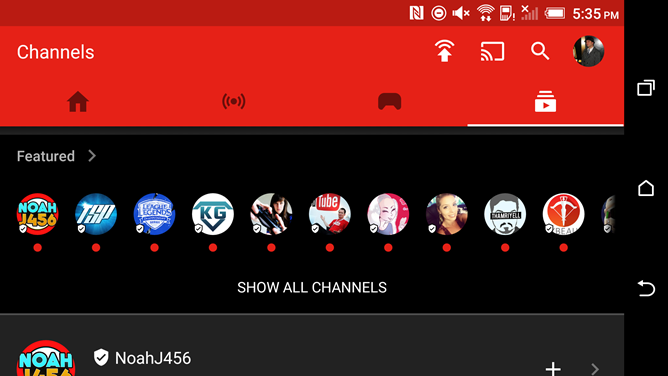 Some apps are notoriously locked in either portrait or landscape orientation. It doesn't usually make much of a difference in something like Opinion Rewards, but in an app dedicated to video, which is often best viewed in landscape, it can be a little awkward for most of the interface to be locked in portrait. (Note: it has always been possible to rotate into landscape for videos; it's the rest of the UI that was locked in portrait.) Version 1.5 changes that, giving us the rotational goodness many users have been craving. 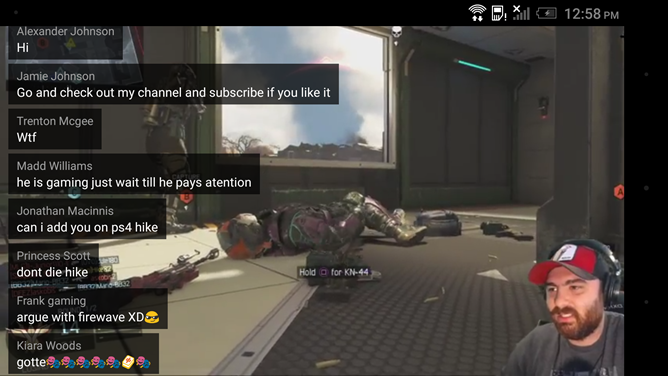 While the comment sections on YouTube videos aren't known for being friendly, civil, or even grammatically comprehensible, you might be surprised to find out that the words traded during live broadcasts are often friendly and sometimes quite uplifting. Live gaming broadcasts are still going strong and the audiences love to chat while watching the show. But if you're stuck on a mobile device, you've always had to choose between portrait orientation with a tiny video screen at the top and just a few comments scrolling up from the bottom, or forgoing comments all together to watch a full-size video in landscape. The latest version does away with that choice and gives you the option to stack those comments right on top of the video so you never have to leave the action.

The screenshot above shows exactly what to expect. Comments are drawn on top of the video and scroll through automatically. The dark backgrounds are semi-transparent so most of the gameplay is still somewhat visible, even if only barely.

Switching on this mode for comments is as simple as rotating into landscape view, tapping on the screen to get the heads-up display (pictured below), and tapping on the new comment bubble icon (on the left side of the main actions). The comments only show up on top of the video in landscape orientation, so rotating to portrait will send them back to their normal location. However, the comment toggle survives rotations, so once it's set, you can switch back and forth without reactivating it. The setting isn't sticky between videos, so it will have to be re-enabled on videos where it's desirable. 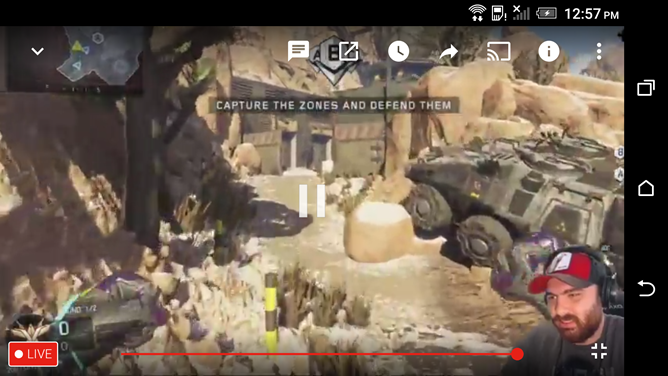 If you look to the second screenshot in the previous section, you'll also notice another new button right next to the chat toggle, but this one is a bit more familiar. It's the popout player that was first added in YouTube Gaming v1.3 back in March. 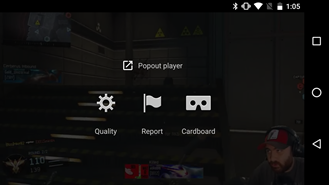 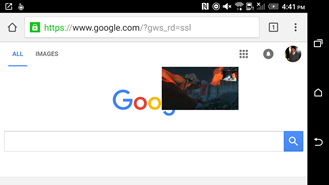 The popout player used to be hidden in the overflow screen that you can only reach after tapping to view the heads-up display on the video player. Nothing functionally has changed, but the button is now more accessible and probably a bit more discoverable. The old popout button has been removed from the overflow screen. 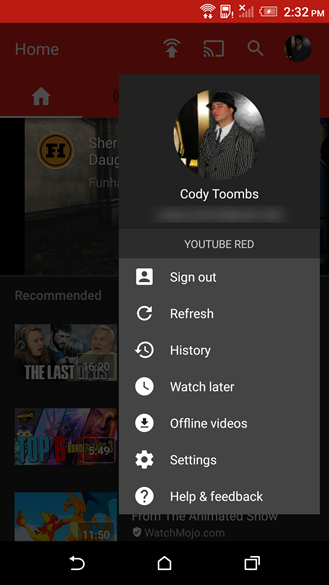 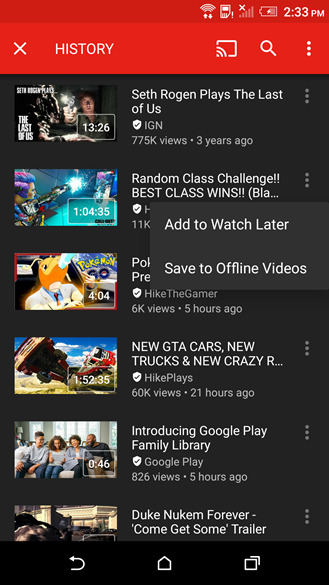 If you've ever looked at your watch history in the regular YouTube app or on the website, you should already know what this is. If, however, you're brand new to YouTube, let me be the first to welcome you to a magical place filled with how-to videos for mundane activities, clickbait "fail" montages, and inexplicably popular lifestyle vlogs.

Anyway, every video you watch is placed on a list that works just like your web browser history. You can get to it by tapping your profile picture at the top right of the screen and then tapping the new 'History' button in about the middle of the list. If you would like to pause or shut off watch history, or clear it entirely, just go into Settings –> Privacy for the appropriate options. 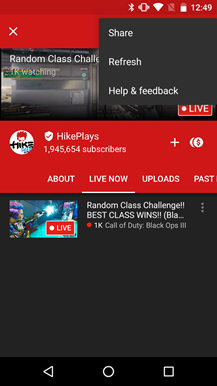 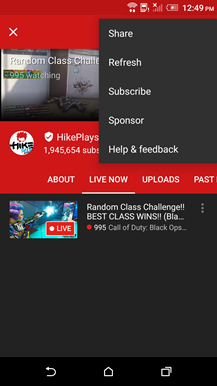 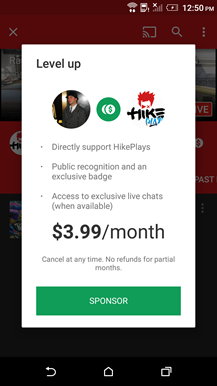 Like the popout player button mentioned earlier, a couple of other existing features have been given new ways to access them. The overflow menu on the channel screen has been given a couple of new commands: Subscribe and Sponsor. The Subscribe command obviously adds the channel to your list of subscriptions. It performs exactly the same function as the little '+' button visible just below the overflow menu in the first screenshot above.

The Sponsor command opens up the subscription-like donation service some channels encourage for their followers. Again, this feature is already accessible from the little coin icon next to the '+' icon.

Why add these to the overflow menu? I'd have to assume it's to make them more discoverable. It's not that they are more visible than before, but now they are displayed as words instead of icons, perhaps making them approachable for some types of users. 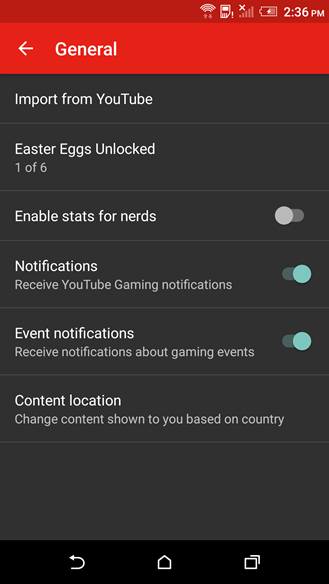 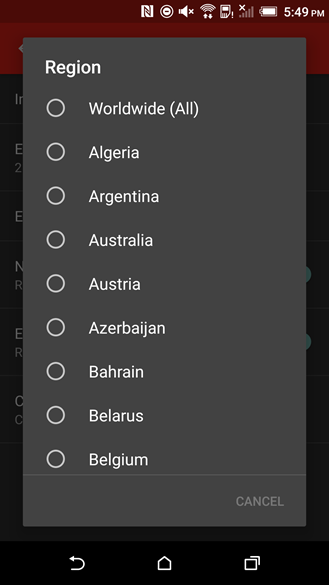 Another feature making the jump from the regular YouTube app is a selector for content location. This allows you to control the general likelihood of getting videos in a certain language or targeting a particular nationality if you choose a country from this list. Basically, if you need to use this, you probably already know what it is and why.

YouTube Gaming has a tradition of adding a new easter egg with each incremental version. Following in the tradition of Android itself, the easter eggs are alphabetical, always relating to a game or franchise with some kind of historical significance. The first reference was to Asteroids, the second to Battletoads, and so on. This leads to the hint for this version: the name of the game starts with an F.

I've already discovered the answer, but I don't want to ruin the fun of looking for the easter egg for anybody that enjoys the hunt. If you'd like to jump straight to the solution, expand the section below and rack up your next easter egg point.

This one wasn't at all hard for me since I was a huge fan of the original and some of the subsequent entries into the franchise. In fact, I dare say that this was almost the most obvious game for an easter egg since Asteroids. 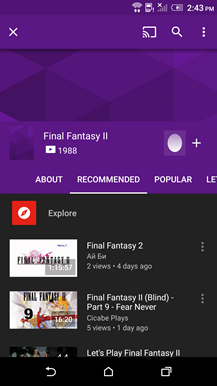 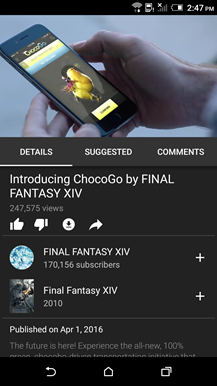 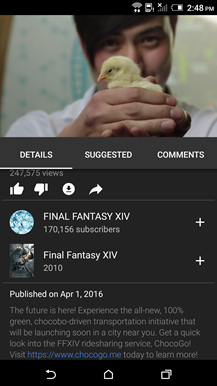 The game is Final Fantasy II. That's right, for some reason they chose the sequel. The original doesn't seem to appear in search results, which may be the reason. All the same, I think IV would have been the better choice. I mean, seriously... Who didn't love the Cecil story?

Anyway, to score the point, just search for "final fantasy ii" and look through the results. You'll want the one from 1988 with the dark purple background. Open the details page and look for the little white egg next to the '+' symbol. As soon as you tap it, the point is silently awarded and a video will begin playing. If you have about 90 seconds, it's worth sticking around for the video. It's an April Fool's joke about starting an Uber-like company named ChocoGo that uses – you guessed it – Chocobos as a means of fast, environmentally friendly conveyance.

Chromecast's Fast Play Content Prediction feature has been delayed, still being worked on

LEGO Star Wars: The Force Awakens beeps and bops its way onto Android