BlackBerry is sticking with this Android thing despite sales for its first phone not being particularly stellar. Now, there's a second BlackBerry Android phone, the DTEK50. Unlike the PRIV, this one is mid-range and costs just $299. Also unlike the PRIV, it doesn't look like BlackBerry designed or built this one. The DTEK50 is a rebranded Alcatel Idol 4.

Externally, the DTEK50 is identical to the Idol 4, save for a custom back panel with BlackBerry branding. Everything else is pure Alcatel from the front-facing speaker design to the offset USB port on the bottom. The display is 5.2-inches and 1080p. Inside, the specs are the same too. That means you're looking at a Snapdragon 617, 3GB of RAM, 16GB of storage with microSD card, and a 2610mAh battery. 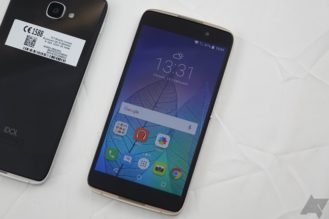 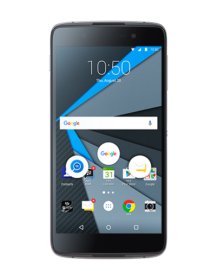 So it seems like BlackBerry is using TCL (Alcatel OneTouch's parent company) as its hardware partner for this device. I'm sure BlackBerry would say it has made some small and inconsequential changes to the design, though. The software will also be handled by BlackBerry, which is an advantage. This listing is actually a bundle—you get the phone (GSM unlocked) and a 12,600mAh battery pack for $300. It will ship on or around August 8th. We don't yet have any dates for the Idol 4.