Sunshine, a popular and unique weather app for iOS, is making its way to Android. The app specializes in providing useful, rather than detailed, information while crowdsourcing for more accurate weather data. While there hasn't been an official announcement from the developers, the app is now open for beta testing. 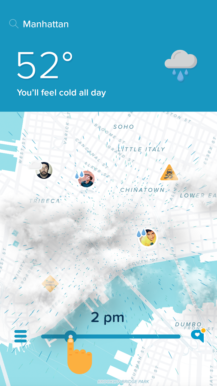 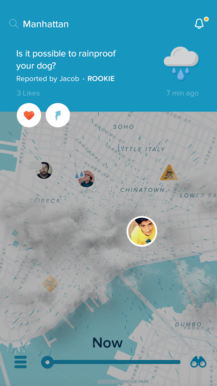 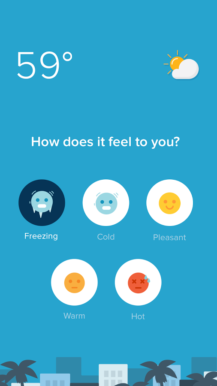 The creators of the app were inspired by their daily frustration of inaccurate forecasts at the local beach. Of course, beach weather i be more difficult to predict than your average place and will quite likely experience different conditions than a sensor that is, say, 15 miles inland. But that obvious case turned into a more broadly applicable idea: Why not rely on the people who are already there to tell you what the weather is like? They managed this with some help from the barometric pressure sensor just added to iPhones when the concept was developed.

They coupled what became a quite sophisticated backend, utilizing sensor data from phones to better analyze the onsite conditions all over the place, with a bright and cheery interface for end users. More than just visual sugar, though, Sunshine is all about providing the bare essential weather information in plain terms. "It feels cool," it might say, or "Pleasant in the morning and hot in the afternoon."

That along with a social component in which you can see reports from fellow users on how they feel about the weather is meant to help you do what you normally should be doing in response to the weather, like dressing or planning appropriately.

The same sensors are now commonplace on Android today, so it's a logical step for them to make the leap. Sunshine's beta comes not long after Dark Sky, another beloved iOS weather app, issued a long-awaited Android variant. Of course, many might remember the outrage over how Dark Sky made premium usage of the Android app a subscription compared to the one-time purchase on iOS. Even worse, the interface contained all the familiar elements of Apple/iOS design, which feel out of place on Android.

As far as those things go, Sunshine should be in a better position. It's a free service and their design ports well to Android, given that it never had many signature iOS design features in the first place and it contains the bright colors, clean lines, and use of shapes that look right at home in the world of Material Design. The current iteration still could use a little more tweaking to truly feel like a native Android app, but it starts out much further along than most iOS transplants.

You won't find Sunshine in the Play Store if you're just doing a search. You'll have to sign up for the beta first. Just follow this link to join and Google will give you the necessary instructions from there.

While the app was previously limited to a beta test that required you follow a special link and accept to join, it's now directly accessible in the Play Store. According to the description, it's limited to Canada, but we're seeing it available in the United States as well. If you want to try it, grab it from the widget below.