If you ask Motorola, Mods are the story with Moto Z. If you ask most smartphone enthusiasts? The Mods are decidedly not the story - they're just accessories. Well, which is it? Are Motorola's modular pieces central to the authoritative and complete Z experience, or are they forgettable add-ons? I've had a few days to play with them, and while I am not "reviewing" any of them here, I am going to share some thoughts on them.

First, we have the not-really-Mods: the style shells. 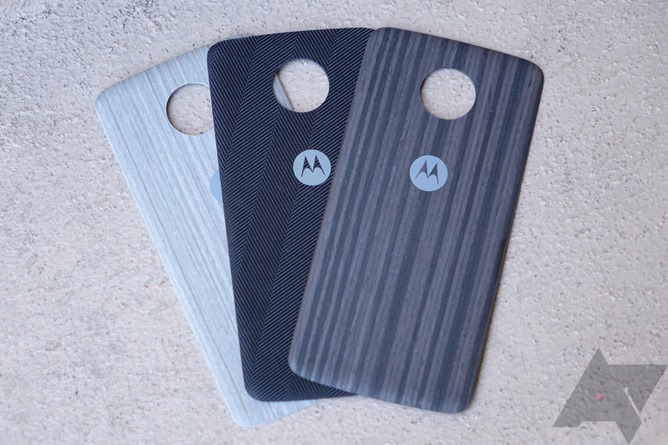 Moto sent out two woodgrain shells and one that I would describe as a black nylon fabric weave. I'm not a fan of the wood shells - even if they are "real" wood, they're slippery, show fingerprints more than I'd like, and really don't seem to gel with the overall aesthetic of the Z and Z Force. They just look... weird. The black nylon, on the other hand, is nice and grippy, shows no fingeprints at all, and is decidedly unique in terms of a smartphone cover material. It's nice. Unfortunately, I can't share any pricing or availability info about any of this stuff today. Just impressions and general thoughts - sorry, guys. (Though the projector is rumored to cost $300, the speaker $80, and the battery packs $90 or $100 without and with wireless charging, respectively)

Moving on to the functional mods - the speaker, the projector, and the battery - do any of them stand out as particularly, well, good? I think that's a tough question to answer. The InstaShare projector works, but at the rumored price of $300, does anyone actually care enough to buy one? Especially a projector that must be physically attached to your smartphone in order to be used? 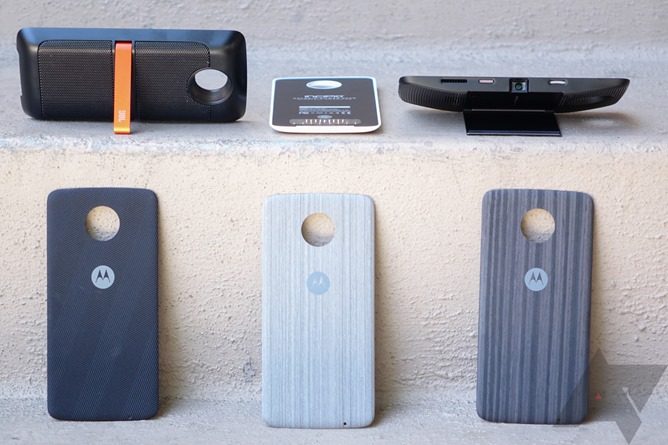 And that's actually something that has bugged me about all the mods: they are inherently not designed to be used alone or together. They must be used physically attached to a Moto Z device. Let me see if I can explain what I mean by that a bit better.

The Power Pack, for example, is probably my favorite Mod. It's simple: it gives your phone some extra juice by keeping the internal battery at either 100 or 80% ("efficiency mode" to increase charge cycle life) charge until the Mod itself dies. But wouldn't it be even more useful with a USB port to charge other devices? How difficult would that have been to implement? As is, the Power Pack Mod must be charged when attached to a Moto Z device, because it has no charging input port - it must charge itself through the phone. It doesn't have a traditional battery indicator, either - just a little light that flashes either red or green, the meaning of which is not inherently clear. 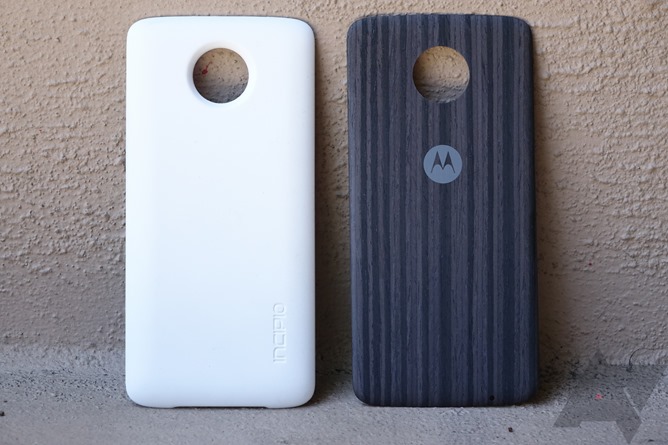 The InstaShare projector feels utterly hobbled by the fact that it can only be used when attached to the phone - who wants a projector that's going to shake and move every single time you touch your smartphone? If you want to watch a video or movie with the projector, but then you get a text, wouldn't it make infinitely more sense to use something like the Cast protocol to allow the projector to truly "stand alone" from the phone? Sure, it's nice that it can be attached directly for a completely live and direct screen stream from the device - but wireless would have clearly been the superior implementation here. You can't even easily use your phone to advance slides in a presentation with this arrangement - you have to walk up and touch the phone every time if you don't have a dedicated Bluetooth remote. Using the phone as the remote is clearly the more desirable solution. 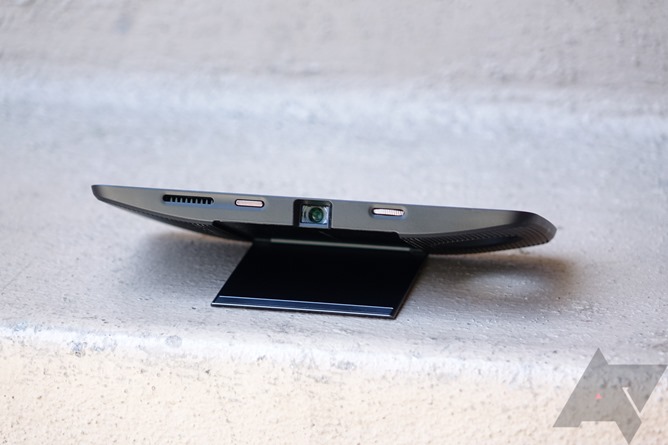 As for the JBL speaker mod, well, at least it doesn't sound like it'll be too expensive. $80 isn't terrible, I'll grant you that. But again: you can't use this speaker unless it is physically attached to the phone! Want to change tracks? That means you have to go to the phone to do it, which is theoretically placed where you'd want a Bluetooth speaker to be, not where you'd ideally put your smartphone. Why couldn't the speaker do Bluetooth or a direct connection to the Z? This would have made for a vastly more flexible end product. You could even use it with other smartphones. Bluetooth is far from a difficult technology to implement, and not an expensive one, either - cheap Bluetooth speakers can be had for well under $30 on Amazon, so cost isn't much of an excuse. 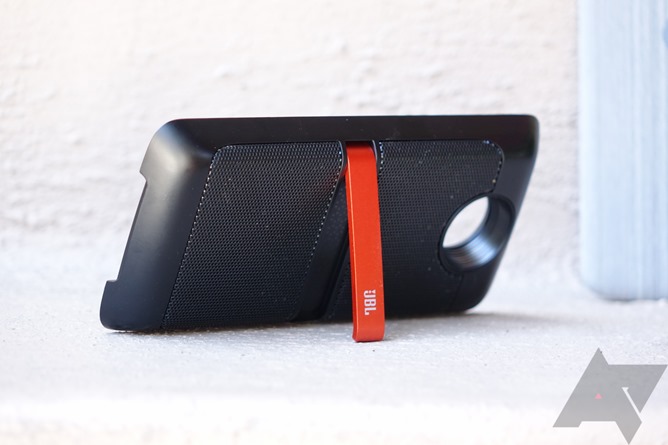 Perhaps more disappointing yet is that none of these Mods can work together to achieve anything: you can use one and one only. Imagine if you could use your Power Pack to supplement the InstaShare projector's 1100mAh internal battery for longer viewing sessions - that'd be kind of cool. Or if you could use the projector and the speaker Mods at the same time, creating a sort of personal "mini home theater" effect? Even I'm mildly intrigued by that. 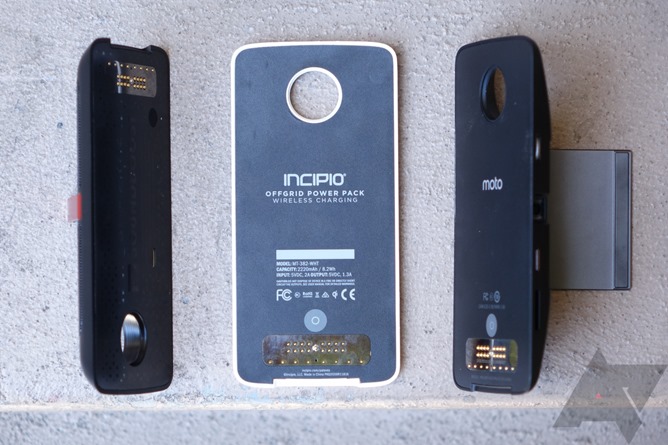 Moto's Mods could be so much more together, but as is, they feel a bit limited.

I realize this is a first generation product and that Motorola has focused on making these Mods work as they've designed them. I'm not commenting on their particular effectiveness in their respective tasks - this isn't a review - but I still can't help but think that for all the things Motorola has done better than LG did with the G5's friends, the Mods still fall rather short of the promise of true modularity. They're certainly not useless, I just think they could be so much more useful - and flexible - than they are. 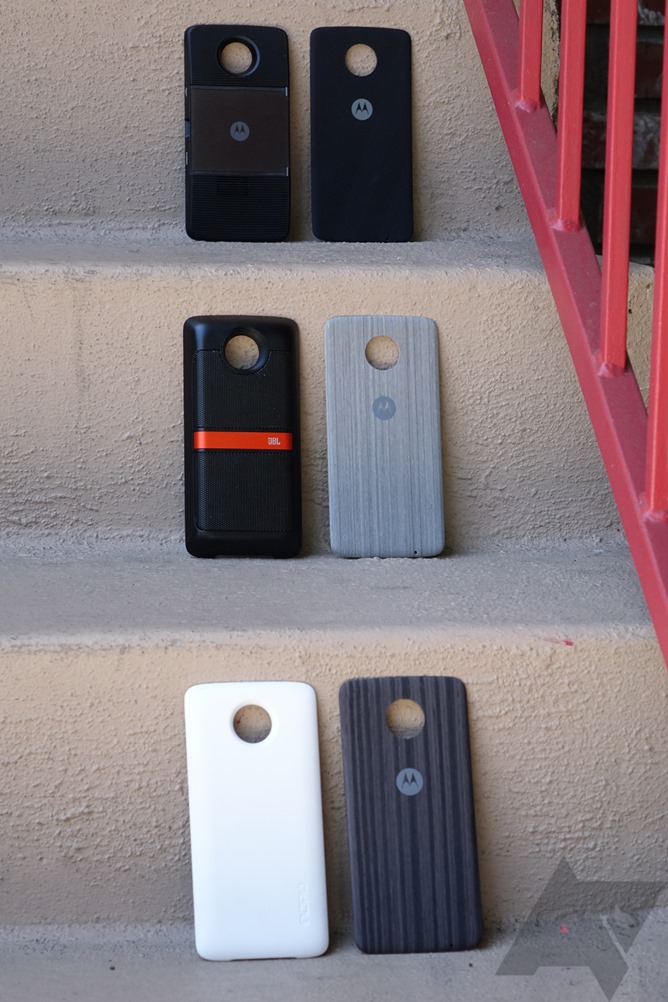