Folks who chose to get an LTE-enabled tablet from T-Mobile and went with the Galaxy Tab S2 are starting to receive an over-the-air update bringing Marshmallow to their device. For a few months at least, users will get to have the latest and greatest on their Android tablet.

The update bumps the Tab S2 up to software version T817TUVU2BPF1. As part of the update, users can get improved battery life thanks to Doze and per-app permissions for more control over your apps. You also get Google Now on Tap and the other highlights on Android 6.0. 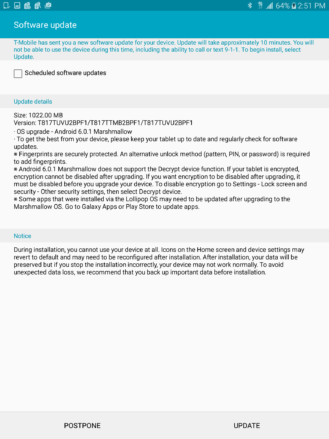 The Verizon version of this tablet received this update at the beginning of last month. AT&T started sending out an OTA over the weekend. Now it's T-Mobile's turn.

The update can take a few days to arrive on your device. Feel free to hit up the changelog below while you wait.