Updates to the Play Music app have been steadily rolling out, but there hasn't been much to tell for about the last six weeks, ever since podcast support was added to Android Auto at the beginning of June. Bug fixes and very subtle tweaks seem to be the theme. The latest update to v6.11 doesn't deviate too far from this trend, but there is a small addition to the UI and a few clues to discuss in a teardown. 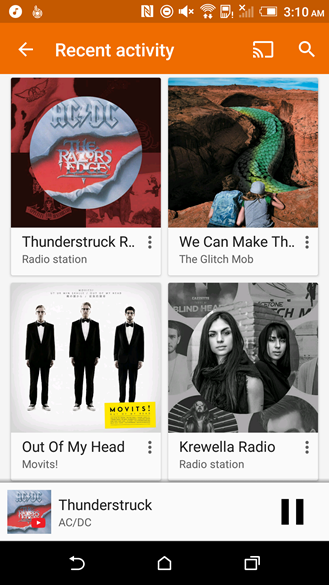 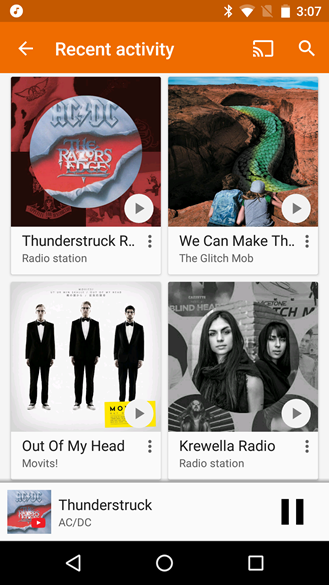 If you've ever found it inconvenient to tap on an album or radio station and wait for a new page to load before starting some music, this one's for you. Look around the Play Music app at just about any screen that shows the half-sized cards for albums or radio stations (and isn't the main landing page), and you'll see a plethora of Play buttons covering the bottom-right corner of their cover art.

They do exactly what you might expect: start some tunes. The same buttons have been gracing other parts of Play Music for some time, but now they're accessible in a few more places. – Thanks, Zachary Kew-Denniss.

People use music for many different things. It can inspire you, be a background track for work, or keep you awake on a long drive. It can also be used to ease you into a restful sleep. But once you drift off, there's usually no need to keep it playing for hours. Wouldn't it be great if we could have Play Music kill the sound after we've entered la-la land? That's exactly what Play Music is going to get.

The principle of a sleep timer is pretty basic and most people are probably at least familiar with seeing the option on their television at some point, even if they don't use it. Basically, users start some music and set a timer, then Play Music will automatically shut off playback on its own.

The lines above show that there will be a whole screen dedicated to settings for a sleep timer; unfortunately, none of the options are listed yet. It's also clear there will be a dialog box with the options to start or cancel a timer, or close the dialog. There will probably be a button or menu command that opens this box.

As it stands right now, the sleep timer is definitely unfinished. There are no options listed for the preferences screen, no sign of a way to set a duration for music to play (e.g. 30 minutes) or a specific time to stop the music (e.g. 1:00 am), and no other text for even the basic features. In other words, it's pretty clear we're not getting the sleep timer without another update.

This one is a little bit of a guess, but it looks like Google is planning to automatically pick some music for users when they connect a pair of headphones (or some other audio output device). The new strings belong to a setting to enable or disable a notification. When permitted to appear, the notification will present a recommendation based on past listening.

There's not a lot to go on, but it's a pretty logical step to assume the idea here is to make it almost automatic for users to launch Play Music from the notification shade rather than hunt for the app and then look for something to play.

Another fairly mysterious setting also turned up, this time only with the name "PB." (Yep, this is a big teardown for settings.) As far as strings go, there is only the shortened name, a key, and a line from the settings page.

After digging around in the source code for a bit, it turns out that this setting will be used to determine if Play Music should resume a previously interrupted track or playlist if the right criteria are met. There are a number of variables, like whether or not a user is returning to Play Music from the lockscreen or if the system's media volume is set to zero. There's not much more to add about this one, but it might be a good setting for people that don't like music to resume after a call.

And finally, this one's not a feature, but just a funny little thing. Like most large companies, the things Google is working on have a tendency to slip through the cracks to the outside world. This includes so-called dogfood (and fishfood, bugfood, and cakefood) versions of apps, which are meant to remain confidential, but have been accidentally leaked from time to time. Google usually attaches cute icons as a reminder that employees and testers are on a non-public version. Sometimes, there's also a warning message like the one below, meant to further emphasize secrecy. What makes this one worth pointing out? The text for the button to clear the message reads: "PINKY PROMISE."

Ok, I know it's silly, but it brought a smile to my face when I read it. There's nothing wrong with a little light-hearted humor.

Hangouts 11 lets you invite more people to groups with a shared link (before WhatsApp, for once)

[Update: Italy, Portugal, and Spain too] Pokémon GO is go for launch in the United Kingdom