Inbox has been growing consistently more feature-rich with a mix of new features designed just for its efficient interface and old features that are slowly integrated from its forefather Gmail. There aren't any obvious signs of new features to play with in this version, but there is something for the teardown archives. With the release of v1.27, evidence shows another classic feature will soon make the jump from Gmail to Inbox: the vacation responder.

If you've never used a vacation responder, and can't decipher the self-explanatory name, it's a fairly famous–or rather infamous–feature of almost every major email client or service for the last couple decades. The basic idea is simple: before you go on vacation and leave your email to go unanswered for several days or weeks straight, you leave a message that will be sent back to everybody that emails you. Well, that feature is coming to Inbox.

If you've used Gmail's vacation responder, there's nothing much to say here, this appears to be exactly the same. The strings and layouts match up very nearly perfectly. Given that it has taken so long for this feature to make the jump, it's a little disappointing that it doesn't have some of Inbox's signature additions. On the other hand, maybe the reason it hasn't already launched is that there's still more to come. 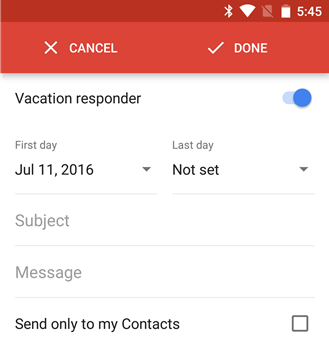 To cover the basics, users can switch on the vacation responder and set start and end dates. During those dates, incoming emails will automatically get back a response with the subject line and message. If you'd rather not give away details of your hiatus to a random stranger that happens to email at the right time, you can hit a button to restrict responses to just those people in your contact list. If you work at a company, there will be a checkbox to limit responses to people emailing from within the same company.

The resources and code are here to run the vacation responder, but it's not active yet. Google could turn it on at any time from here on out, but it may also be held back for some time. I'd still like to think it hasn't been launched yet because the developers are still planning to add some clever intelligence to this feature, but that's probably just wishful thinking.

All told, while it's good to aim for feature parity, this may be one of the few features that's probably not high priority since users could just as easily pop open Gmail to get the job done. Either way, an auto-responder is a very useful tool, so it's good to see Inbox catching up.