We've been expecting some changes to SMS functionality in Hangouts for some time, especially after Google started pushing Messenger as an SMS alternative inside Hangouts. As of Hangouts v11, it looks like the other shoe has dropped. This version of the app removes merged conversations as an option.

To be clear, Hangouts can still send SMS in v11. What it will not do is let you switch between Hangouts and SMS within a single conversation thread. Previously, you could go into the settings and enable this feature. It gave you a neat little drop down in the text field to set how your message would be sent. Now, you just have a separate thread for Hangouts, SMS, and Google Voice SMS, even if all those messages are going to the same contact. 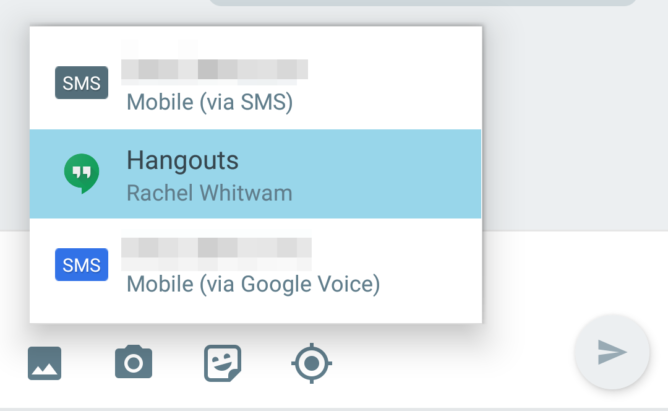 How merged conversations were managed. This is gone now.

Google has a support page up that explains the situation. Apparently, merged conversations was not a widely used feature, and Google found it could lead to confusion as users accidentally sent the wrong message type. Your merged conversations will be automatically split up when you update. Some people will probably be fine with this, but others who liked merged conversations might want to take this as an opportunity to try a different SMS app. We've got the update on APK Mirror if you want to just get it over with.

[Prime Day Deal] Get 30% off the Fossil Q Founder Android Wear watch and 50% off other Fossil ...