The new Verizon plans leaked recently have been made official, and they are roughly what we expected. Verizon is boosting data caps, but it's also going to be charging you more money. The new mobile app will apparently make it easier to manage your plan and bills as well. Speaking of your bills, you'll have the option of paying Verizon extra money every month to throttle your connection to 128Kbps... seriously.

The plan changes will add at least another gigabyte of data to each tier. They will keep the same size-based naming scheme. Here are the new plans compared to the old ones.

All the plans now include Carryover Data, so you can keep unused bytes. However, they expire at the end of the next month (boo). Several features of the updated My Verizon app seem geared at up-selling you on data features—specifically Data Boost and Safety Mode. Data boost is an extra gigabyte of data that you can buy at any time for $15. That's the same as an overage, but it makes sense when you realize what Safety Mode really is.

Safety Mode is the really crazy part. As rumored, this feature eliminates overages by throttling you when you go over the cap instead. However, it costs $5 per month to add this to your plan (XL and XXL get it free). That means you pay Verizon $5 per month to throttle your speeds to 128Kbps when and if you go over. You pay them for this. I think this is pretty outrageous. Verizon is clearly preying on the fear of overages to extract more money from people; you pay this fee whether or not you go over. It's such a clear example of Verizon's arrogance. If you decide you want LTE back, you can pay the $15 for another gigabyte of data (Data Boost). 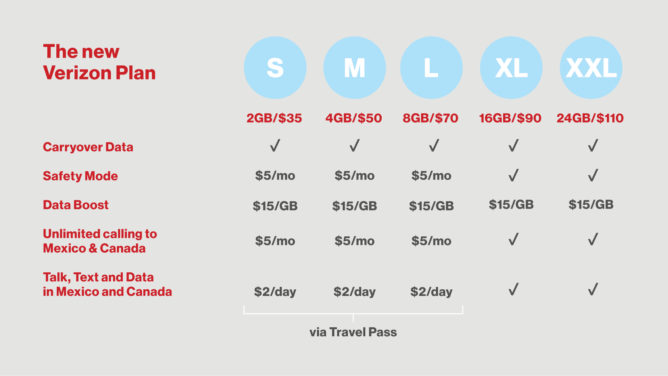 The new plans and features will be live tomorrow, July 7th. Like it or not. John Legere is going to have a field day with this.