Last week I reviewed the largest portable Bluetooth speaker I've ever seen. This week, the speaker we're looking at slots in at the opposite end of the spectrum. It's called the JBL Clip 2 ($60), and you'd need 44 of them to balance the scales with one Braven BRV XXL. Sure it's smaller, but its compact size makes it about a thousand times more portable, giving it a complete different set of uses. Is it any good? Read on and you'll find out.

The Clip 2 is roughly the size of a hockey puck. The front is covered with JBL's characteristic woven fabric with a JBL logo at the bottom so you won't forget who made it. At the top a triangular carabiner is attached to the clip by a translucent silicone ring. With a little fiddling, the carabiner can be removed from the speaker if for whatever reason you don't want it attached (no, you shouldn't use it for mountain climbing).

The sides and back of the speaker are coated in a soft-touch rubber material with a flat finish that resists fingerprints and scuffs. Indented buttons line the circumference of the device. On the right you'll find the power and Bluetooth pairing buttons with a flap-covered MicroUSB charging plug between the two. With the flap closed, the Clip 2 is IPX7 rated, meaning you can fully submerge it in a meter of water for up to 30 minutes. This is an increasingly common feature in wireless speakers, but a welcome one nonetheless. 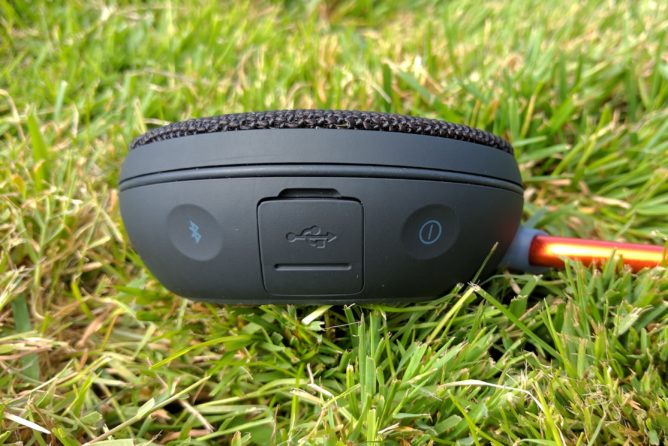 There's a MicroUSB power port hiding under that flap.

Two JBL Clip 2's can be synced with each other by long-pressing the Bluetooth button on each. I only have one, so I can't tell you how well this function works for myself. It's worth noting that the Clip 2 is not compatible with JBL's Android app, so it can't be paired with other JBL devices like the Flip 3, or Extreme.

The volume and call buttons are located on the left side of the speaker. The call button serves a couple other functions beyond answering and ending phone calls. A single press while listening to music will pause music playback, a quick double press will skip to the next track. 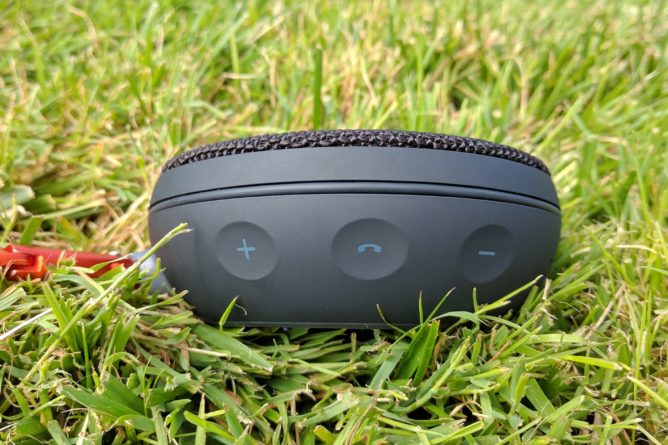 Oddly, these commands would only work while the screen on my Nexus 6P was on. Pressing the button with the screen off doesn't do a thing. That's a bit annoying and really lessens the usefulness of the feature. If I have to turn the screen of my phone on to skip tracks, I may as well control playback right on my phone. Luckily, the volume buttons work just fine whether the screen is on or off.

There is a slightly-raised rubber ring on the bottom of the device to reduce vibration when the Clip 2 is placed on a flat surface. In the center of the ring rests the end of a headphone jack cord, securely nestled in a precisely cut holder. The roughly foot-long 3.5mm audio cord is tucked into a shallow slot that wraps around the outside of the speaker when not in use. 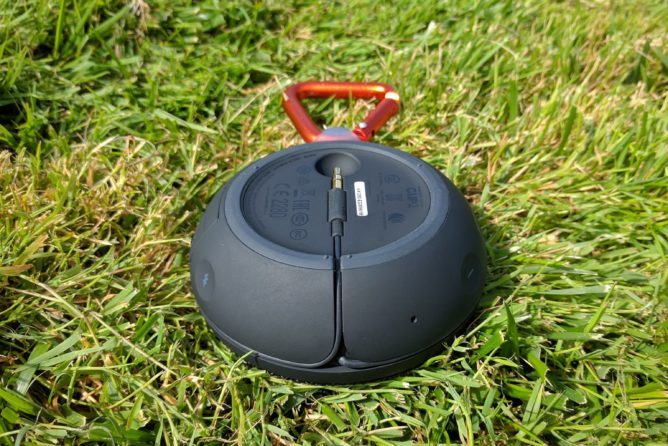 Almost everything has a Bluetooth connection nowadays, so the cord at first glance may seem kinda pointless. However, I found it was really useful for quickly connecting to a friend's phone to watch a YouTube video without fiddling with Bluetooth. It's also handy for connecting to the computers at my work, which all have terrible built in speakers that are barely audible. The way it's stowed by wrapping around the outside of the speaker is also a clever bit of engineering.

This is a great sounding little speaker. Both detail and clarity are outstanding for a device of this size, as long as the volume is at 50 percent or above – at lower levels audio sounds a bit thin and flat. Music is clear and distortion free with crisp mids and way more warmth than this shrimp of speaker should be capable of producing.

Bass, while not overly pronounced, is respectable and controlled. It's not going to give the Braven BRV XXL a run for its money, but it will make any smartphone speaker on the market sound like a singing greeting card by comparison. There's just enough low-end oomph to keep you from missing it, though probably not quite enough to satisfy if you are a bass head. 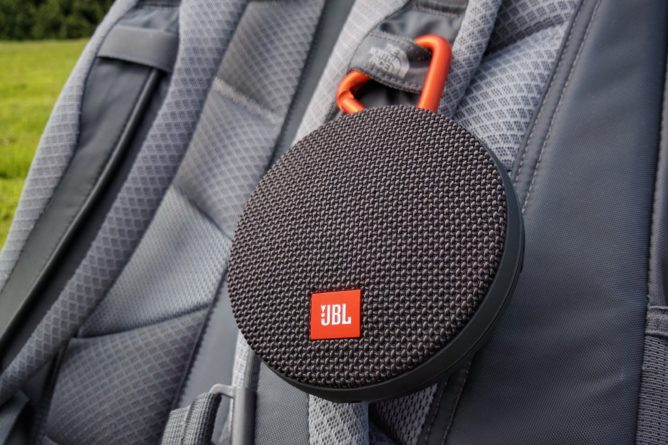 The carabiner is a very useful addition.

The Clip 2 is impressively loud for its size (I feel like I say this about every speaker, but I really mean it this time). It produces ample audio to fill a medium-sized room, or to be heard over the sound of a shower, which is great, because the waterproof Clip 2 makes a great companion for a little bathroom singing. I'd say it's about 60-70 percent as loud as the Flip 3, JBL's next step up in size in their speaker lineup, with about half as much bass. Not bad for a speaker as big around as my palm. 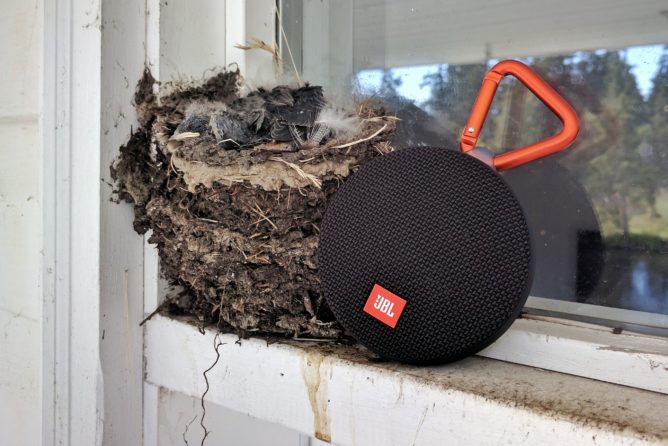 Amazon is flooded with speakers that are about this size, many of which are available for half the cost of the JBL Clip 2 ($60). I've owned and listened to several of these speakers, and there really is no contest, the Clip 2 is the best sounding ultra-portable speaker I've listened to. It also boasts great longevity for a micro speaker with up to 8 hours of playback – that's a full three hours more than the previous generation Clip +. Waterproofing, the attached audio in cable, and let's not forget the carabiner, are all just some extra gravy on top. Besides my one small gripe with the play button, I have nothing negative to say about this little guy.

The Clip 2 is available in black, navy blue, red, teal, and grey. You can buy it from Amazon, or JBL directly. Questions? Let me know in the comments below.