According to investor presentation slides obtained by Xperia Blog, Sony has told investors in Japan at a recent event that the company's mobile business will be further "defocused" in the United States, as well as in India, China, and Brazil.

Sony's Xperia X line of handsets, announced at MWC in February, have been met with critical apathy, if not outright disdain in some cases. Sony announced the X series would be launching in America back in May, and the handsets have not yet begun shipping. This makes the language in the slides almost surprising - Sony is essentially admitting that it will be walking back its US mobile business, what even exists of it, just as new devices launch. 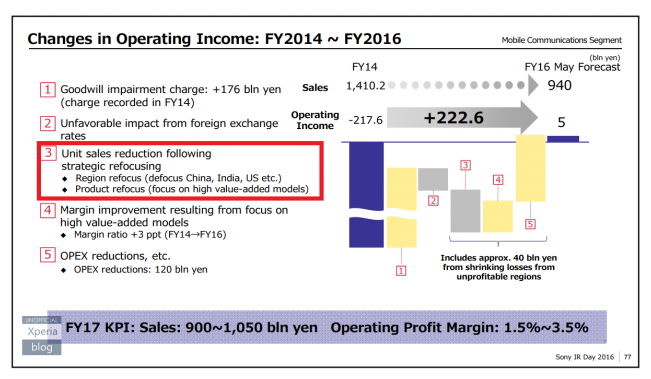 The slides indicate Sony will use fiscal 2016 (Sony's fiscal calendar starts on April 1st) to achieve this intentional business contraction in the markets where it does not see much potential for the mobile business. Meanwhile, Sony will ramp up efforts to market its handsets in East Asia, Europe, and the Middle East. Sony expects Latin America and the Asia Pacific region to continue to generate steady profit and growth.

That Sony sees no real future for its mobile business at any kind of large scale in America isn't surprising. The company's Android handsets have continually failed to attract US carrier partners, essentially a death kiss for an OEM actually trying to profitably sell expensive phones here. While the Xperia X, XA, and X Performance are available unlocked in the US via a number of retailers, it seems wholly unlikely those devices will provide anything above a modest bump in Sony's US sales.

But given that Sony released them at all in the face of this planned spin-down, it probably doesn't mean there won't ever be another Xperia device released in America. More likely: Sony will sell only the phones it believes could generate a profit here, and likely will downsize its support and business units for the US accordingly.