Here at Android Police we've tested devices of all different shapes and sizes. Well, the Bluetooth speaker I'm reviewing today is the largest and heaviest portable speaker I've ever used – by a lot! This is the Braven BRV XXL ($350), and it lives up to its name in both size and sound. Let's have a look, shall we? 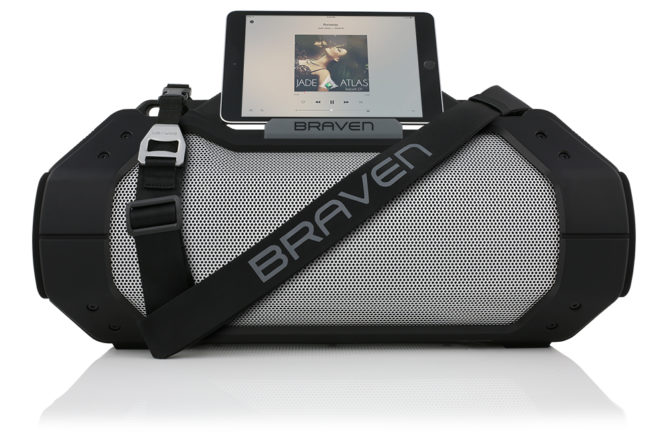 The metal thingy on the strap is a bottle opener.

This thing is absolutely MASSIVE for a Bluetooth speaker. You really can't appreciate its size until you see it in person. The XXL isn't just big, it's also heavy, weighing in at over 18 lbs. That's the same weight as 3 JBL Xtremes, 9 Bose Soundlinks, or 26 UE Rolls! You could take this speaker to a CrossFit class to blast workout music and also use it as your kettlebell. Dual purpose! 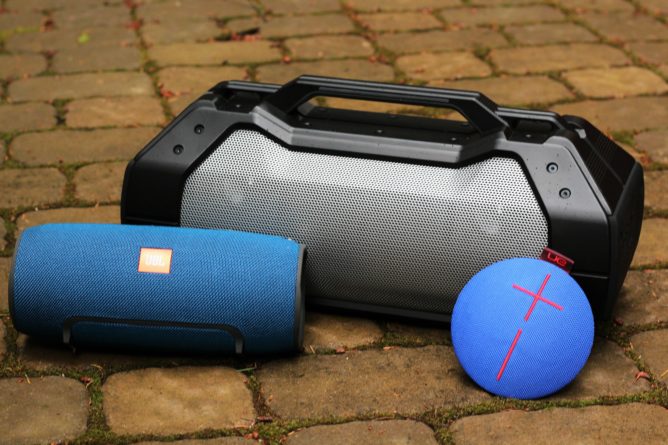 So, why all the weight? The reason for the heft is that this behemoth is packing some serious components under the hood. There are four speakers beneath the metal grill which encases the device – two facing in either direction, a down firing subwoofer, and a huge 15,600mAh battery which will keep the XXL roaring for up to 14 hours.

Braven's speaker is also built like a tank. It's encased in a thick, rugged plastic which wraps around the ends of the speaker and stretches over the top and bottom as well. A long handle that stretches across the top and plastic brackets at either end can be used to attach the shoulder strap. Rubber bumpers on the bottom and both ends of the speaker give it further protection from bumps and bruises.

A couple dozen exposed hex screw heads add to the industrial/utilitarian design aesthetic. I didn't drop test the thing (I didn't want to damage my patio), but it's built so solidly that I have no doubt that it could take some abuse and keep kicking. 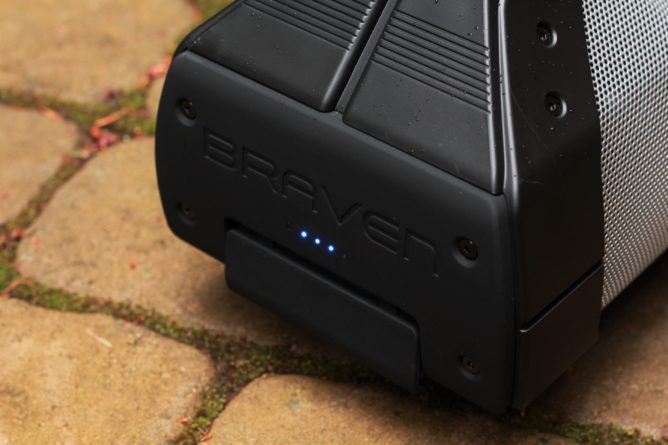 Controls for the XXL are all clustered at one end of the speaker. On the left is a back-lit power button and play/pause button. Up and down buttons for adjusting volume and bass and treble levels are situated to the right. A line of 8 blue LEDs stretches between the two sides, indicating volume/tonal adjustment level.

Tapping the power button while the speaker is powered up cycles through bass, treble, and volume control – each indicated by an LED next to each setting. I'm a big fan of the on-board equalizer controls; it's very rare to see them on a portable Bluetooth speaker, so my hat's off to Braven for including them. 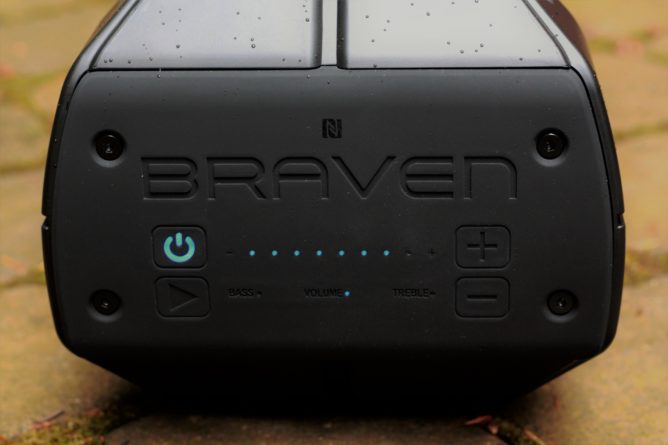 Taken mid-morning on a rainy day. The words are hard to make out even with decent lighting.

The buttons all work well, my only complaint is that they are difficult to see in moderate to low light. The words are etched into the rubber bumper and the black on black writing provides very little contrast. If you take the speaker outside in the dark, make sure to bring a flashlight so you can find the buttons.

Inputs and outputs are found at the opposite end of the XXL under a rubberized panel that protects them from dust and water. From left to right you'll find a 3.5mm AUX in, a 3.5mm microphone in, a 5v 1A USB out, and DC power input.

It's the first time I've ever seen a mic-in jack on a Bluetooth speaker and I think it's a brilliant idea, giving the XXL a second use as a bullhorn (well, third if we're counting its use as a kettlebell). The USB charging port is also a welcome addition, and one that I would actually use since the battery capacity is more than ample enough to spare a little juice for my phone.

Above the ports 4 bright blue LEDs indicate current battery level at 25 percent intervals. The power button and battery indicator lights remain lit whenever the speaker is on; the other LED's light up for a few seconds after a button is pressed and then extinguish themselves a moment later. 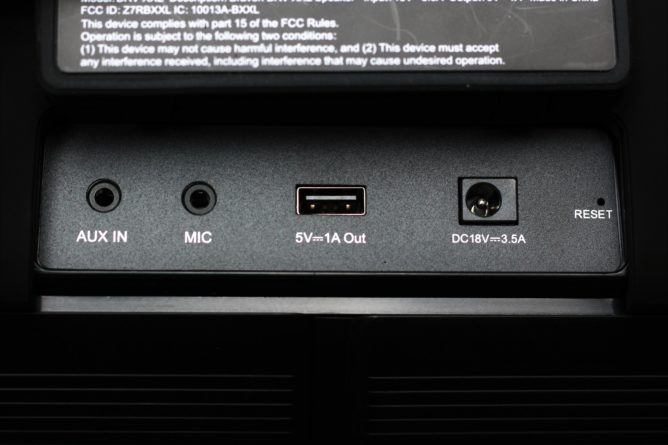 I'm glad you came along for the party MIC.

Listening to the JBL Xtreme and the Braven XXL, one after another, and the comparison isn't even close. The Xtreme will shake your tabletop when pushed to the max, the XXL will shake your house – literally. I had to test the speaker at max volume in the garage because it was rattling the dishes in my wife's china cabinet while I was testing it on the kitchen table to the point that I thought they would fall and shatter.

Now, it's not really a fair contest, the XXL is, after all, three times heavier and at least four times larger. That being said, it's nice to see the added bulk and weight serve a function, and that function is to fuel a party with some sick throbbing beats, which the Braven does with aplomb.

With the bass and volume both turned up to their full power, I expected the XXL to buzz or rattle a little. However, it's put together so tightly (Remember all those exposed screw heads and the thick rubber pads?) that there is only the slightest hint of vibration noise, and I really had to listen closely to hear it. I wouldn't recommend maxing out the bass channel anyways, as it muddies the mids, making vocals harder to distinguish. 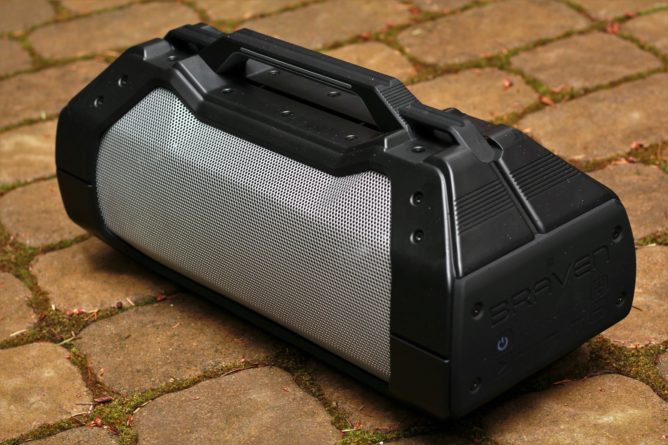 It's not as if you need to crank up the bass to the max to get low-end rumble from this speaker. With the bass equalizer set to the medium, the XXL has plenty of grunt, while still maintaining a fairly well balanced sound profile. Speaking of the equalizer controls, I can't tell you enough how much I appreciate having them on the speaker itself. It's a lot more convenient than having to fiddle with a mobile application.

Strong bass may be the marquee feature of the XXL, but it's also very competent with genres of music that aren't accompanied by low-frequency pulse. You probably wouldn't buy this speaker to listen to The Carpenters while reposing in an Adirondack chair by the lake, reading a book, on a warm summer evening in July. However, if you did, you wouldn't be disappointed – it can sing ballads just as well as it can dance.

The generous size of the speaker cabinet, along with the placement of the speakers at opposite corners, give the XXL an open, natural tone with more stereo separation than most other Bluetooth speakers I've used (which is to say, you can almost hear the two separate channels if you reeeally concentrate). Overall, it's very pleasant to listen to.

So, why would you want to buy this $350 monster of a speaker? In my time with it, several different uses came to mind. This would be a great tool to use at a summer camp, family reunion, beach party, or any other large outdoor event. Not only can it provide a soundtrack to your event, it can also be used as a PA system thanks to the 3.5mm microphone input. 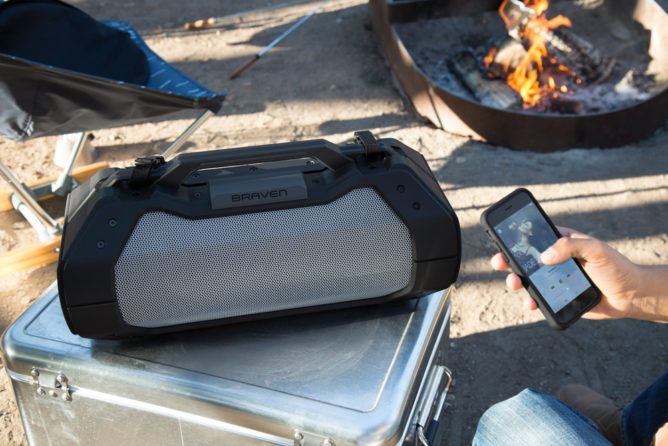 This is a stock image. No, I don't use an iPhone and I have no idea who Jade Atlas is.

The Braven XXL could also make a college freshman the king of the dorms, providing enough power for an impromptu dance party or lively tailgate before a big game. It's even a really awesome speaker for a 30-year-old dad who writes for an Android blog and likes to have dance-offs with his two little boys. Water, dust, and impact resistance means it  may even survive their abuse.

It's big, it's heavy, it's expensive, and a little obscene, but man, I love this speaker. It has been a literal and figurative blast testing it and I gladly give it my full recommendation – just be careful not to strain your back lifting with it at CrossFit. You can check it out, and maybe even buy one, by following the links below.

Qualcomm files a patent complaint against Meizu in Chinese court