A long-standing gap in the Nexus device feature-set for "normal" buyers has been live on-device support. In the event you need help setting up your Nexus smartphone - a smartphone you bought on the internet, not a store - going through the online Google Support documentation or back and forth with a chat agent in the browser is not an ideal experience. Being able to share your screen with an agent who can see what's happening on your display is a lot easier for many people, and it helps support agents resolve issues more quickly by having direct visual access to a user's device.

Meet Google Support - at least, that's what the app is called for now.

We rate this rumor a 9 out of 10 confidence level. The source here is one that has been reliable in the past, and the nature of the evidence they have provided is, in its context, extremely compelling. However, we feel obligated to subtract points for the following reasons.

Finally, Android Silver buyers will get access to a "hangout assistant" - think Amazon's Mayday button - offering 24x7 live hangouts with Google specialists who can take over your device to help you solve problems.

As such, it seems Google may have shelved this idea for some time after Silver was quietly axed (or iced). But we feel it is very likely that Google plans to debut this feature on the upcoming Marlin and Sailfish Nexus smartphones built by HTC.

Well, if you see the hero image - that's what we've got. Here's a full-size of the screenshot. Please be aware this screenshot is a mockup, as such, it may not perfectly represent the final design of the app, and the app itself may change substantially in appearance or functionality before it launches. 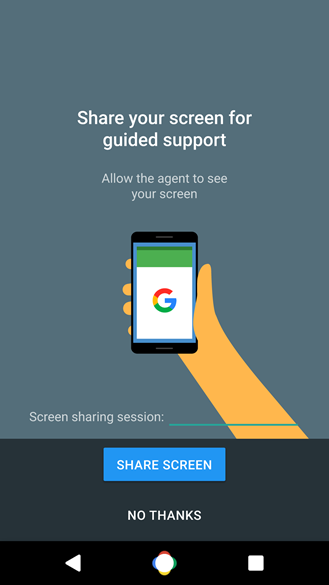 What can we glean from this? Well, not a lot - you can share your screen with a support agent, obviously, but we don't know too much else about the service at this point. Presumably, live audio or chat would be part of the experience. Whether agents will be in any way able to control, draw on, or highlight the screen isn't known, either.

At this point, we're assuming this is an experience for Nexus devices. Google does not provide live chat or phone support to non-Nexus devices, and it would be awfully strange for them to suddenly open up a live on-screen support experience to all Android hardware. Not to mention it would be all but logistically untenable.

This appears to be yet another sign that Google is doubling down on making Nexus devices more mainstream and accessible to non-enthusiast smartphone users. A live support app is a key piece of the puzzle when trying to build a "full-service" smartphone experience. If the Google Support app launches with the release of the HTC-built Marlin and Sailfish Nexus phones, that means you'll be able to buy a phone from Google, buy phone service from Google (in the US), buy a warranty from Google (in select countries), and now get live on-device support from Google.

Android Silver may be dead, but it seems that its vision of providing a highly-integrated purchasing and support experience may live on with Nexus. We'll certainly let you know if we hear more about Google Support.