New York City's Pride March is scheduled to take place this Sunday the 26th, and Google is all ready to join in. Android's "be together not the same" slogan champions acceptance and celebrates difference, something that falls in line with the message of Pride. And with the Orlando shooting's black cloud looming over everyone, it's nice to see Google already excited and ready to grab its rainbow flag and stand proud.

At the corner of Christopher Street and 7th Avenue in NYC, there are two new billboards for Android filled to the brim with more than 80 different homescreen setups — some, if not all, of which have been made with Nova Launcher (which happens to be on sale now, happy coincidence!). Our own Liam was on the ground, and he got up close, looked, and verified that, and he would know because he is the designer behind Nova's looks (Kevin Barry is the developer). 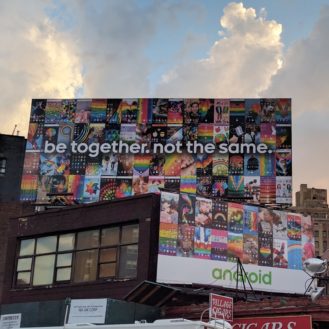 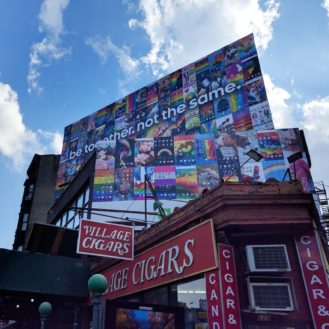 The billboards, which were put together by ad agency droga5, creatively use all kinds of wallpaper images and app/widget setups to celebrate the LGBTQA (and other letters) community. There are photos and graphics showing love, under all its forms, funky droids and symbolic illustrations, and plenty of flags.

The rainbow flag is sure predominant, but as some commenters pointed out to Liam, there are other flags there like genderqueer (screenshot above the h in "together" with the 6:00 timing), transgender (screenshot above the a in "same"), and gender fluid (bottom panel, bottom row, 4th screenshot from the left with the 11:47 timing). There might be more there that we didn't spot.

Great job, Google. Now if everyone could take that message of love and promote it over useless hatred...