Apps that accept it 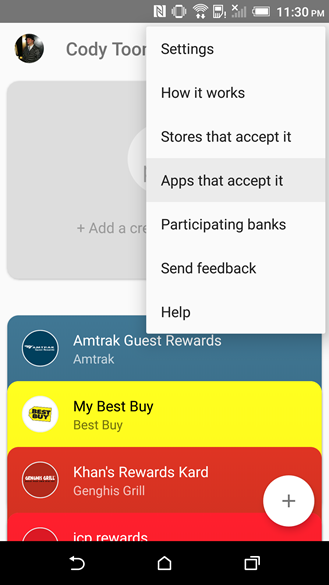 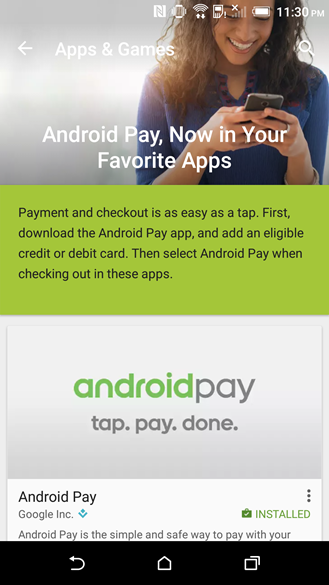 Google's push to get Android Pay into mainstream use has certainly been a struggle, but there has been some good traction over the last few months. While we mostly think of it for contactless payments in brick & mortar retailers, Android Pay is also quickly growing as a solution for online and in-app purchases. Google wants to make it a little easier to discover apps that have implemented support and offer a seamless payment experience.

The latest update to Android Pay adds a new action to the main overflow menu titled "Apps that accept it." It launches into a Play Store page featuring apps that support Android Pay as a purchasing method. The list includes the likes of ride share apps like Uber and Lyft, food delivery services like Grubhub and Eat24, car rental and booking platforms, and plenty of other service and online shopping apps. This is just a list of featured apps, not a full list, but there are about 40 on the page at the time of this post.

If you've been looking for an opportunity to try with Android Pay on your phone, this is the easiest way to identify suitable apps and maybe discover some you didn't know about before.

While we're on the subject of finding ways to use Android Pay, Google is also working on a real-world counterpart to the list of apps mentioned above. Users will be able to open up a map of their current location and show markers for the surrounding retailers that accept Android Pay.

The strings don't really add much of interest beyond the base description of the feature. Of course, it's clearly spelled out that Android Pay needs access to the Location permission (for Marshmallow and above).

While most of us are still a long way from completely abandoning plastic cards and cash, a map full of retailers friendly to Android Pay could certainly inspire some confidence about making a trip through some places with just a phone.

Google announced the launch of Android Pay in the UK at the start of Google I/O, but you may have missed another interesting announcement if you weren't watching the developer sessions later that day. During a slot titled Android Pay everywhere, Google announced integration with Transport for London (TfL), a local government agency responsible for all of the large-scale forms of transit in the Greater London area, and a payment collector at many stations. Apple Pay was the first to launch smartphone-based payments with TfL, and now Google is doing the same. I've got the demo cued up below.

The strings don't really reveal anything about the service that isn't already public. TfL's regular riders can set a weekly limit for how much they're willing to spend on travel, and the trips are compiled at the end of the day to produce a final charge (to reduce transaction fees resulting from multiple separate charges). And of course, the "Map of your journey" string simply refers to the map that is generated for the stops you take during the day–it's shown in the video.

I'm not in London, so I can't test if this is live yet. However, it has been about a month since the demo and it seems the Android Pay team is eagerly moving on this project, so it's probably either live with this release or should be turned on very shortly.

The Android Pay sessions at Google I/O were actually quite dense with demos, introducing various ways Android Pay has grown for users, merchants, banks, and developers. One of the other big additions is a streamlined sign-up process for loyalty and membership programs, including auto-filled data and instant submission. Again, I've got the demo cued up for you.

Obviously, loyalty cards are already supported in Android Pay, but only for existing accounts. This addition will make it possible to create new accounts immediately from within the app. The basic idea is that merchants will design a simple sign-up form for their loyalty programs and customers interested in joining will have their details automatically filled in from a personal profile.

Google Wallet users probably remember that this was actually offered prior to the Android Pay rebranding. However, signups were limited to just a few companies Google had worked with directly. The announcement at I/O points to a simpler integration for businesses, making it easier for them to create and modify forms in a merchant console run by Google.

Judging by the demos, we can probably expect Walgreens and Chili's to be among the first companies to offer streamlined signups, but there will probably be quite a few more showing up after those two go live.

Instagram now has 500M registered users, of which more than 300M use the app daily